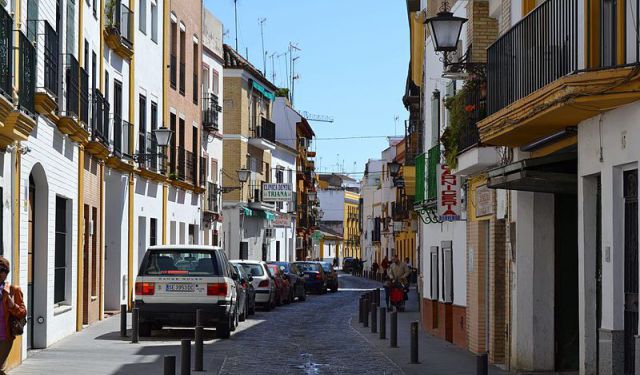 Triana sits on the left side of the Guadalquivir River, a lively and colorful old neighborhood that was once the city's gypsy quarter. Triana is a district that likes to party and it proudly displays its flamenco traditions. This is one of several places in Spain that lays claim to being the birthplace of the music and dance art form.

With paved streets, attractive churches, ceramics and lots of tapas bars, there are lots of reasons to come to Triana. Stop by the Gothic-style Santa Ana church, the oldest church in the city, dating back to the 13th century. Inside, browse many beautiful pieces of religious art, including the spectacular altarpiece from the 16th century.

Walk down Callejón de la Inquisición (Inquisition Alley). Seville was the seat of the Spanish Inquisition, the notorious religious purges that were one of the darkest periods of the country's history. Go over to the ruins of San Jorge Castle, once the headquarters of the Inquisition, but where today there is the Museum of Tolerance.

Seville is also well known for its tile workshops and potteries, industries that date back to Roman times. You will see lots of tiles and tiled art decorating buildings and come across shops where you can purchase beautiful ceramics.

One of the best places in Triana for a drink and some tapas is on the Calle Betis. This waterfront street has gorgeous views over the city and is lined with restaurants, bars and clubs.
Image Courtesy of Wikimedia and Feranza.
How it works: A discovery walk features a route using which you can explore a popular city neighborhood on your own. This walk, along with other self-guided walks in over 1,000 cities, can be found on the app "GPSmyCity: Walks in 1K+ Cities" which can be downloaded from iTunes App Store or Google Play to your mobile phone or tablet. The app's built-in GPS navigation functions allow following this walk route with ease. The app works both online and offline, so no data plan is needed when traveling abroad.

Image Courtesy of Raúl A.-.