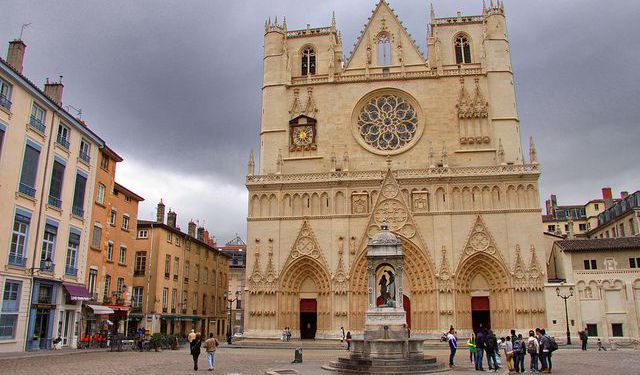 Image by Guillaume Baviere on Flickr under Creative Commons License.

The area in its current form actually dates back to the 16th century and it’s comprised of three small 'villages': St. Paul, St. Jean and St. Georges. Many of their ancient buildings have survived the centuries in good condition. Vieux Lyon has been chosen by UNESCO as a World Heritage site and among its defining features are the Gothic and Renaissance architecture and the traboules. These are networks of medieval covered passageways, some of which lead to hidden courtyards and gardens.

The heart of the district is the St.Jean quarter, which features a number of notable buildings. Visit St.Jean Cathedral, a magnificent example of Gothic architecture. See one of the main highlights of the area, La Tour Rose, a beautiful pink tower. There are also several traboules in this quarter. One of them is located at the base of the tower. In addition to all the sightseeing opportunities, take advantage of the area’s shops and of the hospitality provided by Vieux Lyon's many restaurants and cafés.
How it works: A discovery walk features a route using which you can explore a popular city neighborhood on your own. This walk, along with other self-guided walks in over 1,000 cities, can be found on the app "GPSmyCity: Walks in 1K+ Cities" which can be downloaded from iTunes App Store or Google Play to your mobile phone or tablet. The app's built-in GPS navigation functions allow following this walk route with ease. The app works both online and offline, so no data plan is needed when traveling abroad.