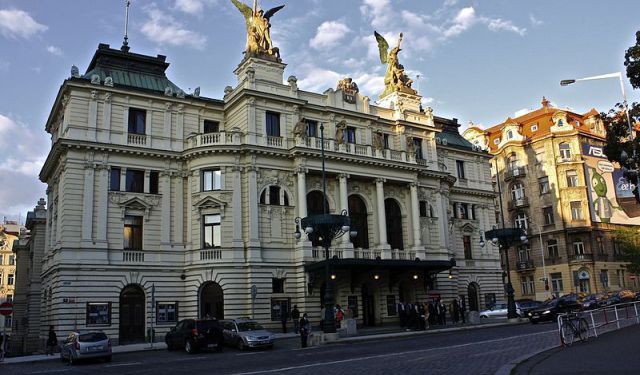 Image by Honza Sterba on Wikimedia under Creative Commons License.

Vinohrady is a wonderful part of the city with a name that means vineyards. Turn the clock back to the 14th century and the area was covered with vines, planted under the orders of Czech king Charles IV. Today, Vinohrady is still noted for its vineyards.

Sample the wines of the region at Vineyard Gazebo, which is surrounded by vine-growing lands. Stay for a meal or snack at the Grébovka Pavilion garden café. Look at its replica of the original 19th-century bowling alley that used to be a part of the family gardens here.

The vineyards and café are located within Havlíčkovy sady, or "Grebovka. This is the second largest park in the city and an idyllic place for picnics and walks among an area of gassy expanses, pavilions, statues and lakes. The park’s design was inspired by the Italian Renaissance and also boasts a grotto, magnificent city views and Villa Grebe, a beautiful Neo-Renaissance villa that stands in a landscaped terrace garden.

Unwind at Náměstí Míru (Peace Square), a serene plaza dominated by the Neo-Gothic Church of St. Ludmila. There are many other architectural highlights to explore while you are in the district. They include the Neo-Renaissance Municipal Theatre of Královské ('Royal') Vinohrady. Admire its two large allegorical winged statues of Comedy and Tragedy.
How it works: A discovery walk features a route using which you can explore a popular city neighborhood on your own. This walk, along with other self-guided walks in over 1,000 cities, can be found on the app "GPSmyCity: Walks in 1K+ Cities" which can be downloaded from iTunes App Store or Google Play to your mobile phone or tablet. The app's built-in GPS navigation functions allow following this walk route with ease. The app works both online and offline, so no data plan is needed when traveling abroad.