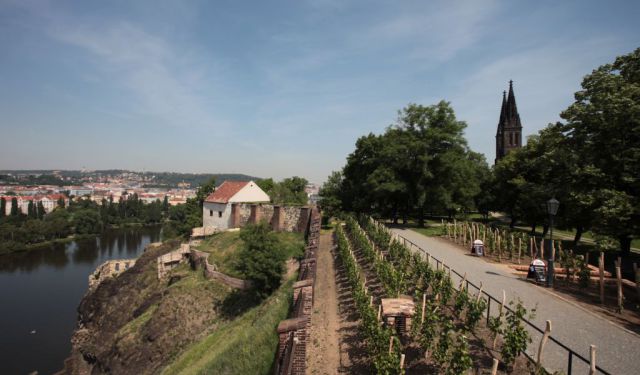 Explore more than 1,000 years of history when you tour the ramparts, bastions and rooms of Vysehrad. This magnificent castle was built in the 10th century on a rocky hill overlooking the Vltava River, and was used as a royal residence up until 1140. There is much to see within its old walls. Visit the Neo-Gothic Church of St. Peter and St. Paul (Chram Sv. Petra a Pavla), originally built in the latter part of the 11th century. It bears a strong resemblance to the Cathedral of St. Vitus in Prague Castle.

Wander through Vysehrad Cemetery, the final resting place for many famous Czech people, such as painters, poets and composers. Among the prominent names who are interred here are the composer Antonín Dvořák and the writer Karel Čapek. Admire the Pantheon or “Slavin" a grand tomb constructed in 1890. Continue your tour of the castle's grounds and see the remains of the Gothic Peak Gate, the Gothic ruins of Libuse’s Baths and the statues of Libuse and Premysl and other Czech historic figures.

Investigate the Vyšehrad Casemates. These are hidden passages within the fortress ramparts where troops used to muster. In addition to the ancient buildings and structures, the castle also thrills with its sweeping views. They take in the bridges over the river, the city and Prague Castle.
Image Courtesy of Flickr and Garrison Gunter.
How it works: A discovery walk features a route using which you can explore a popular city neighborhood on your own. This walk, along with other self-guided walks in over 1,000 cities, can be found on the app "GPSmyCity: Walks in 1K+ Cities" which can be downloaded from iTunes App Store or Google Play to your mobile phone or tablet. The app's built-in GPS navigation functions allow following this walk route with ease. The app works both online and offline, so no data plan is needed when traveling abroad.