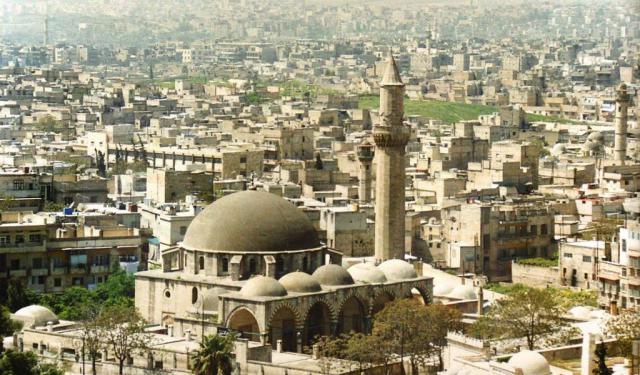 Image by Spielvogel on Wikimedia under Creative Commons License.

There are plenty of amazing landmarks in this beautiful city of Northern Syria. While you may not know it, Aleppo is one of the oldest cities on Earth. Take this orientation walk to see the most popular attractions in Aleppo.
How it works: Download the app "GPSmyCity: Walks in 1K+ Cities" from iTunes App Store or Google Play to your mobile phone or tablet. The app turns your mobile device into a personal tour guide and its built-in GPS navigation functions guide you from one tour stop to next. The app works offline, so no data plan is needed when traveling abroad.

1) Citadel of Aleppo (must see)

The Citadel of Aleppo is a large medieval fortified palace in the center of the old city of Aleppo. It is considered to be one of the oldest and largest castles in the world. Usage of the Citadel hill dates back at least to the middle of the 3rd millennium BC. Subsequently occupied by many civilizations including the Greeks, Byzantines, Ayyubids and Mamluks, the majority of the construction as it stands today is thought to originate from the Ayyubid period. Dominating the city, the Citadel is part of the Ancient City of Aleppo, a UNESCO World Heritage Site since 1986. The citadel rose to the peak of its importance in the period during and after the Crusader presence in the Near East. Several famous crusaders were imprisoned in the citadel, among them Count of Edessa, Joscelin II, who died there, Raynald of Châtillon, and the King of Jerusalem, Baldwin II, who was held for two years.
Image by James (Jim) Gordon on Wikimedia under Creative Commons License.
Sight description based on wikipedia
2

Al-Sultaniyah Madrasa is a large religious and educational complex that has been in Aleppo since the 13th Century. Set near the Citadel, it is also the site of the tomb of a sultan among many other ancient features.
Image by seier+seier on Flickr under Creative Commons License.
3

Al-Uthmaniyah Madrasa is a madrasah complex was established by Ottoman Pasha Al-Duraki in 1730 and was originally named Madrasa Ridaiya. The madrasa, which includes a mosque, boasts one of the tallest minarets in Aleppo, built in the traditional Ottoman pencil-shaped style. It is centered on a large courtyard with small garden plots. Two iwans and a prayer hall covered with domes grace the northern and southern sides of the courtyard. This madrasa was an active institution for religious studies in the eighteenth century with the forty-two cells that line the eastern and western sides of the large courtyard. The northern part of the madrasa was demolished in to the mid-twentieth century during the construction of the east-west axis, Shari al-Sijn.
Image by romana klee on Flickr under Creative Commons License.
Sight description based on wikipedia
4

Al-Halawiyah Madrasa is a madrasah complex built in 1124 on the site of Aleppo's Great Byzantine Cathedral of Saint Helena of the 5th century, where, according to tradition, a Roman temple once stood. Saint Helena, mother of Constantine the Great, built a great Byzantine cathedral there. When the Crusaders were pillaging the surrounding countryside, the city's chief judge started to convert the cathedral into a mosque in 1123 during the reign of Balak Ibn Bahram Ibn Ourtoq. In 1149, Nur al-Din converted the building into a madrasah; an Islamic-religious school for the followers of the Hanafi madhab. Parts of the 5th century Christian construction were turned into an Islamic school. The building encompasses a small courtyard and the original chapel with its eight large corinthian columns. These columns resemble the ones at the Saint Simeon Cathedral near Aleppo. The symmetry of the space allowed a relatively easy transformation from chapel to masjid. It is also known for its fine mihrab.
Image by Outwards on Wikimedia under Creative Commons License.
Sight description based on wikipedia
5

The Clock Tower is one of Aleppo’s most prominent landmarks. It was built in 1898-1899 by the Austrian architect of Aleppo city Charles Chartier with the help of the Syrian engineer Bakr Sidqi, under Ottoman ruler of Aleppo; wāli Raif Pasha. Set close to the Old Town, near the historical gate of Bab al-Faraj, this tower is an amazing example of the Ottoman-Baroque style of the 19th and 20th centuries. The design of the tower resembles the old Islamic minarets with four similar facades, topped with traditional oriental muqarnas. This kind of edifice is characteristic for many cities of the Ottoman Empire.
Image by Preacher lad on Wikimedia under Creative Commons License.
Sight description based on wikipedia
6

Aside from the many ancient sights, Aleppo has more modern landmarks as well. Set on the charming Al Assad Square in the center of the city, you’ll find an impressive bronze statue. It is known as the Memorial Monument to the Martyr Bassel Al Assad. Ten tons of bronze were used to make this great monument by famous contemporary Syrian master Abdul Rahman Mowakket.
Image by Krokodyl on Wikimedia under Creative Commons License.
7

The Al Baladi Palace is the city’s municipal palace. The first thing you are sure to notice about this complex is the Baladiyah tower, which is the highest point in Aleppo. Opposite the palace you can find a small park with a beautiful fountain.
Image by Horia Varlan on Flickr under Creative Commons License.
8

Covering 17 hectares, the urban public park of Aleppo is the largest park in all of Syria. With its hexagonal shape the park is located in Gare de Baghdad district covering an area between Jamiliyeh and Aziziyeh districts. Open since the 1940s, it has provided a great service to the people of the city for decades. This beautiful green space has the Queig river running through it, and wonderfully illuminated at night fountains. The park is home to many art works of famous Syrian sculptors. There are also many playgrounds and statues dotting the park. The statue of emir Sayf al-Dawla is located at the main entrance while the statue of poet Khalil al-Hindawi is located near the central fountains. In October 2006, new dancing water fountains were installed at the centre of the park. Having finished enjoying this peaceful place, you might as well enjoy a good meal at the park’s restaurant in the shade of the trees.
Image by arnemosselman on Flickr under Creative Commons License.
Sight description based on wikipedia

Create Your Own Walk in Aleppo

Creating your own self-guided walk in Aleppo is easy and fun. Choose the city attractions that you want to see and a walk route map will be created just for you. You can even set your hotel as the start point of the walk.

The beautiful city of Aleppo in northern Syria is home to a number of great religious sights. While as you may expect, the majority of local population is Muslim, the city is also home to one of the wealthiest Christian communities in the East. As a result, there are many impressive churches as well as grand mosques to see in Aleppo on this tour.