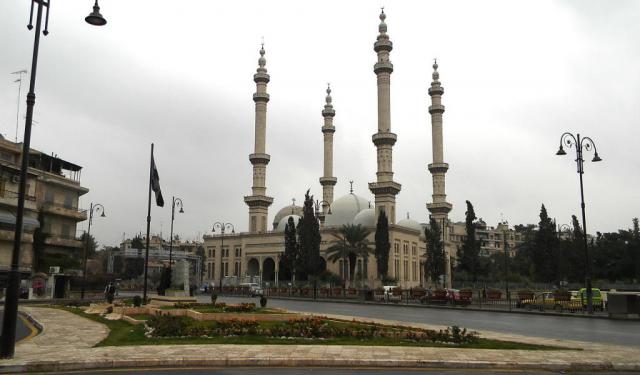 The beautiful city of Aleppo in northern Syria is home to a number of great religious sights. While as you may expect, the majority of local population is Muslim, the city is also home to one of the wealthiest Christian communities in the East. As a result, there are many impressive churches as well as grand mosques to see in Aleppo on this tour.
Image Courtesy of Wikimedia and Spetsnaz1945.
How it works: Download the app "GPSmyCity: Walks in 1K+ Cities" from iTunes App Store or Google Play to your mobile phone or tablet. The app turns your mobile device into a personal tour guide and its built-in GPS navigation functions guide you from one tour stop to next. The app works offline, so no data plan is needed when traveling abroad.

Tawhid Mosque is a contemporary mosque located on Khalil al-Hindawi street, on the right bank of the Queiq River. It was opened in 1981 and features a combined style of the early Islamic Abassid architecture and modern mosques. Situated in a largely Christian-populated quarter of Aleppo, the Tawhid Mosque is nestled among a number of churches. This fact tells you a lot about the high level of religious tolerance in Syria. At this elegant and splendid mosque, you will notice a large central dome surrounded with 4 smaller silver domes, slender minarets and beautiful decorations.
Image Courtesy of Wikimedia and Outwards.
Sight description based on Wikipedia.
2

St. George's is a Greek Catholic Cathedral of Aleppo. Like many other churches in the city, it is set around a small square. The building has a large dome flanked by two smaller domes. St. George's Cathedral is especially beautiful at night, when it is wonderfully illuminated.
Image Courtesy of Wikimedia and Preacher lad.
3

3) Church of the Holy Cross

This Armenian Catholic church serves some of the many Armenians in Syria. Many of these people were refugees from conflict in their home country. The consecration of the church took place on 24 April 1993. It is the work of the Aleppine-Armenian architect Sarkis Balmanougian. As of April 2010, Father Nerses Zabbarian is the parish priest of Holy Cross church.
Image Courtesy of Flickr and andycoan.
Sight description based on Wikipedia.
4

While Aleppo has a variety of different churches, this Latin church is perhaps the most distinctive. It boasts extensive decorations and two high towers. The church’s French style architecture and its beautiful interior make it well worth seeing during your visit to the city.
Image Courtesy of Flickr and Danny David.
5

The Saint Elias Cathedral is an Eastern Catholic church located in the Christian quarter of Jdeydeh. It is named after Elijah the prophet. The church was opened in 1873 and renovated in 1914. The building has two magnificent belfries at the facade, In 1914, during the period of Archbishop Michael Akhras, the dome was renovated and for that purpose, concrete was used in reconstruction works for the first time in the architecture history of Aleppo, with the help of experts from Belgium. In the same period, the chiming clock, which plays Ave Maria every fifteen minutes, has been placed on the tower, while its marble entrance with yellow columns is situated under the high dome on the east side. In front of the main gate, the statue of Archbishop and poet Germanos Farhat (1670–1732) has been erected in 1932 to commemorate the 200th anniversary of his death, and for his efforts in founding the Maronite library, the home of old valuable manuscripts. Since then, the surrounding area of the cathedral is called Farhat square.
Image Courtesy of Wikimedia and Marti McFly.
Sight description based on Wikipedia.
6

The Forty Martyrs Armenian Cathedral of Aleppo is a 15th century Armenian Apostolic church. It is significant among Armenian churches for having three altars. The church has no dome, but the bell tower is considered to be one of the unique samples of the baroque architecture in Aleppo. It is significant for being one of the oldest functioning churches in the Armenian diaspora.

The Armenian church of the Forty Martyrs in Aleppo was mentioned for the first time in 1476, in the second edition of the book The Exploit of the Holy Bible, written by Father Melikseth in Aleppo. It was erected to replace a small chapel in the old Christian cemetery. The church was named in the honour of a group of Roman soldiers who faced martyrdom near the city of Sebastia in Lesser Armenia, and were all venerated in Christianity as the Forty Martyrs of Sebaste. On 26 April 2000, the Armenian community of Aleppo marked the 500th anniversary of the first enlargement of the church under the patronage of His Holiness Aram I Catholicos, during the period of Archbishop Souren Kataroyan.

The Mulla Khan Mosque is a beautiful Ottoman era mosque with a splendid interior. There is a calm, pleasant space near the fountain of the mosque where you can stand and contemplate the amazing architecture of this house of worship.
Image Courtesy of Wikimedia and Váradi Zsolt.
8

The Great Mosque of Aleppo is the largest and oldest mosque in the city of Aleppo. The present mosque dates form the 13th century Mamluk period. It is located in its Old City and is said to entomb the remains of Zechariah, father of John the Baptist. It was built in the beginning of the 8th century. However, the current building dates back to the 11th through 14th centuries. The minaret was built in 1090, and was destroyed during fighting in the Syrian civil war in April 2013. The site of the Great Mosque once was the former Agora from the Hellenistic period, which later became the garden for the Cathedral of Saint Helena, during the Christian era rule of Syria.

The mosque, begun about 715, was built on confiscated land that was the Cathedral cemetery. In 1260, the entire mosque was razed by the Mongols. The Great Mosque is built around a vast courtyard that connects to different areas of the mosque, positioned behind the colonnaded arcade. The courtyard is well-known for its black and white stone pavement that forms complex geometric patterns. The main prayer hall of the mosque holds the primary elements of the mosque: the shrine of Zechariah, a 15th century minbar, and an elaborately carved mihrab.

Image Courtesy of Wikimedia and Heretiq.
Sight description based on Wikipedia.

Create Your Own Walk in Aleppo

Creating your own self-guided walk in Aleppo is easy and fun. Choose the city attractions that you want to see and a walk route map will be created just for you. You can even set your hotel as the start point of the walk.

There are plenty of amazing landmarks in this beautiful city of Northern Syria. While you may not know it, Aleppo is one of the oldest cities on Earth. Take this orientation walk to see the most popular attractions in Aleppo.