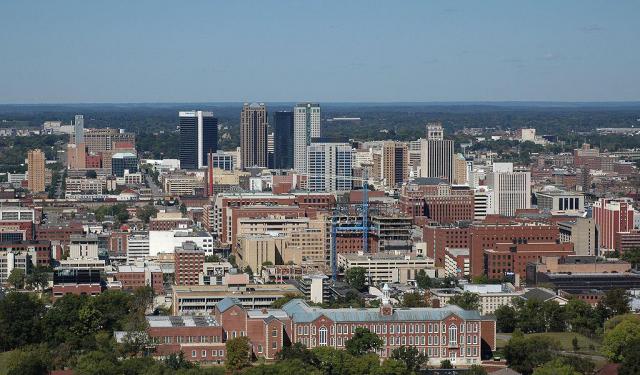 Birmingham is Alabama's biggest city and dates back to 1871, making it a Reconstruction-era city. Although initially formed from agricultural communities, the city quickly became a central railroad and industrial hub, with the iron and steel industries accounting for much of the local workforce.

Irish and Italian immigrants, as well as African Americans, made up most of this early workforce. During the early 20th century, Birmingham was often compared to Pittsburgh because of the amount of steel production. The Civil Rights Movement opened up a wealth of new opportunities for the Black community in Birmingham. Today, education, telecommunications, insurance, and banking are some of the largest industries in the city.

The museums you'll want to put on your list include The Birmingham Museum of Art and The Negro Southern League Museum. Stop by the Alabama Theatre for a bit of 1930s nostalgia or Railroad Park to savor one of the city's most extensive green spaces.

Take this self-guided walking tour to explore some of Birmingham's most popular sights.
Image Courtesy of Eric in SF.
How it works: Download the app "GPSmyCity: Walks in 1K+ Cities" from iTunes App Store or Google Play to your mobile phone or tablet. The app turns your mobile device into a personal tour guide and its built-in GPS navigation functions guide you from one tour stop to next. The app works offline, so no data plan is needed when traveling abroad.

Kelly Ingram Park is a public park in Birmingham, Alabama. One of the location's claims to fame is its popularity as a gathering place for civil rights groups during the Civil Rights Movement. The Southern Christian Leadership Conference was one of the most well-known groups to meet in this park.

This park is part of the Civil Rights Trail and is famous for its sculptures that commemorate the struggle for civil rights. Commemorative statues of important figures that include Dr. Martin Luther King are here. Another sculpture depicts A.D. King, John James Porter, and Nelson H. Smith at prayer. Another noteworthy sculpture depicts the four girls killed in the 1963 church bombing.

Visitors can take advantage of an audio tour to learn more about this site. Family festivals, entertainment events, and cultural events are regularly offered here. The park is full of fascinating history and has a lot to offer for all ages.

Many of the exhibits provide an in-depth look at life during the Civil Rights era, such as what a segregated city would have looked like during the 1950s. There is a replica of the bus that the Freedom Riders rode. You can also see the door from the jail cell that Martin Luther King occupied when he penned his famous letter.

One of the things that the museum has done is provide an archive of about 500 oral histories relating to this time in history. Hearing these first-hand accounts helps give a more personal perspective on these events. There is also an impressive archive of documents that you can access.

There are traveling exhibitions that you may have the opportunity to see while you're here. The Selma-to-Montgomery marches are popular exhibit subjects, as well as the Freedom Rides. There have also been exhibits related to the bombing at the 16th Street Baptist Church. There is an exhibit about the book Elder Grace as well.

In addition to these exhibits, you can also see collections relating to lesser-known subjects, like Deep South lesbian families. All of these exhibits tell the story of the Civil Rights Movement using many important voices. You'll gain an even greater appreciation for the sacrifices made during this time because of the exhibits.

The 16th Street Baptist Church is the site of the 1963 bombing that killed four young girls and injured 20 other members. Founded in 1873, the church was a significant site for members of the Civil Rights Movement. When the church reopened in 1964 following the bombing, one of the new features was a stained glass window with a Black crucified Christ.

The current building, completed in 1911, has a blend of Byzantine and Roman elements. One of the architectural highlights is a copula over the nave area, which is accessed using a wide staircase. This building also features two towers, complete with painted domes.

Visitors who tour this church will be impressed with how beautifully the building's history has been preserved. The brick exterior and the windows that let in a maximum amount of light help add to its beauty. When you tour the inside, you will appreciate this building's importance as a worship space.

The original hardwood used in the main sanctuary area is still present, accompanied by red carpeting and colorful stained glass windows. An auditorium at the basement level is ideal for events, and also has several adjacent rooms. Visitors touring the building can easily access both of these areas to learn more about church life.

See one of the most critical sites in Civil Rights and local Birmingham history.
Image Courtesy of Wikimedia and John Morse.
4

4) Birmingham Museum of Art (must see)

The Birmingham Museum of Art, a vital part of the city's cultural scene since 1951, has a collection of over 24,000 works of art. These collections range from paintings, prints, and drawings to decorative art and sculpture. The diverse range of cultures represented in addition to American and European groups includes pre-Columbian and Native American, African and Asian groups.

One of the things that stands out the most vividly about the museum is its collection of Vietnamese ceramics, regarded as one of the best in the Southeastern United States. The museum boasts a large Baroque and Renaissance collection, with decorative arts, paintings, and sculptures ranging from the 13th to mid-18th centuries. French furniture and English ceramics from the 18th century are also essential parts of the collection in this museum.

You can also enjoy an outdoor sculpture garden during your visit. Some of the highlights include a water wall, decorative pavers, and tile pools. The garden features multiple levels to maximize the effect of the sculptures.

5) Cathedral Church of the Advent

The Cathedral Church of the Advent is the seat of the Episcopal Diocese of Alabama. This historic church, with its prominent location, has been on the National Register of Historic Places since 1983. The present building has stood since 1893 and retains the ornate sandstone exterior that makes the church stand out in its downtown location.

One of the highlights is the Rector's Garden, which also contains a columbarium where members can have cremains inurned. Visitors touring the garden have access to benches that give them a place to relax. The bell tower has a carillion with fifteen bells capable of playing a broad range of hymn tunes. Visitors may have the chance to hear musical performances.

The cathedral's interior features a traditional setting with hardwood pews, stained glass windows, and carvings. An exciting highlight is the original pulpit, which features images of the Apostles and the sounding board suspended above the pulpit, used to amplify volume during sermons before modern-day sound systems.
Image Courtesy of Wikimedia and Curtis Palmer.
6

The Cathedral of St. Paul in Birmingham is the seat of Birmingham's Catholic diocese. This building dates back to 1893 and became officially recognized as a cathedral in 1969. One of the church's most well-known clergy members was Fr. James Coyle, a priest murdered in 1921. The church made the National Historic Register listing in 1982.

All of the windows have special significance, morning the patron St. Paul and the Holy Family. There is a dome over the main sanctuary area that features a window with an image of a dove. The dove symbolizes the Holy Spirit.
Image Courtesy of Wikimedia and Chris Pruitt.
7

The Alabama Theatre is a favorite performance venue in Birmingham's Downtown area. This theater has been wowing audiences since 1927 and retains its classic design. The range of entertainment that audiences have enjoyed here is expansive, ranging from beauty pageants to concerts and movies. The Mickey Mouse Club has even been filmed here.

In 1998, the theater saw a restoration to the original beauty of the 1920s. The gold leaf paint, carpeting, and drapes have seen a facelift that will keep the theater enjoyable for modern audiences. This theater has a Wurlitzer Opus 1783 organ that has 20 ranks of pipes and the capacity for sound effects that would have been required for silent movies.

Because the theater is a working venue, visitors cannot do tours on-demand inside. The guided tours, scheduled in advance, include highlights of the theater's history and architecture, as well as a performance featuring the organ. Even if you don't tour the inside, you'll enjoy seeing the architecture representative of the 1920s movie palace era.
Image Courtesy of Wikimedia and DXR.
8

The Negro Southern League Museum commemorates the baseball league that lasted from 1920 to 1951. This league served as a pathway for some of baseball's greats to start playing professionally. When you spend some time here, you'll learn more about the rise of professional baseball and the various trials that these early players faced.

Memorabilia from some of the league's greatest stars is one of the best experiences. These collections are set up in a way that draws the attention of all ages. Uniforms from players such as Satchel Paige, Bullet Joe Rogan, and Willie Wells are here for you to enjoy.

There are 1,500 signed baseballs on display. You'll also be able to see displays related to Bo Jackson and the original Rickwood Field. Other highlights from the league include the McCallister Trophy, a player's contract from the Cuban Stars dating to 1907, and a Satchel Paige hologram.
Image Courtesy of Flickr and David.
9

Railroad Park is one of Birmingham's largest green spaces, occupying a total of 19 acres. This park commemorates the city's artistic and industrial heritage, ensuring that there is something for everyone. The setting is perfect for kicking back and relaxing, with an impressive array of activities going on at any time.

One of the things that have a broad appeal for visitors is the number of trees that include flowering, evergreen, and hardwood trees. The seating areas and walkways have been made from repurposed bricks that use the original cobblestone. Some of the highlights include a lake and wetland area.

The park has a series of walking paths, as well as a trail spanning the entire length of the space. This trail measures 3/4 mi. long and the highest point has some of the best views of the city. You'll enjoy the opportunity that this park offers for you to enjoy nature.
Image Courtesy of Flickr and Tony Webster.

Birmingham, Alabama is the very first destination that comes to mind at the mention of the Civil Rights Movement in the United States. Back in the 1950s and 1960s, this city saw a great deal of bloodshed and strife between civil rights leaders, seeking to shed the stigma of centuries-long injustice, and their opponents.

The area of downtown Birmingham, where several significant events in the...  view more