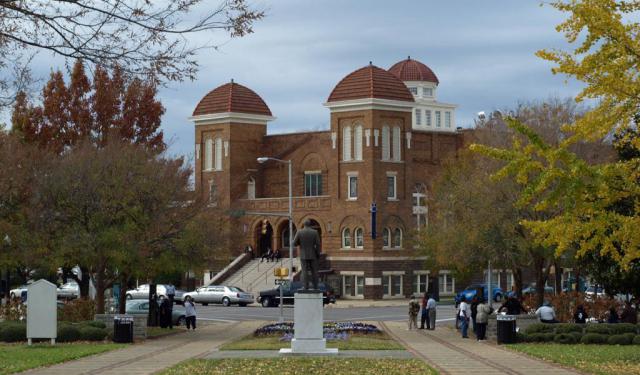 Birmingham, Alabama is the very first destination that comes to mind at the mention of the Civil Rights Movement in the United States. Back in the 1950s and 1960s, this city saw a great deal of bloodshed and strife between civil rights leaders, seeking to shed the stigma of centuries-long injustice, and their opponents.

The area of downtown Birmingham, where several significant events in the Civil Rights Movement took place, became a designated district in 1992. Today it comprises several memorials and one of the country’s premier civil rights museums, namely:

Birmingham Civil Rights Institute – a modern museum providing an interactive overview of the history of Birmingham's role in the Civil Rights Movement; among the exhibits here are a Freedom Rider bus and the actual door from the jail where Dr. Martin Luther King Jr. wrote his "Letter From A Birmingham Jail."

Visiting these and other locations offers a chance to reflect on the violence that occurred in the city in the middle of the past century, as well as to remember and mourn those who lost their lives. If you are interested to learn more about this important era of American history, take this self-guided tour for a sobering and reflective experience.
Image Courtesy of Wikimedia and Chris Pruitt.
How it works: Download the app "GPSmyCity: Walks in 1K+ Cities" from iTunes App Store or Google Play to your mobile phone or tablet. The app turns your mobile device into a personal tour guide and its built-in GPS navigation functions guide you from one tour stop to next. The app works offline, so no data plan is needed when traveling abroad.

Many of the exhibits provide an in-depth look at life during the Civil Rights era, such as what a segregated city would have looked like during the 1950s. There is a replica of the bus that the Freedom Riders rode. You can also see the door from the jail cell that Martin Luther King occupied when he penned his famous letter.

One of the things that the museum has done is provide an archive of about 500 oral histories relating to this time in history. Hearing these first-hand accounts helps give a more personal perspective on these events. There is also an impressive archive of documents that you can access.

There are traveling exhibitions that you may have the opportunity to see while you're here. The Selma-to-Montgomery marches are popular exhibit subjects, as well as the Freedom Rides. There have also been exhibits related to the bombing at the 16th Street Baptist Church. There is an exhibit about the book Elder Grace as well.

In addition to these exhibits, you can also see collections relating to lesser-known subjects, like Deep South lesbian families. All of these exhibits tell the story of the Civil Rights Movement using many important voices. You'll gain an even greater appreciation for the sacrifices made during this time because of the exhibits.

The 16th Street Baptist Church is the site of the 1963 bombing that killed four young girls and injured 20 other members. Founded in 1873, the church was a significant site for members of the Civil Rights Movement. When the church reopened in 1964 following the bombing, one of the new features was a stained glass window with a Black crucified Christ.

The current building, completed in 1911, has a blend of Byzantine and Roman elements. One of the architectural highlights is a copula over the nave area, which is accessed using a wide staircase. This building also features two towers, complete with painted domes.

Visitors who tour this church will be impressed with how beautifully the building's history has been preserved. The brick exterior and the windows that let in a maximum amount of light help add to its beauty. When you tour the inside, you will appreciate this building's importance as a worship space.

The original hardwood used in the main sanctuary area is still present, accompanied by red carpeting and colorful stained glass windows. An auditorium at the basement level is ideal for events, and also has several adjacent rooms. Visitors touring the building can easily access both of these areas to learn more about church life.

See one of the most critical sites in Civil Rights and local Birmingham history.
Image Courtesy of Wikimedia and John Morse.
3

Kelly Ingram Park is a public park in Birmingham, Alabama. One of the location's claims to fame is its popularity as a gathering place for civil rights groups during the Civil Rights Movement. The Southern Christian Leadership Conference was one of the most well-known groups to meet in this park.

This park is part of the Civil Rights Trail and is famous for its sculptures that commemorate the struggle for civil rights. Commemorative statues of important figures that include Dr. Martin Luther King are here. Another sculpture depicts A.D. King, John James Porter, and Nelson H. Smith at prayer. Another noteworthy sculpture depicts the four girls killed in the 1963 church bombing.

Visitors can take advantage of an audio tour to learn more about this site. Family festivals, entertainment events, and cultural events are regularly offered here. The park is full of fascinating history and has a lot to offer for all ages.
Image Courtesy of Flickr and Ron Cogswell.
4

The A. G. Gaston Motel is a significant landmark for the Civil Rights Movement, having been a meeting place for leaders in 1963. This motel has a mid-century design and a courtyard that was beautifully maintained in its day. Today, this property is owned by the National Park Service and the City of Birmingham, and it is part of the Birmingham Civil Rights National Monument.

Although it has been decades since the motel was in regular use, visitors can appreciate the significance as an iconic Civil Rights Movement landmark. The motel was one of the luxury properties open to Black Americans during the segregation era and once boasted excellent facilities for dining and entertainment.

Visitors will be able to appreciate the efforts that went into desegregation after visiting this site. Seeing the areas where such important figures met is a crucial part of understanding the story of civil rights. Easy access to other sites that make up the Birmingham Civil Rights National Monument makes the motel site worthy of your time.
Image Courtesy of Wikimedia and Neil T.
5

The Carver Theatre in Birmingham dates to 1935 and was the first movie theater to allow members of the Black community to see first-run movies. This theater seats 527 guests and serves as a live performance venue today. The Alabama Jazz Hall of Fame is also located in this building.

This theater retains much of its original character, with most of the same elements from the 1930s present. Visitors will enjoy the original exterior, which hearkens back to the era of movie palaces. Renovations made to the interior have helped restore the theater to its former beauty.

Jazz festivals, including festivals featuring music students, are a regular part of the entertainment here. Visitors can also take advantage of educational presentations and workshops about Birmingham's musical history. Visiting this theater will be an educational as well as entertaining experience.
Image Courtesy of Flickr and David Brossard.
6

The Alabama Penny Savings Bank is one of Birmingham's oldest bank buildings. This building is also known as the Pythian Temple and dates to 1913. The building spans six stories and uses the popular Commercial style of the era when it was constructed, nicely blending in with the other buildings of the Fourth Avenue Historic District.

The bank was Alabama's first Black-owned bank, playing a role in funding Black-owned homes and churches. This building's design has been attributed to Wallace A. Rayfield, one of Birmingham's more important architects who designed many Black-owned buildings in the city.

This bank building has appeared on the National Register of Historic Places since 1980. A projecting cornice, four vertical piers, and the brick exterior help make the building stand out. As an office building constructed during the 2010s, the Alabama Penny Savings Bank building stands out as a stunning example of the era's designs.
Image Courtesy of Wikimedia and Chris Pruitt.

Birmingham is Alabama's biggest city and dates back to 1871, making it a Reconstruction-era city. Although initially formed from agricultural communities, the city quickly became a central railroad and industrial hub, with the iron and steel industries accounting for much of the local workforce.

Irish and Italian immigrants, as well as African Americans, made up most of this early...  view more