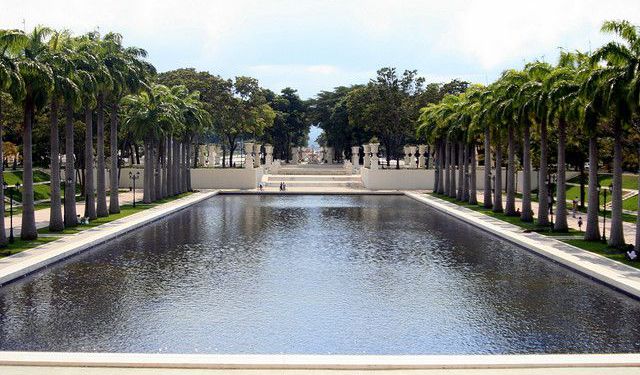 Image by Carlos Adampol on Flickr under Creative Commons License.

Apart from being a commercial and cultural center of Venezuela, the capital city Caracas is known internationally as the final resting place of South American liberator Simón Bolívar, who's buried here at the National Pantheon. This and other notable attractions of Caracas, such as the Caracas Cathedral, Palacio de Miraflores and more, make up this city orientation walk.
How it works: Download the app "GPSmyCity: Walks in 1K+ Cities" from iTunes App Store or Google Play to your mobile phone or tablet. The app turns your mobile device into a personal tour guide and its built-in GPS navigation functions guide you from one tour stop to next. The app works offline, so no data plan is needed when traveling abroad.

Starting the 17th century, Nue Casa Amarilla was the royal prison. Only after Venezuelan independence did it become the residence of the President. At that time, it was painted yellow, which is why it is known as "The Yellow House." Here you can take a guided tour individually or with a group.
Image by Guillermo Ramos Flamerich on Wikimedia under Creative Commons License.
2

Image by Erik Cleves Kristensen on Flickr under Creative Commons License.
Sight description based on wikipedia
3

Museo Sacro de Caracas was built in 1884 as a church and was transformed into a museum in 1992, housing religious objects and artifacts. The museum is located on a former cemetery, and visitors have access to some of the graves and sealed tombs. The museum has permanent and seasonal exhibitions, which showcase ornate carvings, paintings and objects of worship.
Image by arepa182 on Flickr under Creative Commons License.
4

Casa Natal de El Libertador is the birthplace of Simon Bolivar. Here you will find the history of his immediate family and successive generations of Bolivars. The interior design, furniture, and paintings remain as they were in Bolivar's time. Visit this house to appreciate the historic structure and learn about one of Caracas's most famous residents.
Image by Jesús Rincón on Wikimedia under Creative Commons License.
5

Iglesia de San Francisco is one of the most visited churches in the downtown area of Caracas. It is a Catholic church built in 1593. Because of an earthquake, it has suffered some architectural damage, but retains its same original style. In 1956, it was named a National Monument. Visit this Neo-Baroque style church and learn more about its important role in the cultural history of Caracas.
Image by Guillermo Ramos Flamerich on Wikimedia under Creative Commons License.
6

Palacio de Las Academias is one of the oldest buildings in the city and resembles a palace. It was initially used as a government building, but today it serves as an educational center, hosting several educational academies. Take your time exploring the historic halls and rooms of the building.
Image by Carlos Tonos on Wikimedia under Creative Commons License.
7

Arco de la Federación, a large white arc, is a monument inaugurated in 1895. The arc statues depict important scenes and symbols of the war and resulting peace that occurred throughout 1859-1863. It stands as a witness to the hardships of war and as a symbol for freedom in a prominent position on a green, forested hill. Make sure this landmark is the one you do not skip, considering its beauty and importance to the country.
Image by christian.vielma on Flickr under Creative Commons License.
8

The Palacio de Miraflores (Spanish for "Miraflores Palace") is the official workplace of the President of Venezuela. It is located on Urdaneta Avenue, Libertador Municipality in Caracas. It was started on 27 April 1884 under the direction of Giuseppe Orsi and was intended as the family residence of Joaquin Crespo. In 1911, the national administration acquired the property from General Félix Galavis at a cost of five hundred thousand bolívares, and Miraflores Palace became the official presidential residence and office.

After many modifications, the current palace presents fountains encompassed by corridors and halls, such as the Peruvian Sun Hall; the Joaquín Crespo Hall; Vargas Swamp; the Ambassador Hall and Ayacucho Hall. Originallly, Miraflores Palace served as presidential residence to Cipriano Castro, and then Juan Vicente Gómez, who occupied it until 1913. From 1914 to 1922, it functioned as office to the provisional administration of Victorino Márquez Bustillos. In 1923, Miraflores witnessed the murder of Vice-president Juan Crisóstomo Gómez, brother of President Juan Vicente Gómez. From 1931 to 1935, the palace was inhabited, guarded by the army. During the governments of Eleazar López Contreras and Isaías Medina Angarita, the presidential office is modified. In 1945, Rómulo Betancourt became the first president who identifies the seat of government as Miraflores Palace, replacing the name of Federal Palace.

Image by manuelhborbolla on Flickr under Creative Commons License.
Sight description based on wikipedia
9

Basílica de la Santa Capilla is a copy of a church in France and is one of the old churches in the city. The church was declared a National Monument in 1883 and is frequently visited by tourists hoping to see its famed interior. Revel in its fine glass windows and its traditional Catholic style.
Image by caracasapie on Flickr under Creative Commons License.
10

Iglesia de Nuestra Señora de las Mercedes is one of the important religious buildings in the city. It’s a very old Catholic church that dates back to 1614 and combines Baroque style with Solomonic columns and foliated volutes. The church has been refurbished multiple times since it was first built roughly four centuries ago. In 1960, it was officially declared a National Historic Monument. Be sure to visit this religious masterpiece!
Image by Guillermo Ramos Flamerich on Wikimedia under Creative Commons License.
11

Construction on the Foro Libertador started in 1981. It was built in segments and was completed in 1997. The building has two sections, one for festivals and the other for cultural events. It is surrounded by exotic trees, bushes and flowers, which enhance its beauty. It is a great place to spend time as a family.
Image by Banco de imagenes TURIDEE on Flickr under Creative Commons License.
12