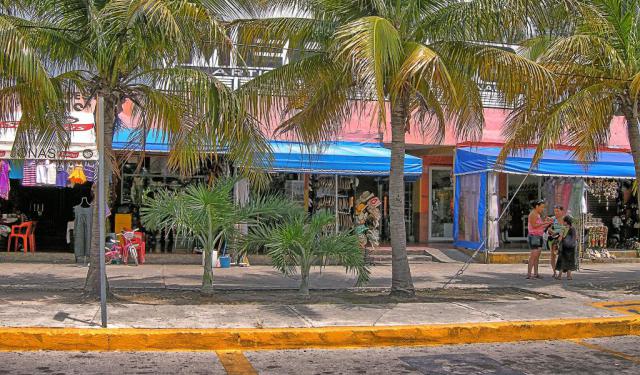 Cancun, Mexico initially enjoyed status as part of the Mayan Empire before the Spanish conquest of the 16th century. In the years leading up to Cancun's founding in 1970, most of the land has been part of a coconut plantation. Nine hotels opened in Cancun in the 1970s, launching the start of the modern tourist industry that fuels most of the activity in this area.

Downtown Cancun is a vibrant hub of shops and restaurants and where tradition and modernity go hand in hand. The main boulevard in the area is Tulum Avenue, which is very easy to recognize owing to the large sculpture of shells and shellfish in the middle of a traffic circle. It is known as "El Ceviche" and at night the feature is a particularly dramatic sight when illuminated. The avenue is filled with restaurants, cinemas, handcraft markets, shops, department stores and malls.

There's more great shopping to be had at Market 28, the city's largest and most popular open-air market where streets are lined with many shops and stalls. Come here for handmade Mexican crafts, souvenirs, silver jewelry and lots more. Attached to Mercado 28 is a small outdoor plaza known as Plaza Bonita which looks like a small Mexican village. Browse its specialty shops for Mexican handicrafts.

Go for a relaxing stroll in Las Palapas Park, the main park in Downtown Cancun where many residents love to meet and socialize. For an exciting and eclectic nightlife, Downtown Cancun is hard to beat. The choice of restaurants and bars is extensive, particularly along Yaxchilan Avenue, the so-called avenue that "never sleeps".

Take this self-guided Downtown Cancun walking tour to get the most from your trip.
Image Courtesy of Flickr and Kirt Edblom.
How it works: Download the app "GPSmyCity: Walks in 1K+ Cities" from iTunes App Store or Google Play to your mobile phone or tablet. The app turns your mobile device into a personal tour guide and its built-in GPS navigation functions guide you from one tour stop to next. The app works offline, so no data plan is needed when traveling abroad.

Tulum Avenue is main boulevard in downtown Cancun as well as a popular walking area that leads to some of the most popular shopping and dining options where you can get a feel for Cancun's local life. The fruit stands are excellent places to sample local produce, and you can also find excellent local cuisine at superfood carts. Local shops and street vendors carry all kinds of interesting goods that you will want to consider buying.

Some of the shopping options you might find on the streets off Tulum Avenue include malls like Plaza Las Americas, Shops Cancun, and Puerto Cancun Marina Town Center. Other popular shopping locations include a Hallmark Shop, Skills Grafitti Shop for clothing, and tattoo and smoke shops.

Ki-Huic Market is the oldest craft market open in Cancun. This market's focus on traditional crafts highlights Mexican culture and its influences, including the ancient Mayan civilization. Because of the central location, you will be able to take advantage of all the interaction that takes place with the locals who frequent the market.

There are over 100 vendors present in the market, and visitors are very pleased with their warmth. Jewelry and art are especially popular, representing the cultural influences that inspire so many local crafters. Paintings, mats, and candles are also popular with crafters.

Vendors also sell beach gear, which is perfect if you've forgotten anything you may need for a beach day. You can also find clothes, from souvenir T-shirts to clothing made with colorful, local textiles. Regardless of whether you're in the market for souvenirs, gifts, or practical items, this market has something that you'll love.

Parque del Artesano, also known as Artisan Park, is famous for its unique hippie vibe. On Wednesdays through Sundays, you'll be able to browse the offerings from local vendors, which have a reputation for high quality. Handmade jewelry featuring colorful natural stone is a favorite item for locals and visitors to buy here.

Souvenirs and bargain items are also available if you want to look for them here. There is also a small playground area with swings and a slide if you have kids with you. Several restaurants are nearby if you feel like something quick to eat, and there are no food vendors in the park at the time.

In addition to shopping for crafts, you might have a chance to hear some live music. The park has a stage that attracts bands willing to perform for everyone. This musical entertainment often lasts for hours, giving you the perfect reason to enjoy some time relaxing here.
Image Courtesy of Wikimedia and MsSaraKelly.
4

El Parque de las Palapas is a public park that is also popular as a performance venue. Performers are most popular around dusk hours, and you'll find people of all ages enjoying the entertainment. Electric cars are also available that are particularly popular for visitors who have brought kids.

Stalls selling souvenirs and clothing are of interest to many visitors. The offerings from local vendors range from handcrafts in high demand to bargain items of varying quality. One of the best things about the overall atmosphere is that you will enjoy taking your time looking at everything.

The food stalls selling finger foods are very popular in this park. Chicarones, churros, marquesitas, homemade ice cream, and Mexican corn are some of the most popular foods sold here. Whether you enjoy your snacks while listening to music or munch on them while shopping, you'll be happy with the treats you have chosen.
Image Courtesy of Flickr and Shinya Suzuki.
5

La Habichuela is one of Cancun's most popular restaurants, having served customers for over 39 years. The cuisine is Mexican with Caribbean, Mayan, and international influences. This restaurant is an award-winning location for foodies that gives all of its guests top-quality attention and care.

This restaurant has a colorful, inviting interior. You can dine in the interior dining area or on the outdoor patio area, enjoying a top-notch experience either way. Viewing sights like Mayan-style statuary and large aquariums with colorful fish during your visit that help add to the festive atmosphere.

Fresh seafood, particularly lobster, is a popular menu item. Some of the other popular seafood offerings include ginger shrimp with mushrooms, cocobicheula, and Fish Veracruzana. The restaurant also serves a range of steak, chicken, and pasta dishes, using fresh spices that effectively blend the different influences that are part of the restaurant's cuisine.
Image Courtesy of Flickr and sputnik.
6

Market 28 in downtown Cancun is an ideal place to visit if you are looking for unique and attractive gifts or souvenirs to take home. If you love food, you will find authentic Mexican food at this market apart from a variety of handicrafts, clothing and jewelry stores. Restaurants here also serve a range of traditional dishes.

Visitors enjoy shopping at the supermarket here. There are more than 100 stores in this market frequented by avid tourists. Most shops accept US dollars and a few of them accept credit cards too.

If you love bargaining, this market is a pleasure to shop in. All wares are well organized and offer an attractive collection of artifacts. Catch the early bus and be at the market first thing in the morning, when stores open, to get bargain deals, as most merchants hope to bring in good luck for the day with their first sale.

Enjoy a visit to this market during your trip to Cancun. Spend an exciting time browsing around shops and purchase attractive trinkets, souvenirs and fashion clothes. Relax at any of the restaurants serving delicious Mexican food as you take a break from shopping. Take home memories of Cancun and share you exciting experience with your family and friends.
Image Courtesy of Flickr and David Stanley.
7

Bags and jewelry are among the local handcrafts well-represented in this shopping area. You will also be able to find good deals on items like shoes, toys, and computers. If you are in the market for gift or souvenir items, you will have excellent chances of finding something here.

If you want something to eat while you're here, there are plenty of options that you will want to consider. Most of the restaurants and cafes in this shopping center serve traditional Mexican foods. You can easily get either full meals or quick snacks, whichever works the best for you.

Create Your Own Walk in Cancun

Creating your own self-guided walk in Cancun is easy and fun. Choose the city attractions that you want to see and a walk route map will be created just for you. You can even set your hotel as the start point of the walk.

Cancun is more than just hotels and resorts, as the main tourist area also offers the chance of viewing several cultural and historical points of interest. Visitors may get acquainted with Maya civilization through the ruins of Yamil Lu'um (“hilly land”), located on Cancun’s highest point, or buy local souvenirs at the Mercado Coral Negro.

The area also has a number of modern,...  view more

Part of the Yucatán Peninsula, Cancun is a major tourist spot on the face of Mexico, drawing annually millions of tourists. Yucatan is a home to some of the Mexican delights, such as Xtabentún Liqueur, which makes it a true magnet for visitors looking to pick up something memorable and...