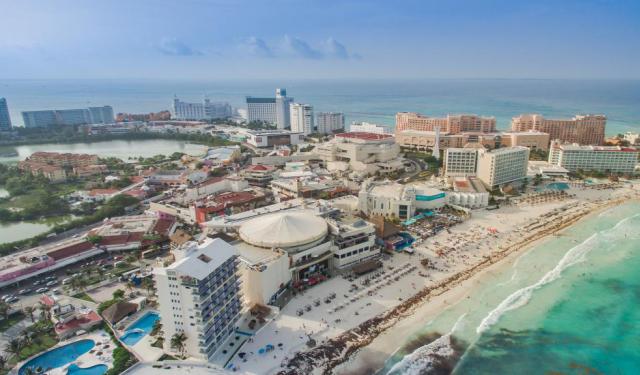 Image by dronepicr on Flickr under Creative Commons License.

Cancun is more than just hotels and resorts. The tourist area also offers the chance of viewing several cultural and historical attractions of interest. Visitors may get acquainted with Maya civilization through the Museo del INAH and Yamil Lu'um, or buy local souvenirs at the Mercado Coral Negro. Last but not least, you could even swim with the dolphins.
How it works: Download the app "GPSmyCity: Walks in 1K+ Cities" from iTunes App Store or Google Play to your mobile phone or tablet. The app turns your mobile device into a personal tour guide and its built-in GPS navigation functions guide you from one tour stop to next. The app works offline, so no data plan is needed when traveling abroad.

Kukulcan Boulevard is the street in Cancun, best known for being the home of some of the most popular all-inclusive resorts. This street and the places immediately surrounding it are known as The Hotel Zone because of the collection of hotels and resorts. One of the things that visitors enjoy about walking along this area is the safety level.

High-end shopping is a popular activity on this street. Hats and T-shirts that are ideal for your trip to the beach are also popular items to buy here. One of the highlights on this street is an aquarium, where you can easily watch some fascinating fish species.

If you get hungry while you're in the area, the street is host to many restaurants. The cuisine selections here include local favorites and international foods as well. Whether you're looking for an upscale or a casual option, you will have plenty of excellent choices.

Image by MARELBU on Wikimedia under Creative Commons License.
2

Kukulcan Plaza is one of Cancun's most popular shopping areas, found in the city's Hotel Zone. The mall, open since 1992, has an impressive architecture that makes it easily stand out. One of the most noteworthy features is a Mayan-style stained glass window in the ceiling, which lets in light in a most attractive way

Popular handicrafts, antiques, and jewelry sellers include Mexican Party, The Route of the Indies, and Scorpion Jewelry. Clothing stores with beach gear that might need include Zangara and Bari. Other popular retailers include Forever 21, Harley Davidson, and Oakley. This mall also has a bank and pharmacy for your convenience.

Shepherdess, Mr. Pampa's, and Ketchup are popular local restaurants to consider. Ruth's Chris offers a steakhouse experience worth your time, and there is also a Haagen Dazs location for ice cream. If you're interested in picking up some food to prepare later, stop by the Soriana supermarket.

Image by holachetumal on Wikimedia under Creative Commons License.
3

Located between the Park Royal Piramides and Westin Laguna Mar, Yamil Lu’umon is an archaeological site and a popular tourist attraction in Cancun. Ruins of two small temples can be found at this site. These temples were constructed between 1200 and 1550 AD and the ruins are maintained by Park Royal Piramides.

One of the temples has a scorpion sculpture on its wall and is therefore called the Temple of Scorpion or Templo Del Alacran. There is a handprint in the stucco of the other temple which is called Temple of the Handprint or Templo de la Huella. The scorpion and the handprint are not visible now.

These ruins are located at the highest point of the city above the beach. The fact that these temples were built at such high altitudes indicate that they were used as light houses, watch towers and navigational aids.

First discovered by American explorer and diplomat John Lloyd Stephens in 1842, Yamil Lu’um is today open to visitors. This is the smallest of the Cancun ruins that can be accessed by walking through to the site from the Park Royal Piramides or the Westin.
Image by Mauro I. Barea G. on Wikimedia under Creative Commons License.
4

La Isla Shopping Village is one of Cancun's top shopping areas, with an abundance of stores and restaurants. There are artisanal gifts to buy, made by local crafters, and you even have the chance to sample tequila made locally. Some of the features that set this open-air mall apart are a fountain that offers photo ops and a canal running alongside the shop areas.

Souvenir shops and upscale boutiques are some of the most popular types of stores here. There is also a drug store where you can find the health and medication items you need quickly. You'll enjoy the atmosphere, whether you're shopping or mainly people-watching.

Several waterfront restaurants are in this shopping center, as well as a coffee shop. The Interactive Aquarium is one of the most popular attractions for all ages. If you want to catch a movie, you'll even find a movie theater that's perfect for relaxing for a couple of hours.
Image by Carlos Valenzuela on Wikimedia under Creative Commons License.
5

Interactive Aquarium Cancun offers you an exciting insight into the underwater world. This aquarium allows you to observe a variety of marine species such as clown fish, seahorses, moray eels, jellyfish and piranha.

There are a total of 13 fish tanks here. All of them are well maintained and care is taken to avoid any water contamination that may place the lives of invertebrates and fishes at risk. A visit to this exciting aquarium will give you an opportunity to see and even touch coral, scorpion fish, dolphin skeleton, clown fish, soles and rays.

Interactive Aquarium Cancun is located close to the La Isla Shopping Center at the heart of the city’s hotel zone. Take your family with you on an exciting trip. Experience the thrill of viewing huge sharks at close quarters. Enjoy a breathtaking view of dolphins and sea turtles.

Here you will find marine life exhibits from the deep ocean to small tidal pools. Some of the rare species you will find here include the bull sharks, tiger and barracudas. Tiger sharks are very dangerous and the thrill of watching them so close is hard to describe.
Image by Eduardo P on Wikimedia under Creative Commons License.
6

When you are in Cancun, don't miss the opportunity to try Cancun’s local cuisine that includes delicious seafood paired with a bottle of wine or margarita.

To enjoy a mouthwatering array of Mexican dishes, visit Lorenzillo’s. It is a wonderful Lobster House that is located right on Nichupte Lagoon side on Kukulcan Boulevard.

Above the lagoon, you will find a wooden plank which offers access to Lorenzillo’s. Enjoy a drink prior to or after your dinner at the bar to the left of the plank. Lorenzillo’s breathtaking pirate theme is its highlight. The restaurant will take you to the midst of action all with its anchors, spyglass, maps and the wheel of a wooden ship.

The restaurant serves the finest lobsters caught by Isla Mujeres fishermen. Lorenzillo’s lobster farm has a storage capacity of 20,000 live lobsters waiting to be picked. This restaurant is a popular landmark of the city and is frequented by locals and tourists from across the world.

In keeping with traditional customs, it is built with native hardwoods and palm thatch. Do not miss out the roof made of an oversized palapa. Choose from an exciting menu that includes “El Pirata”, sea scallops served with guacamole and tortilla chips, the Caesar salad and delicious dishes made of jumbo shrimp, stone crab, soft shell crab and Chilean sea bass.
Image by corsi photo on Flickr under Creative Commons License.
7

7) Forum by the Sea Shooping Center

Forum by the Sea Shopping Center is a mall that offers beach access, making it one of the most popular places for shopping in Cancun. You'll find several stores selling clothes and representing designer and casual brands, including beachwear. Souvenirs and handcrafted silver items are among some of the items in high demand with visitors.

You can take advantage of two cinemas if you want to see a movie. The mall also has a disco that is popular with visitors and locals. A terrace on the building's second floor offers beautiful views of the Caribbean Sea. This terrace is an excellent place for relaxing.

This shopping center has a Hard Rock Cafe that is one of the most popular merchants in this mall. There are fast food restaurants popular in the area like Cambalche that are worthy of your consideration. If you're not sure what you want, the second floor has a food court with plenty of excellent choices.
Image by holachetumal on Wikimedia under Creative Commons License.
8

If you are fond of shopping for interesting and unique artifacts, do not miss a visit to the popular Coral Negro Flea Market on your trip to Cancun. This market is located close to the popular Forum by the Sea Shopping Center in the hotel zone.

Coral Negro is an open air market selling a variety of interesting souvenirs, henna tattoos, local arts and crafts, t-shirts and hair braiding. Here you will find several units selling a diverse range of products from across the country such as crystallized sweets and charro hats and suits.

Pick from an attractive range of embroidered garments in coarse cotton. Adorn your hands and feet with temporary Henna tattoos or transform your look with hair braids. Browse through the 50 interesting stalls here and haggle with vendors who believe in quoting rates off-hand.

Reach the depths of the market and you will find attractive jewelry stores. These air-conditioned stores have an array of sparkling and glittering Mexican gems and silver. No trip to Cancun is complete without shopping for authentic souvenir items such as hammocks, handicrafts, Mexican candy, charro suits and sombreros.
Image by David Stanley on Flickr under Creative Commons License.
9

One of the most popular landmarks of the city, Cancun lighthouse is a large structure and has a terminal from where ferries ply to and from Isla Mujeres. Designed specifically as a tourist attraction, you will find a restaurant on top of the lighthouse.

The location of the lighthouse was where pirates used to hang out in ancient times. Today pirate ship replicas carry passengers on day trips between Isla Mujeres (Spanish: Island of Women) and Cancun.

According to legend, the Isla Mujeres was where pirates used to house their women in safety as they went to sea. Some believe that it is a Mayan sacred retreat especially for virgin girls. Tourists from across the world enjoy the ferry ride from Cancun lighthouse to Isla Mujeres and relive those bygone days walking on the sands of the very island where pirate families lived.
Image by Rodrigo Accurcio on Flickr under Creative Commons License.

Create Your Own Walk in Cancun

Creating your own self-guided walk in Cancun is easy and fun. Choose the city attractions that you want to see and a walk route map will be created just for you. You can even set your hotel as the start point of the walk.

Downtown Cancun is a vibrant hub of shops and restaurants and where tradition and modernity go hand in hand. The main boulevard in the area is Tulum Avenue, which is very easy to recognize owing to the large sculpture of shells and shellfish in the middle of a traffic circle. It is known as "El Ceviche" and at night the feature is a particularly dramatic sight when illuminated. The...  view more

Part of the Yucatán Peninsula, Cancun is a major tourist spot on the face of Mexico, drawing annually millions of tourists. Yucatan is a home to some of the Mexican delights, such as Xtabentún Liqueur, which makes it a true magnet for visitors looking to pick up something memorable and...