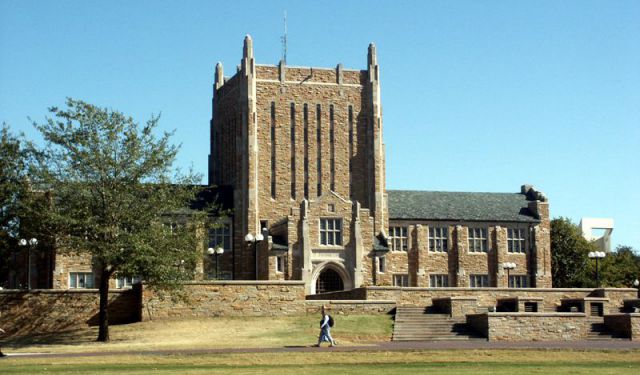 Image by Camerafiend on Wikimedia under Creative Commons License.

Tulsa’s picturesque beauty, scenic attractions and relaxing atmosphere make it a noteworthy destination. This town has hundreds of fabulous national monuments and landmarks, and this walking tour is a perfect opportunity to see some of the most stunning attractions in northeast Tulsa.
How it works: Download the app "GPSmyCity: Walks in 1K+ Cities" from iTunes App Store or Google Play to your mobile phone or tablet. The app turns your mobile device into a personal tour guide and its built-in GPS navigation functions guide you from one tour stop to next. The app works offline, so no data plan is needed when traveling abroad.

Tulsa County completed 8,000 seat Robert B. Sutton Stadium in 1981, naming it for its chief benefactor, a local oil executive. Sutton, however, was convicted in 1982 on obstruction of justice charges, and as a result the County renamed the ballpark Tulsa County Stadium. In 1989, Drillers Stadium received its current name.

The stadium now seats 10,997, making it the largest stadium in Double-A baseball. Originally a multi-purpose stadium with an artificial surface playing field, it now features a Prescription Athletic Turf (PAT) grass surface. Since its installation in 1993, the field has regularly been rated one of the best in the Texas League by players and managers.

Though it has primarily served as a baseball stadium, monster truck rallies and concerts can be held here. On December 19, 2008, construction began on a new ballpark in downtown Tulsa, ONEOK Field, which replaced Drillers Stadium before the 2010 baseball season.

Image by Nmajdan on Wikimedia under Creative Commons License.
Sight description based on wikipedia
2

Big Splash Water Park has the largest pool in the country, as well as numerous water slides, a water roller coaster, a small pool for children, and other interesting attractions. The park provides liquid entertainment for visitors of all ages. The complex is Tulsa's main summer attraction and is the only water park in town. Bring your children, and spend a fun, relaxing day under the sun!
Image by LB Bailey on Flickr under Creative Commons License.
3

It was originally built in 1953 by the Mid-Continent Supply Company of Fort Worth for the International Petroleum Exposition. Six years later, it was temporarily erected again for the 1959 show.

Due to the positive attention it attracted, the company donated the statue to the Tulsa County Fairgrounds Trust Authority which had it permanently installed in front of the Tulsa Expo Center for the 1966 International Petroleum Exposition. The statue's right hand rests on an oil derrick which had been moved from a depleted oil field in Seminole, Oklahoma.

An inscription at the base of the statue reads: "The Golden Driller, a symbol of the International Petroleum Exposition. Dedicated to the men of the petroleum industry who by their vision and daring have created from God's abundance a better life for mankind."

In 1979, the Golden Driller was adopted by the Oklahoma Legislature as the state monument.
Image by surs60 on Flickr under Creative Commons License.
Sight description based on wikipedia
4

The Expo Square Pavilion, sometimes called simply The Pavilion, and formerly known as the Tulsa Fairgrounds Pavilion, is a 6,311-seat multi-purpose arena.

It was built in 1932; the architect was Leland I Shumway. The building is in the PWA Art Deco style, built of blond brick with terra cotta ornamentation, and is considered one the prime examples of Art Deco architecture in Tulsa.

It was home to the Tulsa Oilers Central Hockey League team, during the 1960s and the Tulsa 66ers, of the NBA Development League, until they moved to the SpiritBank Event Center in 2008.
Image by liberalmind1012 on Flickr under Creative Commons License.
Sight description based on wikipedia
5

Opened in 1944, Moody's Jewelry is a great place to shop for all kinds of brilliant and sparkly items. The store has an amazing collection of jewelry and gorgeous diamonds, as well as a friendly, helpful staff. If you are looking for a unique, high-quality piece of jewelry, Moody’s is definitely a place you can trust.
Image by dog food sugar on Flickr under Creative Commons License.
6

6) University of Tulsa (must see)

The University of Tulsa (TU) is a private university awarding bachelor's, master's, and doctoral degrees. The university is historically affiliated with the Presbyterian Church USA. Tulsa's athletic teams compete in Division I of the NCAA as members of the Conference USA and are collectively known as the Tulsa Golden Hurricane.

In 2011, Tulsa's Collins College of Business was ranked 33rd in the country among undergraduate business schools by Bloomberg Businessweek based on a student survey. It was ranked 20th by a survey of recruiters.

U.S. News & World Report’s 2012 edition of Best Colleges ranked The University of Tulsa as 75th. TU’s No. 75 ranking is TU’s highest position ever in the U.S. News survey. This 2012 ranking was the 9th consecutive year that TU has been listed in the Top 100 national universities, and TU is the only Oklahoma university to be included within the top 100. The U.S. News & World Report 2012 rankings also show TU as 46th among the nation’s private doctoral universities.
Image by robertdx on Flickr under Creative Commons License.
Sight description based on wikipedia
7

At the top of The TU sits one of the campus' most notable landmarks, the McFarlin Library, which is named after Robert and Ida McFarlin, the library's primary benefactors. The McFarlins had only one stipulation with their gift, the view of Downtown Tulsa from McFarlin can never be blocked. Ground breaking ceremonies took place on May 3, 1929 and the edifice was dedicated on June 1, 1930.

The library continued to grow over the years, adding two five-story additions by 1979. Currently, the library houses over three million items and is noted for its collections of 20th-century British, Irish, and American literature, including the world's second largest collection of materials by James Joyce. It also houses the papers of Nobel Prize winner V.S. Naipaul. The library also contains a vast collection of books on Native American history. Renovations began in the spring of 2007 on a 12,000-square-foot (1,100 m2) addition that consolidated the library's computing and technology resources into one location. The library's reading rooms were restored to provide quiet areas for student and faculty study. Construction was completed in 2009.
Image by Camerafiend on Wikimedia under Creative Commons License.
Sight description based on wikipedia