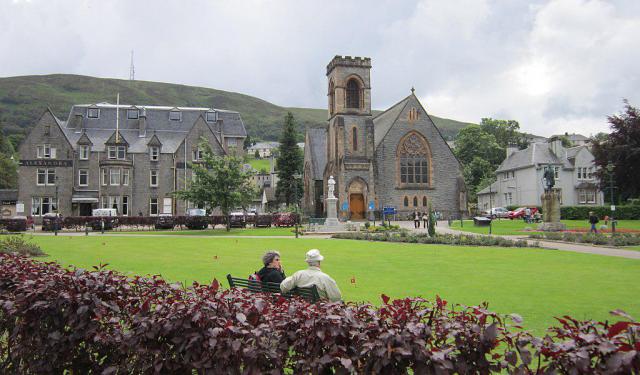 Image by Elizabeth B. Thomsen on Wikimedia under Creative Commons License.

Fort William is the largest town in the southwestern Scottish Highlands that attracts a number of tourists each year. Originally founded as a settlement near the fort, the town contains a number of prominent landmarks, including old churches, monuments, memorials, and the fort. Follow this self-guided tour to see the town's most popular sights.
How it works: Download the app "GPSmyCity: Walks in 1K+ Cities" from iTunes App Store or Google Play to your mobile phone or tablet. The app turns your mobile device into a personal tour guide and its built-in GPS navigation functions guide you from one tour stop to next. The app works offline, so no data plan is needed when traveling abroad.

The High Street is the heart of Fort William. Pedestrianized in the 1990s, this is a prime shopping venue of the town featuring a good number of boutiques and specialty shops, including the ones selling outdoors gear much needed in this area. Tourists looking for local gifts should check out The House of Scotland, The Granite House, or The Whisky Shop.
Image by Dbx54 under Creative Commons License.
2

The West Highland Museum, in the centre of Fort William, tells the story of the mountainous West Highlands of Scotland and its people. It has seven rooms on three floors, with an extensive collection of exhibits relating to the Jacobites, including the eighteenth century "secret portrait" of Bonnie Prince Charlie. Later royalty is represented by a collection of Victoriana, including the Highland regalia gifted by Queen Victoria to her favourite servant, John Brown.

The museum aims to cover every aspect of West Highland history, with other exhibits for archaeology, wildlife, Highland life, and military history including the history of Fort William itself. The Rough Guide describes the museum as "splendidly idiosyncratic". The museum was founded in 1922 by Victor Hodgson and has always been independent. It is a member of Museums Galleries Scotland.

Image by Laura Edwards on Flickr under Creative Commons License.
Sight description based on wikipedia
3

Located near Parade Road, St Andrew's Church is another prominent building. The original church was founded on this site by the Countess of Rosse in 1817 and it was known as Rosse Chapel. In the nineteenth century the building was replaced by George Baynton Davey. St Andrew's Church has an Abriachan granite façade and a roof of Cumberland slate. Its consecration took place on 9 Sept 1880. Famous as the "Queen of Highland Churches," the building is a Category A listed building.
Image by David Dixon on Wikimedia under Creative Commons License.
4

Duncansburgh Church is situated in the heart of the town, near the Alexandra Hotel. This religious building, which dates to 1881, is another prominent landmark of Fort William. The church houses an impressive tower, large window, and stained glass from the 1880s.
Image by ceiling on Flickr under Creative Commons License.
5

Beside Duncansburgh Church and the Alexandra Hotel you will find the town’s War Memorial. The memorial is a single statue of a soldier that stands on a paved area surrounded by linked chains. It commemorates all the men of Fort William and the surrounding area who sacrificed their lives in the First and Second World Wars.
Image by martin secker on Flickr under Creative Commons License.
6

Just across the path from the Fort William War Memorial you will see a bronze statue on a stone. It was created by W. Birnie Rhind in 1909 and depicts Donald Cameron of Lochiel, the nineteenth chief of Clan Cameron, who played a central role in the Jacobite Uprising of 1745.
Image by iant147 on Flickr under Creative Commons License.
7

Fort William Library is located in the center of Fort William on High Street. Here you can find a wealth of interesting and useful information about Fort William, its past and its intriguing environs. The library is closed on Sundays.
Image by Tim Browning on Flickr under Creative Commons License.
8

Old Fort William is located near the roundabout and is, of course, one of the most prominent attractions. The fort was founded to control the inhabitants after Oliver Cromwell's invasion during the English Civil War. It was named in honor of William of Orange.
Image by Nick R on Wikimedia under Creative Commons License.

Create Your Own Walk in Fort William

Creating your own self-guided walk in Fort William is easy and fun. Choose the city attractions that you want to see and a walk route map will be created just for you. You can even set your hotel as the start point of the walk.

Fort William's town centre provides a good shopping experience. The town’s main street - High Street – is the major shopping spot. Here you will find a number of local shops, specialty stores, gift and souvenir shopping venues. This walking tour will guide you to the most prominent and popular shopping places in Fort William.