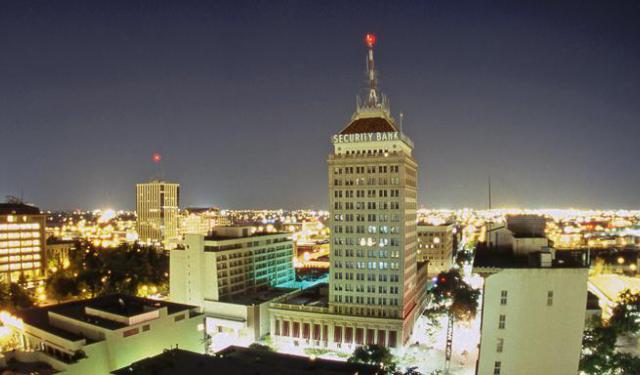 Part of California's San Joaquin Valley, Fresno is a relatively small city which does, however, contain a number of attractions, of historical and cultural importance, concentrated in the downtown area. A harmonious combination of old and modern architecture complements the setting. Take this orientation walk and see some of the most interesting sights of Downtown Fresno.
Image Courtesy of Wikimedia and JMora24.
How it works: Download the app "GPSmyCity: Walks in 1K+ Cities" from iTunes App Store or Google Play to your mobile phone or tablet. The app turns your mobile device into a personal tour guide and its built-in GPS navigation functions guide you from one tour stop to next. The app works offline, so no data plan is needed when traveling abroad.

St. John's Cathedral is the mother church of the Roman Catholic Diocese of Fresno, located at 2814 Mariposa Street. The parish was established in 1882. In 1878, Catholic settlers in the area recognized the need for a church and began to raise funds. The Central Pacific Railroad donated two lots and Bishop Francisco Mora y Borrell of the Diocese of Monterey-Los Angeles purchased two adjacent lots. Construction on the sanctuary began early in 1880 and the structure was completed in November. Bishop Mora dedicated the church to St. John the Baptist in May 21, 1882. It was a brick structure with a 90 ft (27 m) steeple and served the five Catholic families in the area.

By 1902, the congregation outgrew its home and began plans for a larger building. After Easter services on March 30, workers began to demolish the old building with the intent of constructing a new church on the same site. However, the pastor insisted on a new site at Mariposa and R Streets. Although parishoners complained that the proposed site was beyond the edge of town, the pastor prevailed. The cornerstone was laid August 3, 1902 and Archbishop George Montgomery dedicated the new sanctuary June 7, 1903.

The church was designed in a Gothic-Romanesque style by Thomas Bermingham and constructed of red brick. The facade features a triple entry framed by two square towers with spires. Above the entry is a small rose window.

Image Courtesy of Flickr and Matthew E. Cohen.
Sight description based on Wikipedia.
2

The Santa Fe Passenger Depot is a railroad station located in Fresno. It is currently used by Amtrak, the national passenger railroad system, for its San Joaquin passenger train service. The station was designed by William Benson Storey for the Atchison, Topeka and Santa Fe Railway and is very similar to the Stockton – San Joaquin Street Station. It has 5,400 sq ft (500 m2) for passenger service and another 12,300 sq ft (1,140 m2) for leasing.

The station was once the Santa Fe's Valley Division Headquarters, and was expanded or renovated nine times between 1908 and 1985, but was restored by the city to its original appearance in 2005 for US$6 million. Of the 73 California stations served by Amtrak, Fresno was the twelfth-busiest in FY2010, boarding or detraining an average of approximately 950 passengers daily.

Image Courtesy of Wikimedia and Bobak Ha'Eri.
Sight description based on Wikipedia.
3

Fresno City Hall is a great example of modern Fresno, located in the city’s downtown. Famous Canadian architect Arthur Erickson designed the Fresno City Hall building in 1991. The modern design of the building, which contrasts with the historic nature of the city's downtown, has caused some controversy, but most agree that it is a masterpiece.
Image Courtesy of Flickr and Great Valley Center.
4

The Holy Trinity Armenian Apostolic Church is situated at the corner of Ventura and M Streets in the part of Fresno’s downtown once known as “Armenian Town.” The parish of Holy Trinity Armenian Apostolic Church was founded in 1900. This beautiful church was designed by Fresno's first Armenian architect Lawrence Karekin Cone. Its construction was completed in 1913. The church is a good example of typical old Armenian church from Asia Minor and it was the first church in the United States built in this architectural style.
Image Courtesy of Flickr and Childers photography.
5

Liberty Theater, built in 1917, is an architectural landmark. The architects W. D. Coates and H. B. Traver designed this first movie theatre for Fresno in Second Empire Renaissance Revival style. The beautiful building is located on 944 Van Ness Street near the famous Fresno County Courthouse Park and is listed on the Local Register of Historic Resources.
Image Courtesy of Flickr and Matthew E. Cohen.
6

Chukchansi Park, formerly Grizzlies Stadium, is a city-owned baseball stadium located in Fresno, completed in 2002 as the home for the Pacific Coast League, Fresno Grizzlies. In September 2006, Chukchansi Gold Resort & Casino, affiliated with the Chukchansi tribe, announced it would be the premier corporate sponsor for Grizzlies Stadium, in a 15-year, US$16 million deal. The first game was May 1, 2002.

The stadium was designed by Populous (formerly HOK Sport), the firm responsible for many of today's sports stadiums like Oriole Park at Camden Yards, PETCO Park and Comerica Park.

Fresno County Courthouse Park lies in the heart of the city. It has had a major role in Fresno’s life since 1874. Many important public meetings, live concerts, and other events have taken place here. In the middle of the park stands the impressive courthouse building, which is surrounded by an entirely open-air museum. The park houses 22 monuments and plaques. The park's oldest sculpture is actually a drinking fountain titled “The Boy with the Leaking Boot Fountain” and was erected in 1895 by Daniel Nichols. The newest is the Purple Heart Memorial that was installed in 2006. This park is loved by locals.
Image Courtesy of Flickr and Matthew E. Cohen.
8

The Legion of Valor Veterans Museum is located in the famous Fresno Memorial Auditorium, on Fresno Street. The museum was founded to pay tribute to the soldiers that received the Medal of Honor, the Distinguished Service Cross, the Navy Cross, and the Air Force Cross. Here you can see a unique collection of medals, photos and military memorabilia. The museum is open every day from Monday through Saturday from 10 a.m. to 3 p.m.
Image Courtesy of Flickr and binksternet.
9

The Old Fresno Water Tower is a famous architectural symbol of Fresno that was built by George Washington Maher in 1894. It is situated at the corner of Fresno and O Streets, just near the Legion Valor Museum. The Tower was designed in American Romanesque style and its height is 109 feet. The Old Fresno Water Tower was a working water tower until 1963. Today it is the city's visitor center and one of the most popular tourist attractions of the city.
Image Courtesy of Flickr and Slideshow Bruce.

Create Your Own Walk in Fresno

Creating your own self-guided walk in Fresno is easy and fun. Choose the city attractions that you want to see and a walk route map will be created just for you. You can even set your hotel as the start point of the walk.