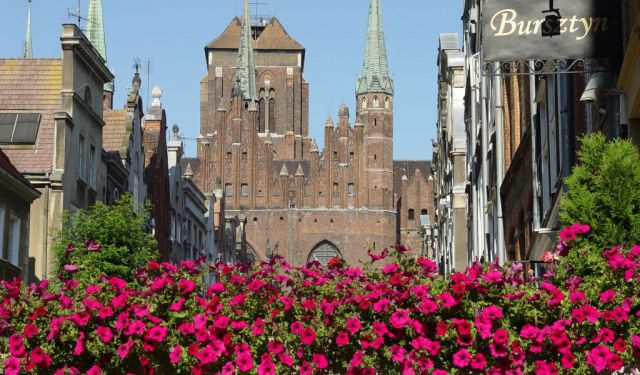 Gdansk has a long history of Catholicism, hence the many impressive churches found in the city. In Gdansk you will see some of the most spectacular medieval religious buildings, such as St. Mary's Church, St. Nicolas Church, and other churches that distinguish themselves as part of the urban landscape. Take this self-guided walking tour to discover the historic churches of Gdansk.
Image Courtesy of Wikimedia and Brosen.
How it works: Download the app "GPSmyCity: Walks in 1K+ Cities" from iTunes App Store or Google Play to your mobile phone or tablet. The app turns your mobile device into a personal tour guide and its built-in GPS navigation functions guide you from one tour stop to next. The app works offline, so no data plan is needed when traveling abroad.

The Church of St. John was built in the 14th century, and was severely damaged during WWII. Part of it is still under reconstruction. Inside you can see a late-Renaissance stone altar that has been in the place since 1599. Concerts are regularly performed here. The church represents the sacral architecture of Gdansk and is really worth a visit.
Image Courtesy of Wikimedia and Darpaw.
2

The Royal Chapel in Gdansk is an architectural masterpiece. Built in 1678-1681 in Baroque style, its facade is richly decorated with Baroque sculptures. The colored Royal Chapel stands near St. Mary's Church and stands out as a prominent landmark against the grayness of the church walls.
Image Courtesy of Wikimedia and Diego Delso.
3

St. Mary's Church or, properly, Basilica of the Assumption of the Blessed Virgin Mary, is a Roman Catholic church, which is the largest brick church in the world. It was begun in 1379 and is considered to be one of the largest European brick Gothic buildings, which include castles. From 1577 until 1945, when it was named the Marienkirche, it was the biggest Evangelical Lutheran church in the world. It is 105.5 m long, and the nave is 66 m wide. Inside the church is room for 25,000 people.

St. Mary's Church is a triple-aisled hall basilica with a triple-aisled transept. Both the transept and the main nave are of similar width and height, which is a good example of late Gothic style. Certain irregularities in the form of the northern arm of the transept are remnants of the previous church situated on the very same spot. The vaulting is a true piece of art, and was in great part restored after the war. Main aisle, transept and presbytery are covered by net vaults, while the side aisles are covered by crystal vaults.

Image Courtesy of Wikimedia and Gyddanyzc.
Sight description based on Wikipedia.
4

The Church of St. Nicholas dates back to the 14th century. It stands on the grounds of a temple from the 12th century. It has very large windows that are unusual for such an old church. It was not damaged by WWII, and has kept its Baroque and Rococo design. There are many gold decorations in the church, old paintings with scenes of Jesus' life, and a splendid chandelier crafted in 1617.
Image Courtesy of Wikimedia and Brosen.
5

St. Bridget's Church of Gdansk was built in 1396. Gothic in style, it was totally destroyed during WWII and then rebuilt in 1973. The church became a monument, as it sheltered activists of the Solidarity Movement. Inside the church, you can contemplate a unique work of art. There is a large altar made from amber, a petrified resin that is called Baltic Gold. It is found on the Baltic shore only.
Image Courtesy of Wikimedia and PAX.
6

St. Catherine's Church is the oldest parish church in the Old Town of Gdansk. It was built in 1227-1239. Before WWII, the shrine of the church enchanted visitors with its interior decorations -- Gothic, Mannerist and Baroque. In 1945, the church was destroyed, but then restored. When inside, make sure not to miss the paintings by Anton Möller and Izaak van den Blocke. In the church yard there is an old tombstone of the famous astronomer Jan Hevelius.
Image Courtesy of Wikimedia and Brosen.
7

In the place of today's St. Joseph's Church once stood a monastery established in 1391. Later, in the 15th century, a church was added in the name of the Mother of God The Holiest Virgin and Saints Elijah & Elisha. The monastery was destroyed in the 1670s, and the church became parish of St Joseph in 1840. It was burnt down during World War II and then restored.
Image Courtesy of Wikimedia and Claus-Joachim Dickow.

"Solidarity" was born in August 1980 and was the beginning of the end of the communist regime.

The representatives of the striking workers from many Polish factories and firms formed the Inter-Factory Striking Committee led by Lech Wałęsa who became later the president of Poland. ****PH***