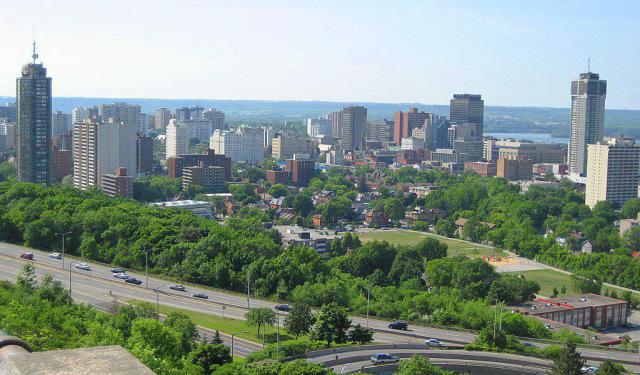 Hamilton, a port city on the western tip of Lake Ontario in Canada, is dominated by the Niagara Escarpment, a massive, forested ridge commonly referred to as "the mountain". Aside from this, there are other, man-made, attractions in the city, including HMCS Haida, a naval warship moored at the city's lakefront, and the Hamilton Military Museum, showcasing Canada's military history. To explore these and other notable sights of Hamilton, take this orientation walk.
Image Courtesy of Rick Cordeiro.
How it works: Download the app "GPSmyCity: Walks in 1K+ Cities" from iTunes App Store or Google Play to your mobile phone or tablet. The app turns your mobile device into a personal tour guide and its built-in GPS navigation functions guide you from one tour stop to next. The app works offline, so no data plan is needed when traveling abroad.

1) Cathedral of Christ the King (must see)

Cathedral of Christ the King is a Roman Catholic church in Hamilton, that was consecrated on December 19, 1933. It is the seat of the Bishop of the Diocese of Hamilton, and the cathedral of the Diocese of Hamilton. The cathedral interior is pure 13th Century English Gothic. Two kinds of limestone grace its walls and pillars: Indiana Limestone and Ontario Credit Valley Limestone. Its vaulted ceiling, with gold bosses, is a direct copy of Norwich Cathedralin England. It also has seating for over 1000 parishioners in the nave and 200 in the Sanctuary area, with television flat screens installed on the side Indiana limestone columns for blind spots. The left side altar with its magnificent large painting of Christ's entry into Jerusalem on Palm Sunday, contains the holy oils in three gold urns. The right side altar contains a massive painting of the Nativity Scene and a mosaic of the Eastern Catholic Churches: Our Lady of Perpetual Help. A large 88 ton marble Ciborium, sometimes erroneously called a Baldachino, in the shape of a crown, the symbol of a royalty and kingship, graces the north end of the cathedral over the tabernacle. Although this is not a normal feature of Gothic architecture, its Gothic design blends in perfectly with the architectural style of the Cathedral.
Image Courtesy of Wikimedia and Alan Walker.
Sight description based on Wikipedia.
2

An interesting place to visit when you are eager to fulfil your desire to attend cultural events is the Staircase Cafe Theatre, so named because of its unique iron spiral staircase. It is an original decorated place, with interesting architectural elements, and provides space for performances and shows in the 67 seat theatre, with good acoustics and comfortable seats. There are also two rehearsal halls and a cozy cafe.
Image Courtesy of martinus geleynse.
3

The Hamilton Military Museum is the place where you can learn everything about Canadian military history from the War of 1812 to World War I. You will be amazed by the reproduction of trenches and war scenes. In the museum's library are presented military manuals, general references and many other valuable writings about the Canadian army. The museum is open Tuesday to Sunday, 12 noon to 4 pm.
Image Courtesy of Flickr and Ian Muttoo.
4

Dundurn Castle is a historic neoclassical mansion on York Boulevard in Hamilton, which took three years and $175,000.00 to build, and was completed in 1835. The seventy-two room castle featured the latest conveniences of gas lighting and running water. It is currently owned by the City of Hamilton, which purchased it in 1900 for $50,000. The City has spent nearly $3 million renovating the site to make 42 of the original 72 rooms open to the public. The rooms have been restored to the year 1855 when its owner Sir Allan Napier MacNab, 1st Baronet, was at the height of his career.

Costumed interpreters guide visitors through the home, illustrating daily life from the 1850s. Currently, the Duchess of Cornwall, Camilla Parker-Bowles is the Royal Patron of Dundurn Castle. Castle also operates as a civic museum, and its grounds house other attractions. Dundurn Park and its associated green spaces are favourites for wedding portraits.

Image Courtesy of Wikimedia and Nhl4hamilton (Rick Cordeiro).
Sight description based on Wikipedia.
5

Doune Castle, also known as Dean Castle, is part of the Dundurn National Historical Site, situated near Dundurn park and Castle. Its origins are traced back to 1830-1840, when Sir Allan MacNab, who was the owner of Dundurn Castle, decided to erect a stucco-covered brick structure near his estate. Its importance derives from the historical fact that it belonged to one of the most important personalities of Canada and from its architectural style, resembling Dundurn Castle.
Image Courtesy of Flickr and DRB62.
6

The purpose of the Workers Arts and Heritage Centre is to preserve and bring honour to the activity, culture and history of the working people, to whom we are grateful for having a prosperous country. The tribute to the labourers is communicated through exhibitions, performances and art. The opening of the centre took place in 1996, having been housed in a magnificent establishment built in 1860 and known as The Custom House.
Image Courtesy of Flickr and dblackadder.
7

Bayfront Park is over $9 million transformed formerly vacant land into a versatile green space, with 1,800 metres (5,906 ft) of shoreline integrating fish habitat, native vegetation and facilities. The park is the site of a variety of summer festivals and concerts. A protected sandy beach and a 6-metre (20 ft) wide trail circles the park. Other important features of the park include: a public boat launch, fishing opportunities, a 250 space parking lot, and pedestrian and bicycle trails leading to Pier 4 Park.
Image Courtesy of Flickr and Sweet One.
Sight description based on Wikipedia.
8

In 2002, at the urging of Hamilton, Ontario MP Sheila Copps, Parks Canada purchased the Haida from the provincial government and towed her (with great difficulty) from her Ontario Place dock to a shipyard at Port Weller for a $5 million refit to her hull. She was taken to a new home on the Hamilton waterfront and arrived to an 11-Gun Salute from 31 Royal Canadian Sea Cadet Corps Lion and her 12 pounder Naval Field Gun on 30 August 2003, the 60th anniversary of her commissioning into the RCN. She now serves as a museum ship on the waterfront of Hamilton and was designated a National Historic Site of Canada in 1984.

Image Courtesy of Wikimedia and Balcer.
Sight description based on Wikipedia.

Create Your Own Walk in Hamilton

Creating your own self-guided walk in Hamilton is easy and fun. Choose the city attractions that you want to see and a walk route map will be created just for you. You can even set your hotel as the start point of the walk.

Westdale Village is a neighbourhood in Hamilton, bustling with specialty shops and interesting places. Locals and visitors are delighted by the plethora of boutiques, bakeries, pubs and stores with unique items. Be ready to devote some of your time to visiting the worthwhile places in Westdale, presented in this self-guided tour.

Religious life in Hamilton is channelled into many congregations, which are spreading different religions and providing space for worship for everybody. Take this tour and discover the oldest and most attractive churches with very impressive architecture and rich history.