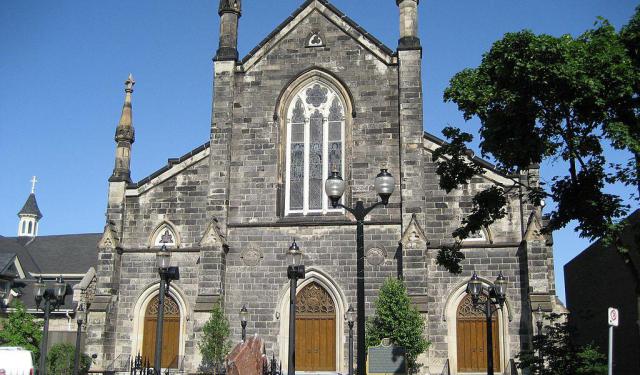 Image by Rick Cordeiro on Wikimedia under Creative Commons License.

Religious life in Hamilton is channelled into many congregations, which are spreading different religions and providing space for worship for everybody. Take this tour and discover the oldest and most attractive churches with very impressive architecture and rich history.
How it works: Download the app "GPSmyCity: Walks in 1K+ Cities" from iTunes App Store or Google Play to your mobile phone or tablet. The app turns your mobile device into a personal tour guide and its built-in GPS navigation functions guide you from one tour stop to next. The app works offline, so no data plan is needed when traveling abroad.

Christ's Church Cathedral, the cathedral church of the Anglican Diocese of Niagara was built in 1835, it is the oldest extant Anglican cathedral in anglophone Canada. The building has an unusual construction history. Originally a stuccoed wooden Palladian-Baroque structure designed by Robert Charles Wetherall, it was incrementally transformed into stone Decorated Gothic, initially to an 1848 design by William Thomas, with Thomas’s chancel and the first two bays of his nave being added to Wetherall's existing wooden church, the resulting hybrid being dubbed “the humpback church.”

The stone gothic nave was completed to a further design by Henry Langley in 1876, the original wooden portion having been demolished in 1872 to clear room for it and, inter alia, the chancel extended in 1924–25. Meanwhile, Thomas, in a state of indignation over the perverse use to which the Anglicans had put his design, took it to the Presbyterians, who built the still-standing St Paul’s Church to Thomas’s plan for Christ’s Church. Christ's Church has ornately carved west doors and fine stained glass windows.

Image by Nhl4hamilton (Rick Cordeiro) on Wikimedia under Creative Commons License.
Sight description based on wikipedia
2

St. John's Evangelical Lutheran Church is quite interesting, both from an architectural point of view and from a religious one. It was constructed in Gothic Revival architectural style. The building was established in 1882 as St. Paul's Baptist Church, later renamed St. Paul's Evangelical Lutheran Church, and finally in 1955 was rededicated to St. John. Being a bilingual congregation, the services take place in two languages, English and German.
Image by Pastordavid on Wikimedia under Creative Commons License.
3

St. Paul's Presbyterian Church is one of the most beautiful churches in Hamilton, with beautiful English-Gothic architecture, interesting elements and stained glass windows. It was built during a period of four years, from 1854 to 1857, and now it is part of the National Historic Site. The Cross of Sacrifice, erected by the congregation in 1921, is of interest as it is dedicated to those who died in the two world wars.
Image by sahlgoode on Flickr under Creative Commons License.
4

Another architectural masterpiece of Hamilton, with a high religious value is James St. Baptist Church. It was established between 1878 and 1882, by the appreciated architect Joseph Connolly. Such elements as geometric patterns and pointed windows reflect the tendencies of the thirteenth century. The interior of the church is also imposing, with its division into a nave and aisles and its amazingly decorated altar.
Image by sahlgoode on Flickr under Creative Commons License.
5

McNab Presbyterian Church was built in 1854, as a result of the expanding of the Knox Free Church Congregation and the necessity for a new place of worship. The building was designed by architect Isaac Buchanan in Gothic Revival style. The first establishment was a wooden church with a small capacity, but was reconstructed two years later, when a stone building was set by Scottish stonemasons. Until 1954, some important additions were built. The church is remarkable for its design and simplicity, which makes it very attractive.
Image by sahlgoode on Flickr under Creative Commons License.
6

The origins of the Central Presbyterian Church dates back to 1841, when the congregation was formed from only ten members and two adherents. The former place of worship was a schoolhouse at Jackson and MacNab streets, and later, in 1858, a bigger stone church was built but destroyed by fire. The congregation moved to the present site, where the beautiful new church was established and recently redecorated. The current structure was designed by architect John M. Lyle in Georgian style, and built in 1908.
Image by Nhl4hamilton (Rick Cordeiro) on Wikimedia under Creative Commons License.
7

St Joseph's Church has a rich history of about one hundred years, the period during which it spread the Catholic religion and received numerous devoted worshippers. At first, the services of the congregation were held in a little wooden church, known as The German Mission Church. But the necessity for more space led to the construction of this Roman-Catholic parish, completed on June 24, 1894, and dedicated to St. Joseph. It was built in Gothic Revival architectural style.
Image by Nhl4hamilton (Rick Cordeiro) on Wikimedia under Creative Commons License.
8

Melrose United Church is one of the most impressive churches in the region. Its congregation, which forms a union with Charlton Avenue Methodist Church and Westmount Presbyterian Church, was founded and consolidated on November 13, 1925, while the building which houses the church was established on March 31, 1929. Besides the usual services, the church also offers guitar classes and chorus meetings.
Image by Nhl4hamilton (Rick Cordeiro) on Wikimedia under Creative Commons License.

Create Your Own Walk in Hamilton

Creating your own self-guided walk in Hamilton is easy and fun. Choose the city attractions that you want to see and a walk route map will be created just for you. You can even set your hotel as the start point of the walk.

Hamilton, a port city on the western tip of Lake Ontario in Canada, is dominated by the Niagara Escarpment, a massive, forested ridge commonly referred to as "the mountain". Aside from this, there are other, man-made, attractions in the city, including HMCS Haida, a naval warship moored at the city's lakefront, and the Hamilton Military Museum, showcasing Canada's military...  view more

The city of Hamilton has very interesting and valuable museums and galleries, providing really beautiful and exceptional pieces of art. They illustrate the culture and the history of the city as well as contemporary tendencies. This self-guided tour is a helpful source for discovering these worthy places.

The richness of the cultural life and the large number of art galleries and talented artists in Hamilton can attract and delight both locals and tourists. There are many venues where one can see interesting exhibitions and presentations. Take this guide to experience those worth seeing.

Westdale Village is a neighbourhood in Hamilton, bustling with specialty shops and interesting places. Locals and visitors are delighted by the plethora of boutiques, bakeries, pubs and stores with unique items. Be ready to devote some of your time to visiting the worthwhile places in Westdale, presented in this self-guided tour.