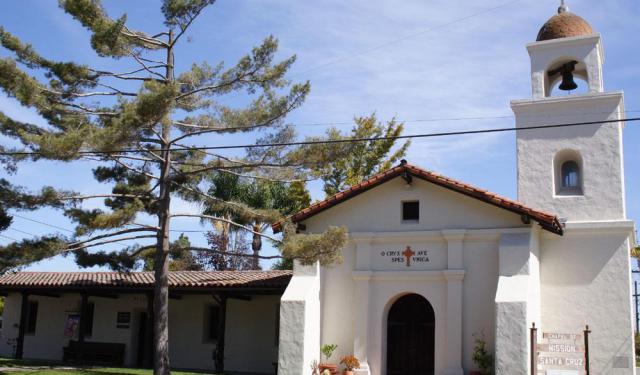 Image by Tule on Wikimedia under Creative Commons License.

Apart from surfboard-filled shores, Santa Cruz is also rich in history reflected in the old buildings listed on the National Register of Historic Places. While none of Santa Cruz's historic architecture sprang up overnight, a great deal of it was lost, or severely damaged, in a single go on October 17, 1989 as a result of the Loma Prieta earthquake. Still, some of the historic buildings have survived and today, thoroughly restored, define the character of downtown Santa Cruz.

Here are some of the historic spots that allow visitors a fantastic opportunity to immerse in a bygone era:

Holy Cross Church – one of the Catholic temples associated with Mission Santa Cruz, built in 1931; features a traditional Spanish garden.

Santa Cruz Civic Auditorium – home to the Santa Cruz Symphony and the Cabrillo Festival, opened in 1940.

Golden Gate Villa – a Queen Anne-style house from 1891; listed on the United States National Register of Historic Places since 1975.

To explore the historic part of Santa Cruz with its architectural landmarks in more detail, take this self-guided walk. Your next best thing to time travel!
How it works: Download the app "GPSmyCity: Walks in 1K+ Cities" from iTunes App Store or Google Play to your mobile phone or tablet. The app turns your mobile device into a personal tour guide and its built-in GPS navigation functions guide you from one tour stop to next. The app works offline, so no data plan is needed when traveling abroad.

Holy Cross Church is one of the Catholic churches in Santa Cruz that has a connection to Mission Santa Cruz. The parish's building was constructed in 1931 in the same style as the original church building. One of the highlights in the altar area is the tabernacle used in the original church building. The domed ceiling features colorful decorative tiles.

The church has a collection of vestments from the 18th and 19th centuries on display. These vestments have been made of silk and feature fine detailing. Colors and symbols used on these vestments correspond with the seasons of the Church Year.

One of the top highlights on the church grounds is the garden. This garden features a traditional Spanish style, complete with statuary and a fountain. The garden has a walkway and benches that encourage visitors to relax and enjoy the scenic beauty. You'll enjoy multiple opportunities to take pictures.

Image by Eugene Zelenko on Wikimedia under Creative Commons License.
2

The Neary-Rodriguez Adobe is Santa Cruz's oldest structure, with a likely construction date of around 1810. This adobe initially functioned as a duplex that housed the commander and his family on one side and the subordinates on the other. The building has had a second story since the mid-19th-century.

Visitors will enjoy seeing the original features, such as the stucco roofs and the adobe walls. The building is an excellent example of construction from the mission era.

Image by LPS.1 on Wikimedia under Creative Commons License.
3

The Octagon Building is an historic redbrick octagonal building in Santa Cruz. It was built in 1882, adjacent to the first (1866) County Court House, to serve as the County Hall of Records. In 1894, a major fire destroyed most of the nearby buildings, including the adjacent courthouse, but the brick Octagon survived.

In 1968, the records were moved to a new County Government Center. Many historic brick buildings on the Pacific Garden Mall were damaged during the 1989 Loma Prieta earthquake, but again the Octagon survived. On March 24, 1971, it was added to the National Register of Historic Places.

Since 1993, the Octagon has been used as the Museum Store for the adjacent Santa Cruz Museum of Art and History (MAH), and later as a coffeehouse. Vacant as of October 2016, the building is administered by the MAH.
Image by Eugene Zelenko on Wikimedia under Creative Commons License.
Sight description based on wikipedia
4

Opened in 1940 in downtown Santa Cruz, the Civic Auditorium is home to the Santa Cruz Symphony, the Cabrillo Festival and also to the events that include meetings, exhibits, concerts, and private gatherings. For many years, one entertainment venue is above all the others in Santa Cruz and that location is the Civic Auditorium that has impressed everyone with its beautiful architecture and better schedule. Arched granite pillars cover the brick entryway and warm colors fill the halls to maintain an inviting, relaxing atmosphere. Check the building out by reserving tickets to one of the upcoming events.
Image by Mark Nockleby on Flickr under Creative Commons License.
5

The Hinds House has been a historic bed and breakfast inn since 1982 and today it is the best example of William's Stick-Eastlake style buildings in Santa Cruz County. The current innkeeper of the Hinds House is Brion Sprinsock, and the house has ten rooms for guests, including the attic. The ground floor has common rooms, including the dining room, the sitting room, and the parlor. The original woodwork throughout the house is intact and polished.

Outside, to either side of the house, there is a large Norfolk pine and a 125-foot-tall (38 m) coastal redwood. Rooms are rented by the week.
Image by jdlrobson on Wikimedia under Creative Commons License.
Sight description based on wikipedia
6

Calvary Episcopal Church is situated at the corner of Lincoln and Center Streets, in downtown Santa Cruz. The mission of Calvary Church is to spread the word of God in Christ. Calvary comes from the new parish and it is associated with the meaning of Santa Cruz. Joseph Boston is the designer of the building that is said to be an imitation of a church in Pennsylvania. Nowadays, Calvary Church has grown and reached out to the surrounding area and to the entire community of Santa Cruz.
Image by Eugene Zelenko on Wikimedia under Creative Commons License.
7

The Del Mar Theater was originally built in 1936, at the height of the movie palace era. One of this theater's highlights is its Art Deco style that is reminiscent of the period of its construction. A restoration in 2002 gave the theater updated sound and projection systems for a first-rate experience.

This theater is a triplex in grand style. You can easily enjoy the latest Hollywood blockbusters here, as well as foreign and independent films. Midnight movie screenings are among some of the most popular events hosted here. Local community groups also host presentations here fairly regularly.

One of the most enjoyable areas of this theater for many visitors is the concession area, featuring a ceiling in Art Deco style. Organic popcorn with real butter is one of the most popular foods on the concession menu. You can also choose from other popular local snacks here as well.
Image by BWChicago on Flickr under Creative Commons License.
8

In the 1940s the house was operated as a restaurant, the Palais Monte Carlo. After passing through several owners, in 1963 the house was purchased by seafood magnate William W. Durney and his screenwriter wife Dorothy Kingsley, who sold it to the present owner. On July 24, 1975, the Golden Gate Villa was added to the United States National Register of Historic Places.
Image by Eugene Zelenko on Wikimedia under Creative Commons License.
Sight description based on wikipedia

Santa Cruz dates back to the founding of Mission Santa Cruz, founded in 1791. The modern city's incorporation dates back to 1866, and some of the most popular industries were agriculture, lime mining, gunpowder manufacturing, and lumber.

In July 1885, three teenage Hawaiian princes took a break from their boarding school, St. Mathew's Hall in San Mateo, and came to cool off in Santa...  view more