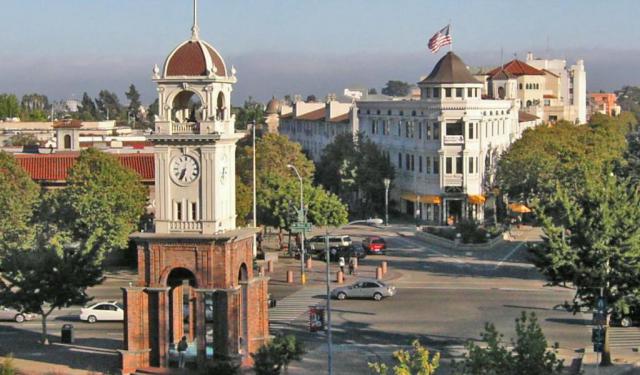 Image by Aaronbrick on Wikimedia under Creative Commons License.

Santa Cruz dates back to the founding of Mission Santa Cruz, founded in 1791. The modern city's incorporation dates back to 1866, and some of the most popular industries were agriculture, lime mining, gunpowder manufacturing, and lumber.

In July 1885, three teenage Hawaiian princes took a break from their boarding school, St. Mathew's Hall in San Mateo, and came to cool off in Santa Cruz. There they surfed the mouth of the San Lorenzo River. For this, Santa Cruz is largely regarded as the birthplace of surfing in the United States.

In modern times, Santa Cruz has become known for being at the center of progressive activism for causes including medical marijuana legalization, immigrant and worker rights, and the LGBT rights. Santa Cruz is also a center of the organic agriculture movement and has a large foot print in the high tech industry.

To immerse yourself in local history, stop by Santa Cruz Mission State Historic Park. You can also take in more about local history at the Santa Cruz Museum of Art & History. Don't miss the Del Mar Theater, where you can see a beautiful example of a 1930s movie palace.

If you're in search of shopping or dining options, be sure to check out Pacific Avenue and the Santa Cruz Wharf. You can find cuisine that includes fresh seafood and shops selling fun nautical items easily. The Santa Cruz Beach Boardwalk, featuring two National Historic Landmarks, is a place you don't want to miss. It offers a wide range of rides and games for people of all ages.

Take this self-guided walking tour to visit the most important attractions in Santa Cruz at your own pace.
How it works: Download the app "GPSmyCity: Walks in 1K+ Cities" from iTunes App Store or Google Play to your mobile phone or tablet. The app turns your mobile device into a personal tour guide and its built-in GPS navigation functions guide you from one tour stop to next. The app works offline, so no data plan is needed when traveling abroad.

Mission Santa Cruz was a Spanish mission founded by the Franciscan order. The mission was founded in 1791 and named for the feast of the Exultation of the Cross, the name that the explorer Gaspar de Portola gave to the area when he camped on the banks of the San Lorenzo River on October 17, 1769, and erected a wooden cross. As with the other California missions, Mission Santa Cruz served as a site for ecclesiastical conversion of natives, first the Ohlone, the original inhabitants of the region, and later the Yokuts from the east.

The current Holy Cross Church was built on the site of the original mission church in 1889, and it remains an active parish of the Diocese of Monterey. A half-size replica of the original mission church was built near the mission site in the 1930s and functions as a chapel of Holy Cross Church. The mission complex at one time included as many as 32 buildings.

The Neary-Rodriguez Adobe is the only surviving building from the original mission. It was a dormitory for native acolytes and today it functions as a museum of the Santa Cruz Mission State Historic Park. This little museum focuses on historical visual culture and carries a permanent collection of historical artifacts that exemplify the history of Santa Cruz. The museum offers many interesting activities and their program also includes tours of the Evergreen Cemetery, Octagon building and the Davenport Jail Museum. This building is an excellent venue for visitors interested in the unique history of Santa Cruz.

Image by Ed Bierman on Flickr under Creative Commons License.
Sight description based on wikipedia
2

The Santa Cruz Museum of Art & History has exhibits spanning three floors, with exhibits in English and Spanish for greater convenience. Conexiones highlights select pieces from the permanent collection at the Museum of Latin American Art. Queer Santa Cruz offers a closer look at Santa Cruz's LGBTQ community. You can learn more about hidden parts of the city's history through the Santa Cruz County History Gallery and Do You Know My Name?.

Art & Healing: 30 Years After the Loma Prieta Earthquake tells the story of the rebuilding efforts after the devastating earthquake. You can also enjoy outdoor exhibits, which often have a focus on life in the community following challenging times. Don't miss out on the Mary and Harry Blanchard Sculpture Garden, with its rooftop location.

In addition to stunning collections, the museum also hosts an exciting array of events. Film festivals are always worth checking out here. You may even have the chance to take in an artist's panel with questions and answers.

Image by WCCasey on Wikimedia under Creative Commons License.
3

The Del Mar Theater was originally built in 1936, at the height of the movie palace era. One of this theater's highlights is its Art Deco style that is reminiscent of the period of its construction. A restoration in 2002 gave the theater updated sound and projection systems for a first-rate experience.

This theater is a triplex in grand style. You can easily enjoy the latest Hollywood blockbusters here, as well as foreign and independent films. Midnight movie screenings are among some of the most popular events hosted here. Local community groups also host presentations here fairly regularly.

One of the most enjoyable areas of this theater for many visitors is the concession area, featuring a ceiling in Art Deco style. Organic popcorn with real butter is one of the most popular foods on the concession menu. You can also choose from other popular local snacks here as well.
Image by BWChicago on Flickr under Creative Commons License.
4

Pacific Avenue is the center of Santa Cruz's downtown area. One of the things that stand out for visitors about this street is its pedestrian-friendly nature. Theaters, stores, and restaurants are along this street, and visitors can also take full advantage of street performers who are always ready to entertain passers-by.

Street vendors are always plentiful on this street, offering a variety of items to enjoy. Popular local stores to enjoy include Sacred Beads & Jewelry Gallery, Crossroads Trading Company, Think Pawsitive, and the Happy High Herb Shop. If you're looking for popular retail chain locations, some of the most popular options include Forever 21, Gap, Urban Outfitters, and the Salvation Army Thrift Store.

The Santa Cruz Wharf is one of the city's most popular waterfront locations and boasts dining, shopping, and recreational activities to appeal to visitors of all ages. Restaurants here allow for outdoor dining and serve cuisine as diverse as traditional seafood, Asian and Mexican comfort food. Shopping options include gift shops selling jewelry and T-shirts, nautical souvenirs, and local eco-friendly products.

This wharf is a perfect place to view local marine life. Sea lions, whales, and dolphins are frequently spotted, as well as sea otters. You can also watch bird species that frequent the area looking for food, as well as various fish species. Sea scopes will help you get a better view of the wildlife.

There are plenty of recreational opportunities here. There is a bocce court, allowing you to easily play this fun bowling game. You can even rent a boat or kayak to get out on the water.
Image by Runner1928 on Wikimedia under Creative Commons License.
6

The Santa Cruz Beach Boardwalk has been serving residents and visitors since 1907. Two of the most popular landmarks within this park enjoy National Historic Landmark status. One is the Looff Carousel ring toss, offering a unique challenge for visitors. The wooden roller coaster dating back to 1924, the Giant Dipper, offers turns and dips that still impress.

One of the highlights is an indoor arcade that offers something for everyone. You can play laser tag or miniature golf, try your hand at pinball, or check out the vintage games. The most recent video games that have redemption tickets you can use for prizes are also here. An extra treat that awaits nearby is a bowling alley.

If you're in the mood for classic boardwalk food, you're in luck when you come here. Corn dogs are a popular favorite and the ones available here use a special family recipe. Some of the more unique options include deep-fried artichoke and Twinkies, as well as chocolate bacon.

Having the beach so close by is one of the best reasons to visit this park, in addition to the attractions. The beach that runs alongside the boardwalk is part of the Monterey Bay National Marine Sanctuary. This area is not only a beautiful place to enjoy a walk or do some sunbathing but is also a perfect place to see some wildlife. Whales and dolphins are popular here, and you have great chances to seeing sea otters or sea lions on the beach.

See two of the oldest rides still in use in California.
Image by Larry Pieniazek on Wikimedia under Creative Commons License.

Apart from surfboard-filled shores, Santa Cruz is also rich in history reflected in the old buildings listed on the National Register of Historic Places. While none of Santa Cruz's historic architecture sprang up overnight, a great deal of it was lost, or severely damaged, in a single go on October 17, 1989 as a result of the Loma Prieta earthquake. Still, some of the historic buildings have...  view more