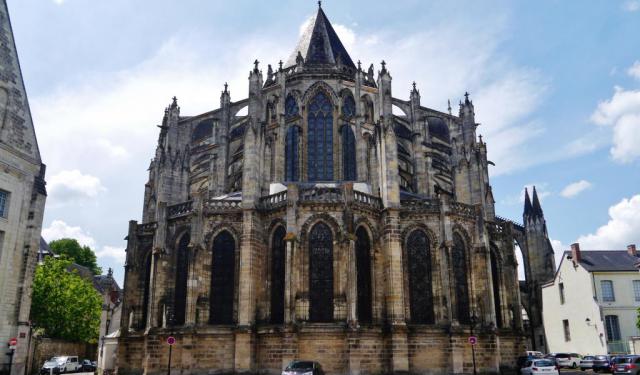 Image by Zairon on Wikimedia under Creative Commons License.

The city of Tours is forever linked to the "Battle of Tours". In 732 AD, Frankish leader Charles Martel, a Christian, defeated a large army of Spanish Moors. The victory halted the advance of Muslim into Western Europe. Moors retreated from Gaul and Western Europe remained Christian.

In Tours one can find many historical Christian churches. The oldest among them, Basilica of St. Martin and Saint Gatien's Cathedral, trace their history all the way back to 4th century. On this self-guided walk, you will visit the most important historical churches in the old city of Tours.
How it works: Download the app "GPSmyCity: Walks in 1K+ Cities" from iTunes App Store or Google Play to your mobile phone or tablet. The app turns your mobile device into a personal tour guide and its built-in GPS navigation functions guide you from one tour stop to next. The app works offline, so no data plan is needed when traveling abroad.

The beginning of the story of the Basilica of St. Martin goes all the way back to the 4th Century, when a small chapel was established here. The chapel was dedicated to St. Martin, who was the bishop of Tours at that time. Destroyed and rebuilt many times since, it was architect Victor Laloux that designed the Roman-Byzantine basilica on the site today.

The first basilica was built in the fifth century over the ruins of an earlier chapel. The basilica was dedicated to Saint Martin of Tours and it was erected over his tomb. Alcuin, an adviser of Charlemagne, was appointed Abbot of the monastic establishment of Saint-Martin's, developed as a collegiate church and governed by a community of canons.

The medieval chapel was destroyed in the French Revolution. Only two old towers connected to the medieval chapel are still standing today. Between the years of 1896 and 1924 the present church was built by Victor Laloux in a neo-Byzantine style on the site of the original basilica. The church was dedicated in 1925.

It has been said the exterior design is reminiscent of an old European synagogue. The interior has white stone walls and stained glass windows showing scenes in the life of the Saint. The new, modern crypt of the church holds the remains of Saint Martin.

The Basilica is located in the Tours Old Town. Saint Martin was third bishop of Tours. He is one of the most familiar and recognizable Christian saints in France. Because of his military experience and his leadership of French Christians, Saint Martin is seen as a protector of France.


Image by BUFO88 on Wikimedia under Creative Commons License.
2

Situated on the Loire riverbank, the Eglise Saint Saturnin, formerly known as the Eglise des Carmes, was built in 1473 with the help of King Louis XI. Its wonderful façade overlooks Rue Littré. Inside the church you can see choir's stalls which originated at the old Abbey Cormery and are an important historical treasure today.
Image by Pline on Wikimedia under Creative Commons License.
3

The Eglise Saint Julien is one of the prime religious monuments of Tours. Situated at the beginning of the Rue Nationale, it’s near the Pont Wilson bridge across the Loire River. Dating from 1240 to 1840, this church is a listed historical monument that features beautiful stained glass windows and magnificent architecture.

Resulting from several successive campaigns of construction and recovery, the current abbey church mixes several architectural styles. In the second half of the xi th century, Abbot Gerbert makes a total reconstruction of the abbey church in style novel . The bell tower-porch Note 1 which gives access to the current church certainly dates from this phase of reconstruction. The reliefs of the capitals of the porch, designed by Gustave Guerin 9 , date from the xix th century; they were put in place during the 1960 restoration.

The new church was consecrated in 1084 , under the Archbishopric of Raoul I st of Langeais; it is dedicated to "our Lady, Saint Julian and all the saints".

The new nave of the abbey church was rebuilt between 1243 and 1259 10 ; at that time, gothic architecture prevailed. The church therefore takes on the general form that we know today. Part of the stained glass windows that adorn the nave and the choir were made by Max Ingrand. These windows replace those created in the xix th century in the workshop Lobin , destroyed during World War II.
Image by Pline on Wikimedia under Creative Commons License.
4

The Eglise Saint Grégoire des Minimes is part of the Minimes convent, built in the early 17th Century. The church's facade is very minimalistic-looking, in line with the classical style of the time. Inside you can see a rich collection of impressive sculptures and woodworks.

In addition to the interesting baroque decoration of the western facade, this building has a set of woodwork executed from 1677 to 1679 by a group of 3 carpenters and 2 cabinetmakers (two of whom will become minimal brothers in 1679, Antoine Audric and Cot Taboué), including one canopied oak carved xvii th century .

The church has three side chapels accompanied by their altarpieces and statues representing respectively: the Blessed Virgin Mary , Saint Anne and Saint Joachim in the first chapel.
Image by Strikehard on Wikimedia under Creative Commons License.
5

Lidorius' church burned in 558 and was rebuilt by Gregory of Tours in 590. In 1160 a new structure was erected in the Angevin style. This one burned before it was finished. Work resumed in 1220. Many renovations in different styles were made. The choir and transept used the lower Romanesque structure. Parts were Gothic or Rayonnant.

Further work was interrupted by the Hundred Years War, a long time to wait for the cathedral to be finished. But not to worry, The nave was finished in the 15th century. The two Renaissance towers were erected outside the ancient city walls. The first tower was finished in 1534. The second was put up in 1547.

During the French Revolution the church was magically changed into a Temple of Reason. Napoleon made up with the Pope however, and reason was restored and the church became a church again. Major restoration commenced in 1993. The organ and the upper windows were restored. The rose window was completed and a new altar dedicated in 2018.

The sides of the cathedral are supported with enormous flying buttresses and spires. The north transept has two extra buttresses and a rose window. The window has a bar across its face to provide extra strength.

The nave holds a monumental tomb for the children of King Charles VII and Ann of Brittany. Made in 1506, the Italian style tomb is of carrara marble.

Three enormous rose windows of stained glass adorn the west, the north and south ends of the cathedral. The windows were made in the style of the glass artisans of Tours. They admit more natural light and sharpen the images. This permitted more expressiveness in the subjects depicted, creating a three-dimensional effect.

At last, the cathedral is finished. The "wait" is over.

Why you should visit
To be overwhelmed by the craftsmanship of the middle ages, especially with the great rose windows. The building arts in this church have been lost, but some things remain.

This site dates back to the earliest days of Christianity in the region. A simple chapel was erected here named Saint-Pierre des Corps in 858. While the church has been rebuilt several times, part of the ancient chapel remains visible today.
Image by Desprez37 et Catherine Desprez on Wikimedia under Creative Commons License.

Create Your Own Walk in Tours

Creating your own self-guided walk in Tours is easy and fun. Choose the city attractions that you want to see and a walk route map will be created just for you. You can even set your hotel as the start point of the walk.

Having successfully preserved much of its historic heritage, Tours is particularly famous for its original medieval district – Vieux Tours. The bulk of it is concentrated around three squares: Place du Grand Marché, Place Plumereau and Place de Chateauneuf.

A stroll through the Old Town, day or night, offers many delights, and is best started at Place Plumereau. Lined with wood-framed,...  view more

The Roman Emperor Augustus named the city Caesarodunum. But it was always Tours. Caesar left the Tours Ampitheatre, the largest amphitheater of the Empire. It's good to be Caesar.

Tours is located on the River Loire. It stands between Orleans and the Atlantic shore. It is famous for The battle of tours in 732 CE when Abdul Rahman Al Ghafiqi was defeated at Poitiers by Charles Martel.