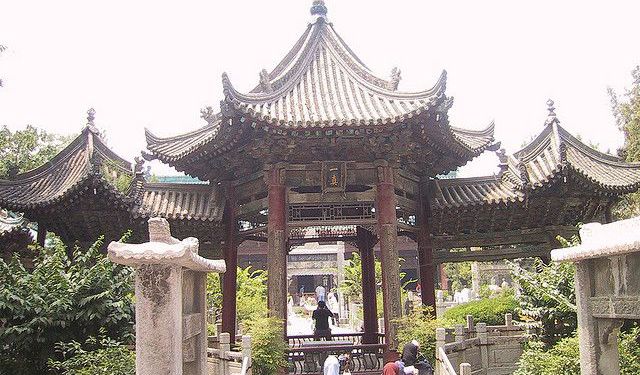 Situated at the one end of the historical Silk Road, Xian for centuries has been a melting pot of different cultures and faiths, seeing traders from all parts of Asia come to do business. Many foreigners eventually settled here, bringing along their cuisine, customs and religious practices.

Hence the number of pagodas, Buddhist and Taoist temples, as well as mosques found in Xian, some of which trace back over a thousand years. On this self-guided walking tour you will have a chance to visit a few historical religious sites located inside the walled old city.
Image Courtesy of Flickr and Omar A..
How it works: Download the app "GPSmyCity: Walks in 1K+ Cities" from iTunes App Store or Google Play to your mobile phone or tablet. The app turns your mobile device into a personal tour guide and its built-in GPS navigation functions guide you from one tour stop to next. The app works offline, so no data plan is needed when traveling abroad.

The Great Mosque in Xian is the place of worship of the Muslim population. It is the oldest, largest and best preserved mosque in China.

The Great Mosque was built in Xian during the reign of the Tang Dynasty in 742 AD. Several additions were made to the original structure during the reigns of the Song, Yuan, Ming and Qing Dynasties. Xian is located at the beginning of the historic Silk Route and Muslim traders from other parts of Asia came here for purchasing silk and selling products from their respective countries.

The Great Mosque has a traditional Chinese design unlike those in Arabia and Persia. There are no minarets. The Mosque complex covers an area of 6000 square meters and has four courtyards. The first courtyard has a tile covered wooden arch constructed in the 17th century. There are chambers on either side with furniture dating back to the Ming and Qing Dynasties. The second courtyard has a stone arch and steles engraved with calligraphy. The main prayer hall with enough space to accommodate a thousand worshippers is found in the fourth courtyard. It is the only mosque open to visitors in China. Non Muslims are not permitted to visit the main prayer hall when prayer is in session.

In many Chinese cities, there is a template dedicated the city god. The City God Temple in Xian is one of the largest city god temples in China. Located on West Avenue, just a short walk away from the Drum Tower, it is one of the only two remaining Taoist temples inside the walled old city.

The current temple was built in 1432 during the Ming Dynasty. Over time additional buildings were added to provide ancillary functions. Today the City God Temple complex includes an archway, the Pavilion of the God of Literature, the Gate of Etiquette, the Hall of Birth Year, the Hall of Fire God, and a number of other buildings.

The temple was damaged during World War II and again during the Cultural Revolution in 1960s. But it has since been beautifully restored. The temple is free to enter and you are free to wander around, but please be respectful to the worshipers there since it is an active temple.

Image Courtesy of Wikimedia and Acstar.
3

The Wolong Temple is a Chinese Buddhist temple located one block north of the Forest of Stone Steles Museum in Xian. Wo Long means Sleeping Dragon and the temple is also called the Sleeping Dragon Temple.

In 1901, the Emperor Guagxu and the Empress Dowager Cixi fled to Xian after the Boxer Rebellion. They expanded the temple and ordered statues from Mongolia and Tibet. There is also a large bell cast in the year 1033. The recently restored Wolong Temple continues to be an active place of worship for Buddhists in Xian.
Image Courtesy of Wikimedia and Acstar.

Xian became a cultural and political center of China in the 11th century BC and was the capital city of eleven imperial Chinese dynasties.

For a western comparison, Xian closely resembles Rome. At the beginning of the first millennium, there were two major powers sitting at the ends of the civilized world, the Roman Empire in the west and the Han Dynasty in the east, each commanding roughly the...  view more

Xian is the former starting point of the ancient Silk Road. It was here that foreign traders came to do business and procure local goods, like Chinese tea, silk and porcelain - all were much sought after internationally, for centuries.

Although the commercial center in China has moved to its coastline in recent years, Xian is still an amazing place where you can do some quality shopping,...  view more