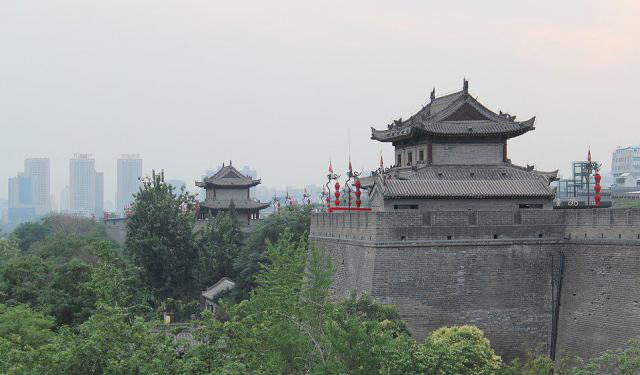 Image by Aaron Zhu on Wikimedia under Creative Commons License.

Xian became a cultural and political center of China in the 11th century BC and was the capital city of eleven imperial Chinese dynasties.

For a western comparison, Xian closely resembles Rome. At the beginning of the first millennium, there were two major powers sitting at the ends of the civilized world, the Roman Empire in the west and the Han Dynasty in the east, each commanding roughly the same population size and land mass. The Romans lasted a little over 500 years while the Han made 422. The two empires never had a direct contact, but were linked by a trade route known as the "Silk Road".

Xian was the capital of the Han Dynasty, and the main commercial hub and starting point of the Silk Road in China.

Prior to the Han Dynasty, except for a brief period of about 15 years, there were anywhere from several to dozens of small countries co-existed within the territory of China, each with its own language, much like Europe has been. It was largely during the course of the Han Dynasty that China emerged as a unified nation it is known today.

Later, in the 7th-10th centuries AD, Xian was capital of the Tang Dynasty which is generally considered the height of ancient Chinese civilization and a golden age of cosmopolitan culture. Xian reached its peak during the Tang period. Just as the “Eternal City” and its empire had left a large imprint on the Western civilization, Xian played a similar role in the Chinese civilization.

Today, tourists from all over the world flock to Xian anxious to visit its historical landmarks and archaeological sites. Chief among them is the Xian City Wall. Measured at 12 meters high and 14 kilometers long, it is the largest defense barrier in the world. The Small Wild Goose Pagoda dates back to 709 AD in the Tang Dynasty and was the home of the first Buddhist "Bible" brought from India. For centuries, the Bell Tower served to announce important news to the local citizens.

Xian is the place to visit for anyone interested in getting a glimpse of China's glorious past. This self-guided walking tour takes you to see some of the most iconic landmarks in the former imperial capital of Han and Tang Dynasties of China.
How it works: Download the app "GPSmyCity: Walks in 1K+ Cities" from iTunes App Store or Google Play to your mobile phone or tablet. The app turns your mobile device into a personal tour guide and its built-in GPS navigation functions guide you from one tour stop to next. The app works offline, so no data plan is needed when traveling abroad.

The wooden Bell Tower in Xian is the largest and best preserved bell tower in China. It stands at the very center of the city at the intersection of the four main streets: North, South, East and West Avenues. The Bell Tower was constructed in 1384 during the reign of the Ming Dynasty and is a symbol of Xian.

According to the legend, during the earlier years of Ming Dynasty, there were frequent earthquakes in the region near Xian. It was believed that the earthquakes were caused by a dragon turning over and over in the river under the city.

The Ming emperor, Zhu Yuanzhang, felt very anxious and wanted to subdue the dragon. The Taoist priests suggested to build a bell tower at the center of the city as the sound of a bell is considered the voice of heaven which scares the dragon. The emperor took the advice and ordered to build the biggest bell tower in the country.

The Bell Tower is 36 meters high. It stands on a 9 meter high and 36 meter long brick base. Similar to other Chinese clock towers, Xian Bell Tower was mainly used for time reporting and publishing news in ancient times.

It has also been used for many other purposes in history. During the 1911 revolution, the republic rebels fought fiercely with the Qing imperial army deployed here. In 1927, a cinema was opened here by a student who came back studying in the United States. This was the first cinema in Xian history. During the World War II, the Bell Tower became an alarm station for warning the Japanese air raids because of its high terrain.

Today the Bell Tower is open to public as a museum. It is particularly beautiful at night when lanterns hung from the eaves light up the tower.

The Xian Drum Tower is the largest among drum towers in China. It houses a drum museum where visitors can see ancient drums dating back to over a thousand years.

The Xian Drum Tower was constructed in 1380 during the reign of the Ming Dynasty. It has a base of blue bricks with a wooden tower on top. A large drum was placed in the tower and struck to signal sunset in the evening. The practice was restored in 1950 to encourage tourism. In 1996, a large drum similar to the one that was once in the tower was made from a single piece of high quality cowhide and placed in the tower.

Twenty four drums were placed in the north and south of the Drum Tower. They represent the twenty four solar systems used by the ancient Chinese to predict the changes in climate and to warn local farmers. The hall in the first floor has drums of all sizes decorated with Chinese characters depicting good luck. Visitors are not allowed to touch these drums. The drum museum displays a variety of drums used in ancient China. A drum beating performance takes place here every day. Visitors can get a spectacular view of the city of Xian from the top of the Drum Tower.
Image by David Stanley on Flickr under Creative Commons License.
3

The street from the Drum Tower to Beiyuan Gate in Xian is referred to as the Muslim Street. It is a shopping street with shops selling products and restaurants serving dishes with an Islamic flavor.

Muslim Street is the area where the muslins live in Xian. It is 500 meters long and paved with black stones. The buildings that flank the street retain the old architecture of the Ming and Qing Dynasties. The area has ten mosques of different sizes including China’s earliest Great Mosque. The muslins came to China from central Asia through the silk route. The street offers a unique atmosphere compared to other parts of the city and adds to the cultural diversity of Xian.

The Muslim Street is frequented by locals for the many delicacies served in the restaurants. Well known dishes include bread soaked in mutton stew, pickled vegetables, sliced beef stirred with rice and small crisp mutton. The latter dish consists of mutton wrapped in starch and steamed. Black plum juice is served to visitors to wash down the rich food served by the restaurants in Muslim Street.
Image by Grey World on Flickr under Creative Commons License.
4

The Xian City Wall is the only surviving complete wall surrounding a city in China. It is also the largest defense barrier in the world.

Emperor Zhu Yuanzhang of the Ming Dynasty erected the Xian City Wall in the 14th century. When the emperor captured Xian, he was advised by a wise hermit called Zhu Sheng to build high walls to defend the city and then establish his empire by unifying all the other provinces. The emperor heeded the sage advice, unified China and ordered all local governments to built strong city walls to defend their territory. The Xian City wall was the strongest among the other city walls in the country.

The Xian City Wall was an improvement on an old wall built during the reign of the Tang dynasty. It is 12 meters high and 14 kilometers long. There are 98 watch towers placed 120 meters apart. The wall has four gates consisting of three towers in each direction. The gate towers were used to lift and lower drawbridges. A narrow tower and a main tower were also built near each gate.

Tunnels connected the gate towers and 11 passages for horse driven carts took soldiers to the top of the wall. There are also four larger watchtowers at each corner of the wall.

Today visitors can rent bicycle and ride on the city wall. A round trip would take about two hours with frequent stops in between - remember this is the longest city wall structure in the world with a total distance of 14 kilometers. It will be an experience that you will never forget!
Image by Ronnie Macdonald on Wikimedia under Creative Commons License.
5

The large Municipal Xian Museum was opened to the public on World Museum Day, the 18th of May 2007. It is a repository of objects relating to the 13 dynasties that called Xian their capital.

The Museum displays over 130,000 exhibits from different dynasties that ruled Xian. There are objects from the Zhou Dynasty, the Han Dynasty, the Tang Dynasty, the Qin Dynasty and the Ming Dynasty among others. The first floor has Buddhist stone statues and gilded figures made of bronze. There is also a theater showing the history of the Wild Goose Pagoda here. The second floor has jade objects, seals and screens with calligraphy on display. A collection of paintings by Zheng Banquiao a well known Qing Dynasty painter is displayed here. The underground floor has exhibits unearthed from different parts of the city. Temporary exhibitions displaying objects from districts and locations around are held periodically by the Xian Museum.

The Small Wild Goose Pagoda is one of the two pagodas in Xian that date back to the Tang Dynasty (618 to 907 AD). It has a unique architectural design that helped the structure withstand the earthquakes that shook the city.

The Small Wild Goose Pagoda was built in 707 AD during the reign of the Tang Dynasty. It has 15 floors and starts reducing in size from the 6th to the 15th floors giving it a spiral shape. The semicircular base helped the structure to withstand the earthquake of 1487. Despite the magnitude of the earthquake, the stress was distributed equally to prevent the collapse of the structure. The earthquake caused cracks in the building which were covered by a subsequent earthquake. This phenomenon was called Magic Healing by the local people.

The Small Wild Goose Pagoda is made of bricks with eaves on each story. The lintels have intricately carved figures of Arhats and grasses. Each floor has a wooden floor and a low roof with windows on the north and south. The interior of the pagoda has a tubular structure. A winding wooden staircase takes visitors to the top floor. The Small Wild Goose Pagoda is one of the last remaining monuments from Chang An, the name of the city of Xian during the reign of the Tang Dynasty.
Image by Zossolino on Wikimedia under Creative Commons License.

Situated at the one end of the historical Silk Road, Xian for centuries has been a melting pot of different cultures and faiths, seeing traders from all parts of Asia come to do business. Many foreigners eventually settled here, bringing along their cuisine, customs and religious practices.

Hence the number of pagodas, Buddhist and Taoist temples, as well as mosques found in Xian, some of...  view more

Xian is the former starting point of the ancient Silk Road. It was here that foreign traders came to do business and procure local goods, like Chinese tea, silk and porcelain - all were much sought after internationally, for centuries.

Although the commercial center in China has moved to its coastline in recent years, Xian is still an amazing place where you can do some quality shopping,...  view more