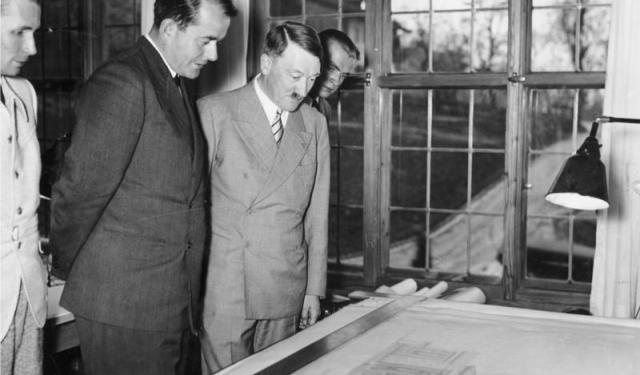 The town of Linz went down in history as the place where Adolf Hitler spent his early years, from 1898 to 1907. The Hitler family moved here when he was just a little boy, and for the rest of his life Adolf Hitler considered Linz to be his hometown. He loved this place, declaring Linz “Führerstadt” (the Führer city) in 1937, and even envisioned extensive architectural plans of turning it into a main cultural center of the Third Reich, eclipsing Vienna – the city he hated.

Having completed elementary education in the nearby town of Leonding, young Adolf was enrolled in Linz's Realschule (secondary school) where he had studied, with little success though, until 1904. Finally, he had to leave due to underachievement.

At the age of 15, Hitler underwent the ceremony of Confirmation and was anointed as a Catholic in the local Alter Dom (Old Cathedral); later he made a drawing of this church, which still exists.

The local medical doctor Eduard Bloch played significant role in the life of the Hitlers, treating them, sometimes free of charge, in view of the family's poor economic situation. For this reason, Hitler, then 18, granted Dr Bloch his "everlasting gratitude" and later, as the Führer of the Third Reich – even protection, despite Bloch's Jewish ethnicity.

As a passionate admirer of theater, Hitler enjoyed performances at Landestheter (State Theatre), particularly the oeuvre of Richard Wagner.

Shortly after the Anschluss of Austria by Germany, in March 1938, Adolf Hitler returned to Linz to proclaim the Grossdeutsches Reich (Greater German Reich) from the balcony of the local Rathaus (City Hall).

If you love history, you may want to take this self-guided walk and visit the locations associated with Hitler in Linz, predating his becoming the bloodiest dictator the humanity has ever seen.
Image Courtesy of Wikimedia and Heinrich Hoffmann.
How it works: Download the app "GPSmyCity: Walks in 1K+ Cities" from iTunes App Store or Google Play to your mobile phone or tablet. The app turns your mobile device into a personal tour guide and its built-in GPS navigation functions guide you from one tour stop to next. The app works offline, so no data plan is needed when traveling abroad.

The Alter Dom (Old Cathedral), also known as the Ignatiuskirche (Ignatius Church) or the Jesuitenkirche (Jesuit Church), is the former Cathedral of the Diocese of Linz. This single-nave Baroque-style temple, with lateral chapels and galleries and a closed choir, was built between 1669 and 1678 (some say 1683). It was originally consecrated to Ignatius Loyola, founder of the Jesuit order.

The exact architect is unknown, although some experts attribute the design to Pietro Francesco Carlone in collaboration with Carlo Antonio Carlone. Initially, the cathedral was a Jesuit church. After the Jesuit order was abolished in 1773, the temple stood empty for a while. From 1785 to 1909 it had served as the cathedral of the Diocese of Linz, and has since been called the Alter Dom.

In between 1856 and 1868, the famous Austrian composer Anton Bruckner served here as an organist. Bruckner's organ – gradually adapted to his sound ideas – is an outstanding instrument. Even after moving to Vienna, Bruckner often returned to Linz to improvise on it.

Another notable figure associated with Linz's Old Cathedral is Adolf Hitler. At the age of 15 he underwent a ceremony of Confirmation here and was “anointed with Christ” as a Catholic. Later, Hitler had made a drawing of the Alter Dom, which is preserved to this day.

Doctor Eduard Bloch, ethnic Jew, settled in Linz in 1899. Two years later he had opened his own practice, at 12 Landstrasse, and lived here with his family for many years afterwards. The doctor enjoyed great respect from his patients, and was prepared to visit those in need even at night.

His first encounter with Hitler took place in 1904 when Adolf, then a young boy, fell seriously ill in the lungs and was bedridden. Later, however, Dr. Bloch denied having treated Hitler for anything but minor ailments, and described him as neither robust nor sickly. At some point, he even stated that Hitler had never suffered from any illness at all.

Nonetheless, it is a known fact that Dr. Bloch did treat Hitler's mother Klara who was diagnosed with breast cancer and eventually died on December 21, 1907. Because of the family poor economic situation, Dr. Bloch charged the Hitlers minimal fees and sometimes even waived them completely – for which Adolf, then 18, granted him his "everlasting gratitude".

In 1938, following Germany's Anschluss of Austria, Dr. Bloch lost his practice and was forced to close the office. Out of despair, the old doctor then resorted to writing a few letters to his former patient, which, for the goodwill of faith, did reach Adolf Hitler. As an act of exceptional attitude, Führer ordered the Gestapo (Secret State Police of Nazi Germany) to protect Dr. Bloch, his family, and all his possessions.

Dr. Bloch with the relatives emigrated to the U.S. in 1940, where he died five years later. In his memoirs, the doctor characterized Adolf Hitler as an extremely polite and educated young man, who loved his mother dearly and who was idolized by her in return.

The peach-color hotel building at 6 Steingasse in Linz is the former Realschule (secondary school). Unassuming as such, other than for a pretty lobby behind the glass entrance, this ex-educational institution would hardly earn a place in history if it hadn't been for one of its students.

In September 1900 Hitler's father Alois, ignoring his son's desire to attend a classical high school and become an artist, sent Adolf here to continue his studies. The young boy had spent an hour every day walking 5 km to the new school before his family finally moved to the city. Hitler rebelled against his father's decision, and later, in his book Mein Kampf stated that he had intentionally done badly at the technical school, hoping that once his father saw whatever little progress he was making, he would let him devote himself to his passion – painting.

Adolf made no effort to adapt and paid decreasingly little attention to studies, resulting in low grades and multiple order marks. Despite this, he enjoyed reading and made good use of the school's big library. Within a period of 1902-1903, Adolf Hitler was the only pupil in the class exempted from tuition fees due to his family's dire financial situation.

Most teachers at the Realschule supported German nationalist ideas, much as the vast majority of German-speaking students. In 1904, a year after his father's death, young Adolf, whose performance by then had further deteriorated, finally left the school.
Image Courtesy of Wikimedia and Dieringer63.
4

While in Linz, Adolf Hitler developed a strong passion for classical music and opera thanks to the numerous visits, together with his mother and sister, to the local theater at 31 Gumboldstrasse. Back then, the Landestheater had a rather diverse repertoire, including Mozart, Schiller, Strauss, and Wagner.

Standing room tickets were fairly cheap and the Hitlers could afford periodic visits to the shows. Adolf particularly enjoyed the oeuvre of Richard Wagner (his favorite composer) and notably the Lohengrin opera. Some of the Landestheater's performances had such a profound effect on sixteen-year-old Hitler that he, back home, would march in his room for hours afterwards, singing and bursting with emotions and ideas. At that time, young Adolf had even made some sketches of a new design for the Landestheater building.

While in the standing box, in 1905, young Hitler met his friend August Kubizek, the future musical conductor. Coevals, the two men had much in common. Kubizek’s father also approved of the new friend of his son's – describing him as mannerly and gentleman-like.

In 1938, a special commission, charged with drafting Hitler's biography for the NSDAP (Nazi Party) archives, noted that during the early 1900s most actors in the Landestheater troupe were Jews.
Image Courtesy of Wikimedia and Andreas Praefcke.
5

The Altes Rathaus (Old Town Hall) is one of the key sights of Linz, located on the east side of Hauptplatz (Main Square).

Like many of the buildings in Linz's Rathausviertel (Town Hall District) and Altstadtviertel (Old Town District), this building has an arcaded courtyard. The Old Town Hall in its current form was designed by Master Christoph after the town fire of 1509. In 1658/1659 it was extended and received today's baroque facade.

During the Anschluss (annexation) of Austria by Nazi Germany in March 1938, Adolf Hitler, greeted with jubilation by locals in the city of his youth, announced from the balcony of the Rathaus the emergence of the so-called Grossdeutsches Reich (Greater German Reich). Thereupon, the German Reich Chancellor gave his first speech on Austrian soil that was frequently disrupted by thunders of applause from the audience below.

Today, the Old Town Hall is the seat of the mayor and the municipal council; it also contains the Tourist Bureau and the Linz Museum for the History of Dentistry.
Image Courtesy of Wikimedia and Stadtkommunikation Linz.
6

The Nibelungen Bridge in Linz marks the spot of its wooden predecessor that had stood here since 1497.

In 1869 the construction of a new iron bridge got underway replacing the demolished old bridge, which was completed in 1872. It was soon noticed, however, that the new overpass was a bit too narrow to cope with the growing pedestrian and carriage traffic. Still, plans for its modification could not be implemented until many years later.

The desire for a new bridge was also shared by young Adolf Hitler, who grew up in the nearby town of Leonding and occasionally attended school in Linz. Preserved sketches by Hitler reveal that he had already had concrete ideas for a new bridge in 1925. After the so-called Anschluss in March 1938, Hitler took personal charge of Linz, declaring it one of the Führer cities, determined to transform it into an economic and cultural hub.

Pursuant to the expansionist "Führerstadt Linz" plan, the engineer Karl Schaechterle and the architect Friedrich Tamms were charged designing of a new Linz Danube bridge to replace the old one. The project was approved in the summer of 1938 and construction began in September of the same year. In 1940 the bridge was finished.

While the exact origin of the name "Nibelungen" is unclear, there are some speculations about the unspecified "fathers of the bridge" associated with the heroic Nibelungen saga involving mythical Germanic figures of Kriemhild and her brothers who reportedly once set foot on the land of present-day Linz.

The huge equestrian statues of the Nibelung characters, meant to adorn the bridge – commissioned by Adolf Hitler, were never completed because of the war. Only two 1:1 plaster models thereof had been placed on the bridge for a few months.
Image Courtesy of Wikimedia and Otto Normalverbraucher.
Sight description based on Wikipedia.

The Romans called it Lentia. It was, from its founding, a Roman city. Straddling the River Danube, it connected vital trading routes to Poland, Bohemia and Italy.

In 799 Count Gerald, Prefect of Ostland and Charlemagne's brother-in-law, obtained tenure of Saint Martin's Church with its fortified "castrum." The location is described for the first time as "Linz." In...  view more