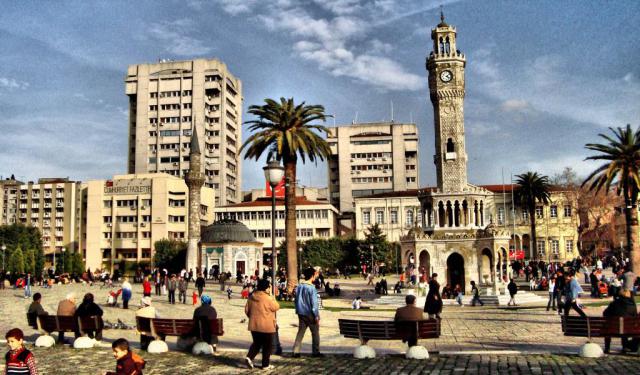 Image by Joe Taylor on Flickr under Creative Commons License.

Izmir, back in the ancient times known as Smyrna, has changed many hands – Greek and Roman – prior to becoming part of Turkey. As a major city port on the Aegean coast, Izmir has seen a lot throughout its history, much of which has found reflection in the local sights. The most prominent of them is, undoubtedly, the open-air museum Agora. To explore this and other attractions of Izmir, follow this orientation walk.
How it works: Download the app "GPSmyCity: Walks in 1K+ Cities" from iTunes App Store or Google Play to your mobile phone or tablet. The app turns your mobile device into a personal tour guide and its built-in GPS navigation functions guide you from one tour stop to next. The app works offline, so no data plan is needed when traveling abroad.

Izmir Gündoğdu Meydanı is a very important square in Izmir. It is located within the Alsancak district and consequently many of the city events, concerts, rallies and other public celebrations are held at the venue. It is also a very beautiful place on the bank of the sea.
Image by Olgunkin on Wikimedia under Creative Commons License.
2

Kıbrıs Şehitleri Street is a popular attraction for visitors looking to walk the pedestrian avenue and enjoy the colorful shopping experience. Along with the shopping opportunities, Kıbrıs Şehitleri also provides restaurants, bars and very interesting architecture. Turkish bookshops, fashion boutiques and souvenir street retailers are also very popular along this strip.
Image by Augapfel on Flickr under Creative Commons License.
3

Kulturpark is a very popular and important tourist attraction, but is also heavily regarded among the locals. The park is very large and contains beautiful views of plants and flowers. Kulturpark also provides a museum, the Atatürk Open-Air Theatre, İsmet İnönü Art Centre, zoo as well as an area for children's entertainment.
Image by Vikimach on Wikimedia under Creative Commons License.
5

5) Izmir Museum of History and Art (must see)

Izmir Museum of History and Art was established in 2004 within the Kulturpark. The museum displays artifacts that were found either in Izmir or in the immediate surroundings. The museum is contained in three separate buildings, each specializing in a different work of art (stone, ceramics, precious artifacts, etc).
Image by TURCOLIVE on Flickr under Creative Commons License.
6

Saint Polycarp Church is a very important tourist attraction and a place of pilgrimage for Catholics. The church is also one of the oldest in the city as it was built in 1625. Since that time, Saint Polycarp Church has been renovated several times, mostly due to destruction from earthquakes and fires. The church was dedicated to Saint Polycarp, Bishop of Smyrna as well as a very important martyr of the Catholic Church.
Image by P. Vasiliadis on Wikimedia under Creative Commons License.
7

Pasaport Quay is an historic and beautiful walking area alongside the water bank of Izmir's port. It's a very pleasant place, with a plethora of very popular cafés, restaurants and nightclubs. Also, if you visit Pasaport Quay during the evening, you'll likely encounter live music performed directly on the streets.
Image by Dario Moreno on Wikimedia under Creative Commons License.
8

Konak Pier was designed by Gustave Eiffel in 1890, within the boundaries of the central metropolitan district of Konak, near the city's historic center Konak Square. It was originally built as warehouse together with the French customs house on the nearby Pasaport Quay during the renewal of Izmir's portuary infrastructures as of 1867. Since then, it became one of the landmarks of Izmir. There are plans to extend Konak Pier compound to include a large marina once suitable adjacent space is made available.
Image by B.güzin35 on Wikimedia under Creative Commons License.
Sight description based on wikipedia
9

Kizlaragasi Han Bazaar is one of the most popular Izmir attractions. Located in a grand covered pavilion, Kizlaragasi is absolutely fantastic and a must-visit. The market combines the traditional open air Turkish bazaar along with a wide number of shopping selections. Here you can invest outstanding carpets and jewelry.
Image by HALUK COMERTEL on Wikimedia under Creative Commons License.
10

Hisar Mosque is truly a magnificent sight and for good reason. Hisar is believed to be the oldest and biggest mosque in Izmir. The gorgeous structure was built by Yakup Bey in 1592 and has been renovated several times since. The mosque features a central dome, amazing ornaments and decorations as well as a very beautiful courtyard with several domes surrounding it. All in all, Hisar shares the classical features of an Ottoman mosque.
Image by Mr. Vehbi Moğol on Wikimedia under Creative Commons License.
11

Kemeralti Market is an old bazaar that was established back in the 17th century, located along the curve of historic Anafartalar Street. Today, Kemeralti is easily one of the most favorite venues for shopping not only for locals but also for tourists. The plethora of shops offer local handcrafts, jewelry, pottery, clothes as well as many other valuable goods.
Image by Ben Welle on Flickr under Creative Commons License.
12

Synagogue Street (Havra Sokagi) is a very popular tourist attraction in Izmir as it used to be one of the most popular places for locals to buy their fruit, vegetables, meat and other products. While not quite the same, Synagogue is still a very popular market. The name of the street derived from the high volume of synagogues formerly built on the street.
Image by The Blue Indian on Flickr under Creative Commons License.
13

Situated on the northern slopes of the Pagos hills, Agora was the commercial, judicial and political nucleus of the ancient city and is now the center for artistic activities and for teaching. Izmir Agora Open Air Museum consists of five parts, including the agora area, the base of the northern basilica gate, the stoa and the ancient shopping centre. The agora of Smyrna was built during the Hellenistic era. After a destructive earthquake in 178 AD, Smyrna was rebuilt in the Roman period, according to an urban plan drawn by Hippodamos. It was constructed on a sloping terrain in three floors, close to the city center. The terrain is 165 m wide and 200 m long. It is bordered on all sides by porticos. Because a Byzantine and later an Ottoman cemetery were located over the ruins of the agora, it was preserved from modern constructions. This agora is now the largest and the best preserved among Ionian agoras.
Image by Panegyrics of Granovetter on Flickr under Creative Commons License.
Sight description based on wikipedia

Izmir is one of the most popular tourist destinations in Turkey. This is widely due to the number of attractions as well as the diversity of the city. Karataş is an especially popular neighborhood in Izmir and one that provides several outlets near the waterfront as well as close to the downtown.