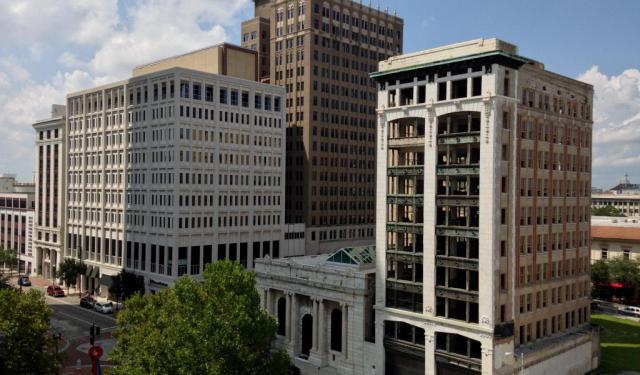 Image by jmd41280 on Flickr under Creative Commons License.

Jacksonville is a poplar tourist destination in Florida. The Southern Bank neighborhoods of the city are well packed with modern architecture, interesting attractions, exciting museums and galleries. Take this walking tour to check out the most popular tourist spots of Southern Jacksonville, including the artsy-trendy San Marco neighborhood.
How it works: Download the app "GPSmyCity: Walks in 1K+ Cities" from iTunes App Store or Google Play to your mobile phone or tablet. The app turns your mobile device into a personal tour guide and its built-in GPS navigation functions guide you from one tour stop to next. The app works offline, so no data plan is needed when traveling abroad.

Friendship Fountain is a large fountain in Jacksonville. It is located in St. Johns River Park (also known as Friendship Fountain Park). The world's largest and tallest fountain when it opened, it has been one of Jacksonville's most recognizable and popular attractions. The fountain and park were designed by Jacksonville architect Taylor Hardwick in 1963 and opened in 1965. The fountain's three pumps could push 17,000 US gallons (64,000 L) of water per minute up to ten stories in height. Friendship Fountain remained one of Jacksonville's signature attractions through the 20th century, but severe corrosion and deterioration to the equipment resulted in periodic closures in the 2000s. In 2011 the city completed a $3.2 million renovation to the fountain and the surrounding park.

Image by djprybyl on Flickr under Creative Commons License.
Sight description based on wikipedia
2

2) Museum of Science & History (must see)


Image by LoneStarMike on Wikimedia under Creative Commons License.
Sight description based on wikipedia
3

The Treaty Oak is an octopus-like Southern live oak in Jacksonville. The tree is estimated to be 250 years old and may be the single oldest living thing in Jacksonville, predating the founding of the city by Isaiah Hart during the 1820s. The name's origin is generally believed to be related to some local apocryphal stories about peace accords between Native Americans and Spanish or American settlers signed under its branches. In reality, the name was created by the Florida Times-Union journalist Pat Moran who, in an attempt to rescue it from destruction by developers, wrote an article in the early 1930s claiming a treaty had been signed at the site by native Floridians and early settlers and called it Treaty Oak. Prior to that, the tree was known simply as Giant Oak.

The tree has a trunk over 25 feet in circumference, it rises to height of 70 feet, and its crown spreads over 145 feet, with twisting branches that bow to the ground and curl back up. The oak shades a roughly circular area, about 190 feet in diameter.

For more than fifty years Reddi-Arts has been a store featuring a large selection of artist supplies and framing services. There is also a lovely art gallery, called Gallery 1037, inside the store. The gallery is working to support and promote young local artists by displaying their works here. Exhibitions include beautiful landscape art, pictures with animals, still life images and lots of other attractive artwork. The gallery is working Monday to Saturday 9:30am – 6pm, Sundays 1pm – 5pm.
Image by rivieragalleryartist on Flickr under Creative Commons License.
5

San Marco Theatre is a historic landmark. Built in 1938, it is a bright example of popular Florida Art Deco style, designed by Roy Benjamin. San Marco was recognized by USA Today as one of 10 best classic cinemas in the USA, as it retained its Art Deco air by reflecting thematic elements of the architecture in the interior and exterior decorations. San Marco Theatre is also a good place to enjoy the latest movies.
Image by Joe Shlabotnik on Flickr under Creative Commons License.
6

The foundation of the Stellers Gallery began in 1985, when Scott Riley decided to support his brother C. Ford Riley's artwork by displaying it for public viewing. The growing demand for a Ford Riley artwork as well as work from other well-known artists insured further development of the gallery. Therefore, in 1992 the gallery was moved to a new place in the historic San Marco district of the city. In a spacious light environment, visitors can admire creative visual expressions in different styles ranging from traditional to abstract and expressionist. There is also a custom framing service available. The gallery is open Monday to Friday from 10:30am to 3pm.
Image by Rob Lee on Flickr under Creative Commons License.
7

Another prominent landmark of the city is the fountain statue “Three Lions” situated in the heart of historic San Marco Square. Since this area of the city is popular for its cafes, restaurants and shops, “Three Lions” is often a meeting spot for both tourists and locals. The statue features three lions climbing on each other with water coming from the top lion figurine. The fountain is surrounded by a pedestrian walking path with traffic bustling around it.
Image by jmd41280 on Flickr under Creative Commons License.

Museums and Galleries of Jacksonville