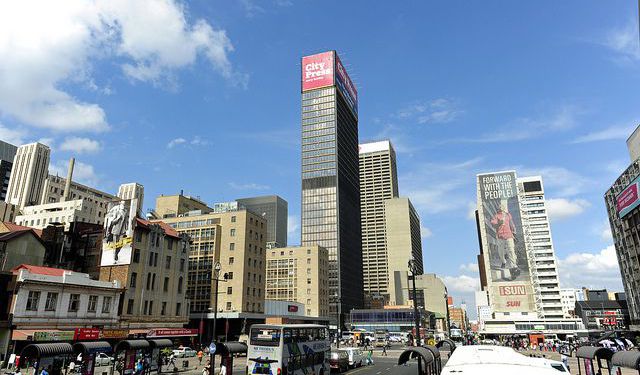 Johannesburg, or Joburg, or "City of Gold", as it is often informally called, is South Africa's largest city. The area's original inhabitants included hunter-gatherers from the San tribes and the Ndebele, a tribe associated with the Zulu. A gold rush in 1884 lead to Johannesburg's founding in 1886. Within a decade, the population had grown to 100,000 inhabitants.

Much of Johannesburg's modern construction occurred during the 1930s through the 1950s. The apartheid racial segregation system in place from 1948 saw opposition during the 1960s through 1980s that led to the dismantling of the apartheid system. Today, much of Johannesburg's inner-city area is a hub for the arts and shopping, dining, and entertainment.

Visitors interested in immersing themselves in local history will want to see The Old Fort complex, a former high-security prison going back to 1892. Johannesburg City Hall is an Edwardian Baroque building constructed between 1910 and 1914. Ansteys Tower, which dates to 1937, has an impressive Art Deco style.

Gandhi Square is a booming area of the city featuring a plaza with numerous shops and a statue commemorating Mahatma Gandhi. Joubert Park, the city's oldest park, is host to a mud building designed to demonstrate sustainable construction practices. The Johannesburg Art Gallery falls within the confines of this park, highlighting contemporary works from African artists and Dutch, British, and other European paintings spanning the 17th through 19th centuries.

This self-guided walking tour is an excellent way to get to know Johannesburg's history and most popular attractions.
Image Courtesy of Flickr and South African Tourism.
How it works: Download the app "GPSmyCity: Walks in 1K+ Cities" from iTunes App Store or Google Play to your mobile phone or tablet. The app turns your mobile device into a personal tour guide and its built-in GPS navigation functions guide you from one tour stop to next. The app works offline, so no data plan is needed when traveling abroad.

Gandhi had legal offices at the corner of Anderson and Rissik. During much of the 20th century, the square fell into a state of disrepair, leading to an extensive project that began in the 1990s and finished in 2002. The developer spent 2 million Rand to complete this project.

One of the outcomes of the project was to allow for new shops to open along the square. Today, the square is a broad, open plaza that is a perfect place to enjoy the relaxing atmosphere. A statue of Gandhi is also present here that visitors will enjoy taking photos of.

Johannesburg City Hall was constructed between 1910 and 1914. This building has enjoyed National Monument status since 1979. The style is known as Edwardian Baroque, with distinctive features like a neo-Renaissance half-dome entrance and a portico featuring Ionic columns. A two-half design places the Town Hall and municipal offices on opposite sides.

There is a paved square in front of the main entrance, with obelisks and a fountain. Visitors will appreciate the collection of mosaics and the marble used to decorate the vestibule. Two staircases lead up to the gallery area.

The Town Hall area features decorative gilding, plaster, and woodwork that are still impressive to see. One of the highlights of this area is a Norman & Beard of Norwich-built pipe organ that was used for recitals during the 1920s. This organ once enjoyed status as the largest organ in Africa and the second-largest organ in the Southern Hemisphere.

Ansteys Tower is a historic gem amongst the modern skyscrapers of Johannesburg’s Central Business District, known locally as Newtown. Opened in 1937, it is an 82 metre high, asymmetrical art deco construction. The stone clad frontage has a cubist element, resembling an abstract stack of bricks. It is named after Norman Anstey, the owner of an elegant department store which once occupied the first four floors of the building. Anstey’s was renowned for its elaborate window dressings, seen through plate glass shop frontages. Whilst the store has now closed, many of the fittings still remain, including floor to ceiling mirrors and brass shop fittings.

The building was the tallest in Africa when it was first opened, and is now a National Monument, meaning that its architectural features are protected by the government. In addition to its aesthetic value, the tower has also played a part in the troubled history of South Africa. The residential portion of the building was once home to Cecil Williams, an actor, playwright and a member of Umkhonto we Sizwe – the radical wing of the African National Congress (ANC) political party. Nelson Mandela was also a member, and it was whilst posing as Williams’ driver in 1962 that he was captured and imprisoned.
Image Courtesy of Wikimedia and PZFUN.
4

Johannesburg Art Gallery is located in Joubert Park in the city's central business district. It is the largest gallery on the subcontinent with a collection that is larger than that of the Iziko South African National Art Gallery in Cape Town. The building was designed by Sir Edwin Lutyens and consists of 15 exhibition halls and sculpture gardens. It houses collections of 17th-century Dutch paintings, 18th- and 19th-century British and European art, 19th-century South African works, a large contemporary collection of 20th-century local and international art, and a print cabinet containing works from the 15th century to the present.

Tip:
The place is filled with wonderful art and talents but the environment around it is not so safe.

Joubert Park is the Johannesburg Central Business District's largest park. Some of the highlights of the park include beautiful landscaping and a peaceful atmosphere that attracts visitors of all ages to enjoy the relaxing setting. An informal chess club likes to gather here, and visitors enjoy watching the members at work.

As the city's oldest park, this area has seen a lot of changes over the years. As many as 20,000 people head to the park every month, making it one of the city's most popular hangouts. One of the park's major highlights is that it is host to the Johannesburg Art Gallery, which has been around since 1910.

The big TV screens host movies and other types of entertainment. In addition to the art gallery, the Victorian Conservatory is worth seeing. Another exciting highlight is the two-story building constructed from mud, serving as an example of sustainable construction.
Image Courtesy of Flickr and flowcomm.
6

The Old Fort complex began in 1892 when a high-security prison was built to house white male prisoners. In 1896, Paul Kruger, then president of the South African Republic, decided to build a fort around this prison to protect the country from the threat of British invasion. In later years, the fort was also used as a prison. Ironically, it was at this place where the Boer military leaders of the Anglo-Boer War were imprisoned by the British.

The Old Fort prison complex was later extended to include "native" cells, called Section 4 and Section 5, and, in 1907, a women's section was added. An awaiting-trial block was constructed in the 1920s. Both political activists opposed to apartheid and common criminals were held at the prison. Mahatma Gandhi was imprisoned here in 1906, and striking white mineworkers in 1907, 1913 and 1922.

Tips:
You can go into the cells, see and touch. There are signs everywhere in English to give you more information, as well as an orientation film to start. There is also an exhibition on Mandela and Gandhi.

Go for the guided tour. You'll get so much more out of it (and it's only a few dollars extra)!

Johannesburg was established in 1886 following the discovery of gold on what used to be a farmland. Since then the city has developed into an economic powerhouse in Africa.

While most of its early buildings adopted the architectural styles from its colonial parent, the British Empire, some of them were emulating the prowess of New York City. Joburg's Central Business District is...  view more