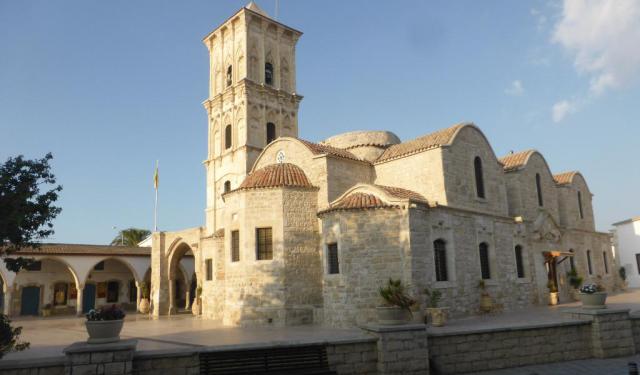 Image by Andrew Bone on Flickr under Creative Commons License.

Founded by the Phoenicians on the south coast of Cyprus, today Larnaca is known primarily as a major leisure spot with a cute palm-lined seaside promenade. Historically though, it is famous for housing the 9th-century Church of Saint Lazarus containing the tomb of the saint that was once risen from the dead by Jesus himself. These and other religious and secular sights are made part of the Larnaca orientation walk that provide insight into the city's eventful past.
How it works: Download the app "GPSmyCity: Walks in 1K+ Cities" from iTunes App Store or Google Play to your mobile phone or tablet. The app turns your mobile device into a personal tour guide and its built-in GPS navigation functions guide you from one tour stop to next. The app works offline, so no data plan is needed when traveling abroad.

Located just near the Larnaca's heart bay, Larnaca Marina is the beauty opposite Phinikoudes Promenade. The Marina is actually an official port, home to about 450 yachts. The Marina offers a variety of services, such as renting a boat or just taking a walk by the sea. The Marina is entirely protected from all types of weather conditions and is a great place to get familiar with Larnaca's sailing culture.
Image by Leonid Mamchenkov on Flickr under Creative Commons License.
2

2) Municipal Museum of Paleontology (must see)

The Pierides Museum is the property of the Pierides Archaeological Foundation Museum. The museum is dedicated to all the works that initially belonged to Dimitris Pierides, who began to collect Cypriot art works, pottery and artifacts from tomb raiders in the 1830s. The museum includes rooms that cover the Neolithic and Roman periods, but also Cypriot folk art, Mycenaean pottery and Iron Age relics. Pierides Museum is located in the former house of Dimitris Pierides himself, an elegant mansion built in 1815, in traditional Cyprus Greek style with Turkish influences and features.
Image by vintagedept on Flickr under Creative Commons License.
4

The Bust of Kimon is a monument located on Phinikoudes Promenade. Also known as the Kimon Athenian Monument, it depicts the famous Athenian General Kimon (510 - 449 BCE), watching over the harbour. General Kimon is famous for his victory over Persians in Kition. The Bust of Kimon is one of the most significant historical monuments in Larnaca.
Image by Gaspa on Flickr under Creative Commons License.
5

Larnaca Fort is a famous landmark in Larnaca, which today houses the Medieval Museum. The Fort's existence is said to have begun in 1380 A.D. as a prison, during early British rule. In 1625 A.D., the Fort underwent renovation. The second floor of the Fort is home to the Medieval Museum. They preserved artifacts from the Hala Sultan Tekke area, as well as from the ruins of Kitium. Larnaca Fort also offers a beautiful view of the coastline.
Image by Chris Pieri on Flickr under Creative Commons License.
6

Located near Larnaca Fort, the Buyuk Mosque, the Grand Mosque, is considered the first Ottoman Mosque in Larnaca. Built approximately in the 13th or 14th century, the mosque was initiated as a Catholic church dedicated to Santa Katerina. The oldest date that is mentioned for the existence of the mosque is found in a 1747 document in which Bekir Pasha, the founder of the Kamares aqueduct, said that in front of the mosque there was a fountain that had to be provided with water from the Kamares acqueduct.
Image by Ranoush. on Flickr under Creative Commons License.
7

7) Church of Saint Lazarus (must see)

The Church of Saint Lazarus, is a late-9th century church in Larnaca. It belongs to the Church of Cyprus, an autocephalous Greek Orthodox Church. The church is an elongated building measuring 31.5 x 14.5 m with a tripartite sanctuary, semicircular apses internally and three-sided externally and a five-sided apse in the center. The interior structure of the church is divided into three aisles with bulky double pillars and arched openings going through them. These pillars bear the weight of the domes thus forming the central aisle while the north and south aisles bear a semi-cylindrical roof, intersected by cross-vaults.

The stonework of the church consists mainly of square limestone block about a meter in thickness. The church has an open porch, from which steps descend into the church. Under Frankish and Venetian rule (the 13th to 16th centuries), the church became Roman Catholic. A stone covered portico (stoa) of Gothic style was added on its south side during this time.

Image by Marcobadotti on Wikimedia under Creative Commons License.
Sight description based on wikipedia

Create Your Own Walk in Larnaca

Creating your own self-guided walk in Larnaca is easy and fun. Choose the city attractions that you want to see and a walk route map will be created just for you. You can even set your hotel as the start point of the walk.

Larnaca Salt Lake is considered the city's treasure as it is surrounded by some of the greatest historical spots of the city, such as the Hala Sultan Tekke, the old aqueduct called Kamares and Agios Georgios Makris Church. Salt Lake itself is also a great landmark as it is home to a variety of flying beauties. There are also some lovely green zones in Larnaca; there you can discover Larnaca...  view more