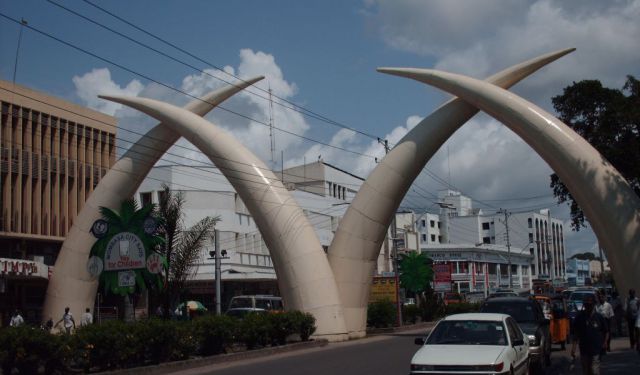 Kenya's second-largest city Mombasa is a bustling metropolis and a major regional cultural and economic hub. Owing to its strategic location on the country's east coast, facing the Indian ocean, Mombasa enjoys steady influx of visitors as both, a seaport and tourist destination. The most notable local landmarks include the famous "Tusks", Swaminarayan Temple, Jain Temple, Fort Jesus and Old Harbor. To learn more about these and other popular locations of Mombasa, follow this orientation walk.
Image Courtesy of Wikimedia and Sandro Senn.
How it works: Download the app "GPSmyCity: Walks in 1K+ Cities" from iTunes App Store or Google Play to your mobile phone or tablet. The app turns your mobile device into a personal tour guide and its built-in GPS navigation functions guide you from one tour stop to next. The app works offline, so no data plan is needed when traveling abroad.

Constructed to mark a visit by Britain’s Queen Elizabeth, the “Tusks” are the most amazing landmark in Mombasa. These tusks of ivory are an impressive sight by themselves. Most amazingly, their shape creates a letter “M” that makes for a brilliant place marker at the edge of Mombasa.
Image Courtesy of Flickr and neate photos.
2

The Shree Cutch Satsang Swaminarayan Temple, to give its full name, is one of the most magnificent examples of Hindu architecture in Kenya. Tourists from all over the world come here to experience its beauty. Inside, you can see the temple that in large part forms the way of life of the city people from a Gujarati background.
Image Courtesy of Wikimedia and AroundTheGlobe.
3

If you are looking for some shade on a hot African day, there’s nowhere more picturesque in the center of the town than Makadara Garden. Here you can admire all the beautiful, exotic flora, including rare African plants that cannot be found almost anywhere else on Earth.
Image Courtesy of Flickr and mwanasimba.
4

The Jain Temple is both a religious and a historic sight of Mombasa. This beautiful white edifice is decorated with numerous amazing figurines and sculptures. Members of the Jain community from all over the world come here to pray. Of course, any visitor who comes here can admire this magnificent building, no matter what their faith is.
Image Courtesy of Flickr and mirek.ambroz.
5

Chances are you’ll taste a delicious local dish during your stay in Mombasa. If you want to recreate that tasty meal at home, you can pick up the spices you need at the Market Hall. Here you can buy all kinds of cooking spices from all over the continent and any other ingredient you may need.
Image Courtesy of Wikimedia and Matthias Krämer.
6

Biashara Street is a delightful part of the city where you can interact with the locals as you browse the many tailor shops along the street. These skillful tailors can make you traditional African clothes while you wait, such as a kanga for women and a kikoi for men.
Image Courtesy of Flickr and Bev Trayner.
7

If you want to get fitted out with a top quality suit made to order, Mombasa’s Nehru Road is a great cheap option. Here a number of different highly skilled tailors can make you a suit in no time. Alternatively, you can get African shirts or other traditional clothing items that have a bright, colorful and exotic style.
Image Courtesy of Flickr and frerieke.
8

The Lord Shiva Temple is a beautiful Hindu edifice that offers much to admire in its architecture, including a gold spire on its roof. There are also impressive lion statues standing guard outside the temple entrance. This temple is also a symbol of the religious and cultural diversity of the city.
Image Courtesy of Wikimedia and Yann Forget.
9

The Mombasa Memorial Cathedral is an Anglican Church that dates from British colonial times. Interestingly, the church has a similar appearance to that of the many mosques in the city, because it was designed to blend in with the local architecture. This white-colored church has arches and a silver-colored dome.
Image Courtesy of Wikimedia and Zahra Abdulmajid.
10

Treasury Square is the administrative heart of Mombasa, where you will find all the best colonial style architecture of the city. Look out for the historic town hall in this area. You can also visit the Treasury Square garden, which is full of amazing exotic plants and trees.
Image Courtesy of Wikimedia and Joe.
11

Fort Jesus is a Portuguese fort built in 1593 by order of King Philip I of Portugal, located on Mombasa Island to guard the Old Port of Mombasa. It was built in the shape of a man (viewed from the air), and was given the name of Jesus. In 2011, the fort was declared a World Heritage Site by UNESCO, highlighted as one of the most outstanding and well preserved examples of 16th century Portuguese military fortifications. Between 1631 and 1875 the fort was won and lost nine times by the nations contesting control of Mombasa. It was declared a historical monument in 1958.

The fort was designed by a Milanese architect, Giovanni Battista Cairati, who was the Chief Architect for Portuguese possessions in the East. It was the first European-style fort constructed outside of Europe designed to resist cannon fire. The fort quickly became a vital possession for anyone with the intention of controlling Mombasa Island or the surrounding areas of trade. When the British colonized Kenya, they used it as a prison, until 1958, when they converted it into a historical monument. The architecture of the fort represents the rough outline of a person lying on their back, with the head towards the sea. The height of the walls is 18 meters. The fort combines Portuguese, Arab and British elements, representing the major powers that held it at different times in history.

Image Courtesy of Wikimedia and Matthias Krämer.
Sight description based on Wikipedia.
12

The old harbor area forms the oldest part of the city of Mombasa. It was here that Arab settlers first built the narrow streets and beautiful Arab-style homes that still grace the district to this day. It was also the area where the Portuguese entered the town, to be met by locals with poison arrows. Still a functioning harbor, this busy spot offers great panoramic views of the city as well as very pretty sunsets.
Image Courtesy of Flickr and mashleymorgan.

Create Your Own Walk in Mombasa

Creating your own self-guided walk in Mombasa is easy and fun. Choose the city attractions that you want to see and a walk route map will be created just for you. You can even set your hotel as the start point of the walk.

Mombasa is the best place in Kenya for souvenirs, because most of the country’s unique handicrafts are made right here in the city. You can get many amazing African art pieces, handmade jewelry and home decorations like captivating wooden statues. Take our tour to find the best shopping spots in the city, from the beach to the Old Town district.

Mombasa has a strong Arab influence, a fact which is reflected in the great number of old mosques in this Kenyan city. But here you’ll also find many Hindu temples and Christian churches that have been established over time. Take our self-guided tour to explore the religious life of the city.