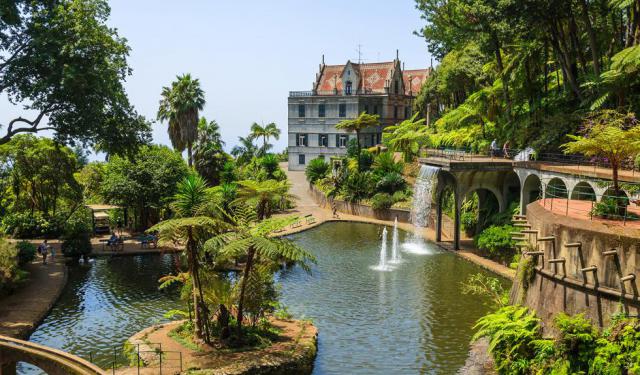 Monte is a spectacular green area of Funchal, and also the favored destination of the island’s first tourists, who stopped en route to and from Africa and the Americas. Getting to and from Monte is half the fun: up on the cable car and down on an exhilarating dry toboggan run. The attractive hilltop area of Monte is 550 meters above sea level and is a six kilometer climb northeast of Funchal. Take this self-guided tour to enjoy its wooded slopes, cool places and the fantastic views.

Operation Hours: Monday - Sunday: 10 am - 4.30 pm
Image Courtesy of Flickr and Tom Chapman.
How it works: Download the app "GPSmyCity: Walks in 1K+ Cities" from iTunes App Store or Google Play to your mobile phone or tablet. The app turns your mobile device into a personal tour guide and its built-in GPS navigation functions guide you from one tour stop to next. The app works offline, so no data plan is needed when traveling abroad.

Joao Goncalves Zarco was one of the adventurers who discovered the archipelago of Madeira. In 1420, he commissioned what was to be the first chapel on the island of Madeira, Our lady of the Conception, also called Our Lady of Calhau. The chapel is located in the center of the town of Camara de Lobos on the Bay.

Restorations were done on the chapel in 1773 and 1908. The 1908 restoration followed the visit of Pope Pius X, often called "Padre Pio." The Pope celebrated an open-air mass there in 1904.

The church exterior is in a neoclassical style. The interior is baroque with extensive gilding, especially around the altar. The stained glass windows are by Ricardo Leone. There are also paintings by Nicolau Ferrira. On October 21, 1993, the Regional Governor of Madeira declared the Our Lady of Conception Chapel to be a site of Cultural Value.

Monte Palace was once the 18th century private residence of the British Consul Charles Murray. Later it was a hotel and then, in the late 1980s, it was purchased by Jose Bernardo, a retired tobacco magnate. Jose had dreams and fantasies of a magical palace in a place of fountains, grottos, follies, sculptures and mysterious exotic plants.

There are two oriental gardens, one Japanese and one Chinese. The theme of these gardens is the role of Portugal in the Age of Discovery of these nations. Bernardo had visited both these countries. The gardens contain stone lanterns and Buddhas, Shinto gates, pagodas and tiles telling the story of the Portuguese impact in Japan.

Recent tiles, 40 in number, are by Argentinian artist Alberto Cedron. They depict Portuguese history from the early monarchies to the 1974 Revolution. Garden flora include South African cycads and native plants of Madeira: Laurel, dragon trees, mahogany, and Pride of Madeira. There are carps in the ponds, black and white swans, and peacocks.

The museum is on three floors. Two floors are devoted to mostly African sculptures. The third floor holds minerals and precious stones from all over the world. The gardens are open every day from 9:30 am to 6 pm. The Monte Palace can be reached via the exciting Teleferico cable car, which stops in front of the entrance.

Image Courtesy of Wikimedia and Karelj.
3

Museu Monte Palace displays petrified wood, African stone carvings and around a thousand semi-precious stones from around the world. From the entrance, the path descends past koi fish ponds, down a series of steps into the ravine. One path is lined with decorative modern azulejos panels, each showing key moments of Portugal’s history, which is followed by a series showing the rebuilding of the capital.
Image Courtesy of Flickr and Bill Hails.
4

The twin-towered Nossa Senhora do Monte (Our Lady of the Mountain) is the island’s most important church and stands on the site of one of Madeira’s first chapels, built in 1470 by Adam Gonçalves. The church is also the final resting place of Emperor Karl I of Austria and King of Hungary, the last Hapsburg monarch, who was deposed in 1918 at the end of World War I after just two years in power.
Image Courtesy of Wikimedia and Olbertz.
5

The Café do Parque is a café-souvenir shop not far from Capela de Nossa Senhora. It serves light meals, hot and cold drinks, including a fine range of milkshakes. There’s a roof terrace, though the best tables are outside where you can admire the view of the city. The variety of souvenirs available here are at reasonable prices.
Image Courtesy of Wikimedia and Jane White.
6

For most people, the toboggan run (Carros de Cesto) is the most memorable experience to be had in Monte. You’ll see the dapper-looking drivers lined up on the street beneath the church. The toboggans are basically giant wicker baskets, attached to wooden runners, which are oiled using a greasy rag. Rides end up a couple of kilometers downhill in downtown Funchal.
Image Courtesy of Flickr and bonzoWiltsUK.

Create Your Own Walk in Funchal

Creating your own self-guided walk in Funchal is easy and fun. Choose the city attractions that you want to see and a walk route map will be created just for you. You can even set your hotel as the start point of the walk.

In 72 AD, Quintus Sertorius, a Roman general, encountered some sailors in Cadiz. The sailors spoke of two idyllic islands in the Atlantic; the "Isles of the Blessed." Quintus was intrigued, but he had other fish to fry. The islands slipped back into the mists of historic oblivion.

In 1418, Joao Goncalves Zarco and Tristao Vaz Teixeira, while in service to Henry the Navigator, were...  view more