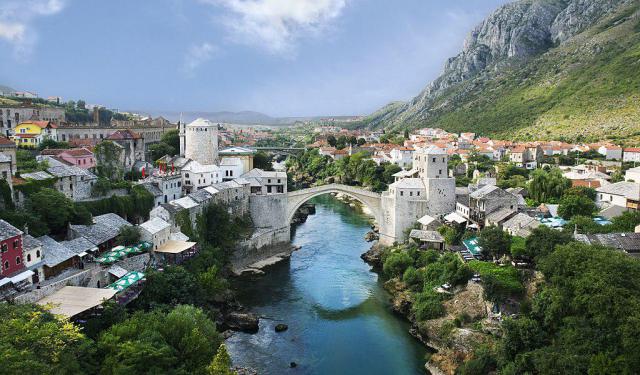 Image by Ramirez on Wikimedia under Creative Commons License.

Mostar is one of the major cities in Bosnia and Herzegovina. The city is filled with a rich history which includes Byzantine and Ottoman origins. Mostar has survived two wars in the past century and has since resurrected from its own ashes, showcasing a city with amazing architectural sites.
How it works: Download the app "GPSmyCity: Walks in 1K+ Cities" from iTunes App Store or Google Play to your mobile phone or tablet. The app turns your mobile device into a personal tour guide and its built-in GPS navigation functions guide you from one tour stop to next. The app works offline, so no data plan is needed when traveling abroad.

1) Catholic Church of St. Peter and St. Paul (must see)

The Catholic Church of Saint Peter and Paul was built in the Ottoman era (19th century), but completely destroyed during the 1990s. The church was rebuilt with a much higher tower and a Franciscan monastery right in front.
Image by j. budissin on Wikimedia under Creative Commons License.
2

The Franciscan Chruch is an old minaret from the medieval time period. The church belonged to the Franciscan Order and was a place of both religious and historical value. Today, it is also a highly visited tour attraction.
Image by currybet on Flickr under Creative Commons License.
3

The construction of this mosque lasted from the 16th to the 17th century, according to the desire of Hajji Kurt, member of the prominent local aristocratic clan. The mosque stands on the right bank of the Neretva River, some 100 meters from the Old Bridge, adjoining the ancient Tabhana district which was once inhabited by leather tanners and contained many of their workshops. Hence the name of the area, deriving from Tabaci which means "leather tanner". Being surrounded by numerous shops, the Tabačica mosque one of the most often visited in Mostar.

The Crooked Bridge is even older than Old Bridge, and dates back to the middle 16th century. The bridge crosses a tributary to the Neretva River. Floords destroyed the bridge in the 1990s, but was also reconstructed by UNESCO in 2001.
Image by Christian Bickel on Wikimedia under Creative Commons License.
5

On either side of the Old Bridge, you'll discover two towers that date back to the age of the Old Bridge. The towers were used to house bridge guardians, armories, and store gunpowder. Today, one of the towers is a mosque and offers an exhibition of Mostar's history and the destruction of the Old Bridge.
Image by Neoneo13 on Wikimedia under Creative Commons License.
6

Stari Most, or Old Bridge, is a 16th century Ottoman bridge that crosses the river Neretva and connects two parts of the city. The Old Bridge stood for 427 years, until it was destroyed on November 9, 1993 during the Croat-Bosniak War. Subsequently, a project was set in motion to reconstruct it, and the rebuilt bridge opened on July 23, 2004.

Stari Most is hump-backed, 4 meters (13 ft 1 in) wide and 30 meters (98 ft 5 in) long, and dominates the river from a height of 24 m (78 ft 9 in). Two fortified towers protect it: the Helebija tower on the northeast and the Tara tower on the southwest, called "the bridge keepers". Instead of foundations, the bridge has abutments of limestone linked to wing walls along the waterside cliffs. The original bridge was commissioned by Suleiman the Magnificent in 1557 to replace an older wooden suspension bridge of dubious stability. Construction began in 1557 and took nine years: according to the inscription the bridge was completed in 974 AH, corresponding to the period between July 19, 1566 and July 7, 1567.

The Old Bridge stood for 427 years, until it was destroyed on 9 November 1993 during the War in Bosnia and Herzegovina. After the end of the war, plans were raised to reconstruct the bridge. In October 1998, UNESCO established an international committee of experts to oversee the design and reconstruction work. Reconstruction commenced on 7 June 2001. The reconstructed bridge was inaugurated on 23 July 2004.

Image by Mhare on Wikimedia under Creative Commons License.
Sight description based on wikipedia
7

The church is a sacred place for Orthodox Christians from the Balkans, as well as a relic of Byzantine architecture. The church was battered during the war, but then reconstructed with a project financed by a British philanthropist.
Image by digipam on Flickr under Creative Commons License.
8

Given the Orthodox Serbian surroundings, an old Catholic church may appear unusual, however this modest Catholic Church has persevered through old age and destruction from the war.
Image by GViciano on Flickr under Creative Commons License.
9

Muslibegović House is a National Monument and a museum located in Mostar, Bosnia and Herzegovina. The monument complex includes a residential building and two courtyards, including the surrounding walls with entrance gateways, and movable property. Some of its most valuable exhibits include the manuscript of the Qur'an made by Sami (a pupil of Hajji Hafiz Muhamed Sevkije), levhas from 1855, and a decorated sabre from 1866. The residential complex of the Muslibegović family, located in Mostar's Brankovac mahala, dates from the second half of the 18th century.

The Muslibegović family house is considered one of the most significant examples of residential architecture of the Ottoman period in Herzegovina. The complex has preserved its original residential use and ownership over the years. Today, the section of a building is used as hotel and it consists of twelve bedrooms.
Image by andys1616 on Flickr under Creative Commons License.
Sight description based on wikipedia
10

Karadjoz-Beg (Karađozbey) Mosque in the town of Mostar is the largest mosque in Herzegovina. Designed by Turkish architect Koca Mimar Sinan, it was built in 1557. Similarly to other local mosques, Karadjoz-Beg has suffered great damage from wars fought in the region, including WWII and the recent Serbian invasion of Bosnia-Herzegovina during which it was almost totally destroyed. After a long restoration, the mosque once again serves the community. Situated slightly away from the downtown area, Karadjoz-Beg is one of the greatest monuments of the 16th century Islamic religious architecture, grand with interior decorations: arabesques and phytomorphic drawings. In line with the period tradition, it is flanked by several buildings in the courtyard: a fountain for washing (sadrvan), an Islamic school (madrasa), a library and a public canteen for the poor. Behind the mosque is a Muslim cemetery, oldest in Mostar.
Image by visitmostar on Wikimedia under Creative Commons License.