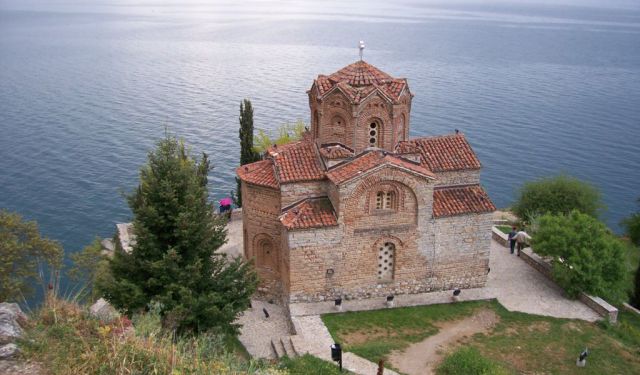 There is a legend supported by observations by Ottoman traveller Evlia Celebia, from the 15th century, that there were 365 chapels within the town of Ohrid's boundaries, one for every day of the year. Today this number is significantly smaller. However during Medieval times, Ohrid was called Slavic Jerusalem
Image Courtesy of Wikimedia and Vanjagenije.
How it works: Download the app "GPSmyCity: Walks in 1K+ Cities" from iTunes App Store or Google Play to your mobile phone or tablet. The app turns your mobile device into a personal tour guide and its built-in GPS navigation functions guide you from one tour stop to next. The app works offline, so no data plan is needed when traveling abroad.

The Haji Turgut Mosque was built in 1466 by the Turkish Empire and is believed to be the oldest mosque in town. It was built on the former site of the St. Kyriakia church. The legend says that the minaret of the mosque had collapsed several times until the Turks left the original cross on the top of the building.
Image Courtesy of Flickr and Zé Valdi.
2

The Zeynel Abedin-Pasha Mosque was built in the seveteenth century by Zeynel Abedin-Pasha as a monastery of the Halveti Order. Nowadays the mosque contains a burial chamber in which rest the remains of Haji Muhammad Hayati, a Persian ancestor of the first ruler of Ohrid.
Image Courtesy of Wikimedia and Alboholic.
3

The church was built and painted in 1295. Dedicated to the Virgin Mary, Perivlepta is an attribute given to her that means "the Omnisicent and Clairvoyant". The benefactor was Progon Zgur, son-in-law of the Byzantine emperor Andronicus II. The church was painted by Michael and Eutychius. The frescoes they painted have all the elements of Renaissance art except perspective. The figures painted by Michael and Eutychius are not presented the traditional Byzantine way, skinny, emotionless and with their thoughts wandering somewhere. They are presented like healthy, chubby young men with red cheeks. Mihailo and Evtihie are the first Byzantine artists to sign their work (on 20 different hidden locations, look on the front columns of the sword and the cloth of two holy warriors). Their work left a strong impact on Byzantine art. 100 denars entrance fee.
Image Courtesy of Flickr and Aleksandar Bondikov.
Sight description based on Wikipedia.
4

The Church of St. Sophia is one of the most important monuments of Macedonia, housing architecture and art from the Middle Ages. It was built during the First Bulgarian Empire, after the official conversion to Christianity. Some sources date the building of the church during the rule of Knyaz Boris I (852 – 889), others during the rule of Tzar Samuel of Bulgaria (997 – 1014).

Originally the synod church of the Archbishopric of Ohrid, it was later converted into a mosque during the rule of the Ottoman Empire. The interior of the church has been preserved with frescoes from the 11th, 12th and 13th century, which represent some of the most significant achievements in Byzantine painting of the time. The main part of the church was built in the 11th century, while external additions were built by Archbishop Grigorie in the 14th century. In November 2009, Macedonian Orthodox Church introduced a new Coat of Arms with church of St. Sophia as a charge on the shield. A detail from the church is depicted on the reverse of the Macedonian 1000 denars banknote, issued in 1996 and 2003.

Image Courtesy of Wikimedia and Petar Milošević.
Sight description based on Wikipedia.
5

This church is located in the proximity of the Lower Gate. There are no historical confirmations reagarding the date of the church’s construction, however, the architecture and design of the interior paintings is very similar to the sixteenth century style. The church bore many renovations throughout its time but nonetheless, has original frescoes within its interior.
Image Courtesy of Wikimedia and Dennis Jarvis.
6

6) The Church of St. Nicholas Bolnicki

The Church of St. Nicholas was built at the very beginning of the fourteenth century. It is located in the proximity of the Lower Gate of Ohrid. The church has a one-naval shape, which is a quite an original architectural design for the Ohrid area. The church has a bell tower and a porch on its western side.
Image Courtesy of Wikimedia and Rašo.
7

Saint John the Theologian, Kaneo, or Saint John at Kaneo, is a Macedonian Orthodox church situated on Kaneo beach overlooking Lake Ohrid. The church is attributed to the author of the Gospel of John, John the Evangelist. The construction date of the church remains unknown but documents detailing the church property suggests that it was built before the year 1447. Archaeologists believe that the church was constructed some time before the rise of the Ottoman Empire very likely in the 13th century.

Restoration work in 1964 led to the discovery of frescoes in its dome. The church was built into the shape of a cruciform with a rectangular base. The architect of the church is unknown but it is believed that he was influenced by the architecture of Armenian churches. A wooden iconostasis was constructed within the church and by the 20th century numerous saints along with the Virgin Mary have been portrayed on the apse. A fresco of Christ Pantocrator can be seen on the dome of the church. A fresco of Saint Clement of Ohrid (whose monastery, Saint Panteleimon, is located close to the church) accompanied by Saint Erasmus of Ohrid can also be seen on a wall of the church.

Image Courtesy of Wikimedia and Rašo.
Sight description based on Wikipedia.
8

Saint Panteleimon is a monastery situated on Plaošnik. It is attributed to Clement of Ohrid, a disciple of Saint Cyril and Saint Methodius. Archaeologists have come to believe that the monastery was the site where the first students of the Glagolitic alphabet (used to translate the Bible into Old Church Slavonic) were taught.

The monastery is believed to have been built when Saint Clement arrived in Ohrid, at the request of Boris I of Bulgaria and restored an old church. Sources say that Saint Clement was not satisfied with the size of the church and therefore built a new one over it and assigned Saint Panteleimon as its patron saint. Many archaeologists believe that Clement himself designed and constructed the monastery. Clement, along with Naum of Preslav would use the monastery as a basis for teaching the Glagolitic and Cyrillic alphabets to Christianised Slavs thus making it a university. Judging by the architectural style and design of the monastery, researchers say that Saint Clement intended for his building to be a literary school for disciples, thus it is believed to be the first and oldest discontinued university in Europe. The exterior of the monastery contains a large number of finely detailed mosaics not far from a stone Baptismal font used to baptize his disciples.

Image Courtesy of Wikimedia and Rašo.
Sight description based on Wikipedia.