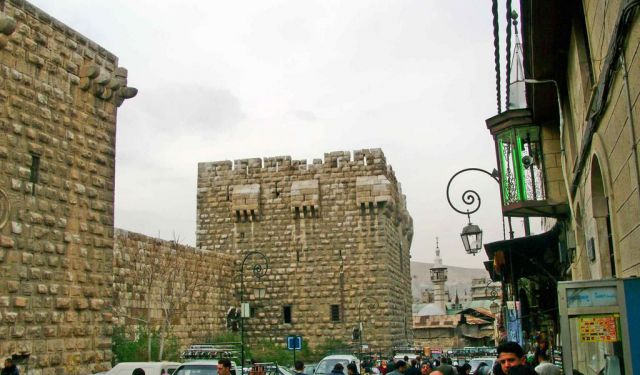 Old Damascus has many precious historic landmarks that are full of mystery. The following self-guided tour will lead you to Damascus’ most amazing landmarks.
Image Courtesy of Wikimedia and Haxxor23.
How it works: Download the app "GPSmyCity: Walks in 1K+ Cities" from iTunes App Store or Google Play to your mobile phone or tablet. The app turns your mobile device into a personal tour guide and its built-in GPS navigation functions guide you from one tour stop to next. The app works offline, so no data plan is needed when traveling abroad.

Located in the north of the historic Old City, Babel Faradees (Gate of Paradise), or Bab al-Amara, is one of Damascus’ seven ancient gates. It was named so because it had been surrounded by water and gardens during the Roman era.
Image Courtesy of Wikimedia and Jerzy Strzelecki.
2

Sayyidah Ruqayya Mosque is a shrine located in Damascus, that contains the grave of Sukayna, the infant daughter of Husayn ibn ‘Alī. After enduring the advent of Karbalā and the torturous journey to Damascus that followed it, Sukayna died at the age of four in Yazid's prison, where she was originally buried. Years later however, upon the flooding of her gravesite, her grave was reopened and she was moved to the site where the Mosque now stands.

The mosque was built around the mausolem in 1985 and exhibits the modern style of Iranian architecture, with a tremendous amount of mirror and gold work. There is a small mosque area adjoining the shrine room, along with a small courtyard in front. This mosque is found a short distance from the Umayyad Mosque and the Al-Hamidiyah Souq in central Damascus.

Image Courtesy of Flickr and amerune.
Sight description based on Wikipedia.
3

Babel Faraj, in the north of Old Damascus, is another one of the seven ancient city gates. The interior dates back to its original construction, while the exterior’s most recent renovation took place in 1948.
Image Courtesy of Wikimedia and Wolfgang Sauber.
4

Qalaa Garden is a beautiful exotic garden located near the ancient Damascus Citadel. This gift from the Swiss houses wonderful plants and gorgeous flowers and offers a spectacular view of the city.
Image Courtesy of Flickr and naydeeyah.
5

Malek Seifoddin Tower is located on the northeast corner of the Damascus Citadel, near Babel Faraj. This impressive historic construction takes you back to the city’s glorious past, reminding one of its long history.
Image Courtesy of Wikimedia and Mewes.
6

The Citadel of Damascus is a large medieval fortified palace. It is part of the Ancient City of Damascus, which was listed as a UNESCO World Heritage Site in 1979. The location of the current citadel was first fortified in 1076 by the Turkman warlord Atsiz bin Uvak. After the assassination of Atsiz bin Uvak, the project was finished by the Seljuq ruler Tutush I. The emirs of the subsequent Burid and Zengid dynasties carried out modifications and added new structures to it. During this period, the citadel and the city were besieged several times by Crusader and Muslim armies. In 1174, the citadel was captured by Saladin, the Ayyubid sultan of Egypt, who made it his residence and had the defences and residential buildings modified.

The citadel is located in the northwest corner of the city walls, between the Bab al-Faradis and the Bab al-Jabiyah. The citadel consists of a more or less rectangular curtain wall enclosing an area of 230 by 150 metres (750 by 490 ft). The walls were originally protected by 14 massive towers, but today only 12 remain. The citadel has gates on its northern, western and eastern flanks. The current citadel dates primarily to the Ayyubid period while incorporating parts of the older Seljuq fortress. Extensive repairs in response to sieges and earthquakes were carried out in the Mamluk and Ottoman periods.

Image Courtesy of Wikimedia and Aziz1005.
Sight description based on Wikipedia.
7

Madrasah Al-Osrooniah, one of the oldest schools in Damascus, was built by Ben Osroon Al Tamimi in 1017. After a fire in 1954, the school was turned into a market, named Asrooniah. Inside its library, Aagafha Halabi, you will find the tomb of Ben Osroon.
Image Courtesy of Flickr and shaire productions.