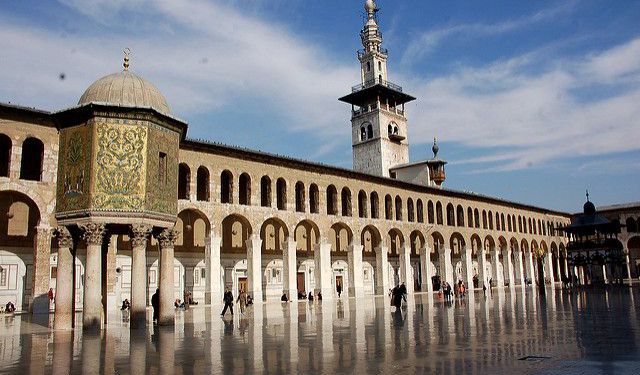 Damascus is the capital and currently the largest city of Syria, commonly referred to by the locals as “ash-Sham” and nicknamed “the City of Jasmine.” Today the city represents a blend of modern and ancient architecture, in which the latter is very carefully preserved and respected. Follow this orientation walk to explore some of the key historic sights of centuries-old Damascus.
Image Courtesy of Flickr and Dan.
How it works: Download the app "GPSmyCity: Walks in 1K+ Cities" from iTunes App Store or Google Play to your mobile phone or tablet. The app turns your mobile device into a personal tour guide and its built-in GPS navigation functions guide you from one tour stop to next. The app works offline, so no data plan is needed when traveling abroad.

Al Harikah Square is a famous commercial square that houses a number of shops and a beautiful fountain in its center. It had been a residential area up until it was bombed by the French military.
Image Courtesy of Flickr and gothopotam.
2

The prayer hall is accessed through a door centered on the portico and flanked by windows with arched tympana. Adjoining the windows on both sides of the portico are three tile panels. The first panel on the east side is a tiled mihrab niche followed by a flat tiled panel depicting a niche. A similar panel is found on the west side of the entrance.

Image Courtesy of Wikimedia and Kazuyoshi Nomachi.
Sight description based on Wikipedia.
3

The main purpose of the railway was to establish a connection between Constantinople, the capital of the Ottoman Empire and the seat of the Islamic Caliphate, and Hejaz in Arabia, the site of the holiest shrines of Islam and the holy city of Mecca, the destination of the Hajj annual pilgrimage. Another important reason was to improve the economic and political integration of the distant Arabian provinces into the Ottoman state, and to facilitate the transportation of military forces. The railway is remarkable both for having had no debt when completed and for having many miles of track below sea level.

Image Courtesy of Wikimedia and Heretiq.
Sight description based on Wikipedia.
4

4) National Museum of Damascus (must see)

It also contains many exhibits made of glass and metal, as well as coins, from different periods of Islamic History. There are also scriptures from the Ummayad era to the Ottomans.

Image Courtesy of Flickr and upyernoz.
Sight description based on Wikipedia.
5

The Yalbugha Mosque, built in 1264, was a Mamluk construction located along the Barada River, overlooking Marjeh Square. It was one of the most famous, influential and beautiful mosques in Damascus, and served as a resting point of the Hajj caravan. It took its name from Yalbugha, the governor of Damascus, who restored it in 1443. The ancient mosque was demolished in 1975 and replaced by a larger one bearing the same name. The new mosque remains unfinished due to its uneven settlement.
Image Courtesy of Flickr and krebsmaus07.
Sight description based on Wikipedia.
6

7) Statue of Saladin (must see)

The Statue of Saladin, a bronze statue depicting the Kurdish Ayyubid Sultan Saladin, is located in front of the Citadel of Damascus. Designed by Syrian sculptor Abdallah al-Sayed, it was unveiled by the late Syrian president Hafez Assad in 1993 to mark the 800th anniversary of Saladin's death. The statue, which graces the main plaza of the city, depicts Saladin in the same pose and the same dress as he appears in a number of 19th-century Western depictions of the Crusades. On each side of Saladin's horse stand two soldiers and a Sufi. Behind the horse, two crusaders, Guy of Lusignan and Raynald of Châtillon, kneel. According to the sculptor, Saladin appears not as an individual warrior but as a leader embodying a wave of popular feeling against the Franks.
Image Courtesy of Wikimedia and Godfried Warreyn.
Sight description based on Wikipedia.
8

The Citadel of Damascus is a large medieval fortified palace. It is part of the Ancient City of Damascus, which was listed as a UNESCO World Heritage Site in 1979. The location of the current citadel was first fortified in 1076 by the Turkman warlord Atsiz bin Uvak. After the assassination of Atsiz bin Uvak, the project was finished by the Seljuq ruler Tutush I. The emirs of the subsequent Burid and Zengid dynasties carried out modifications and added new structures to it. During this period, the citadel and the city were besieged several times by Crusader and Muslim armies. In 1174, the citadel was captured by Saladin, the Ayyubid sultan of Egypt, who made it his residence and had the defences and residential buildings modified.

The citadel is located in the northwest corner of the city walls, between the Bab al-Faradis and the Bab al-Jabiyah. The citadel consists of a more or less rectangular curtain wall enclosing an area of 230 by 150 metres (750 by 490 ft). The walls were originally protected by 14 massive towers, but today only 12 remain. The citadel has gates on its northern, western and eastern flanks. The current citadel dates primarily to the Ayyubid period while incorporating parts of the older Seljuq fortress. Extensive repairs in response to sieges and earthquakes were carried out in the Mamluk and Ottoman periods.
Image Courtesy of Wikimedia and Aziz1005.
Sight description based on Wikipedia.
9

The Mausoleum of Saladin holds the resting place and grave of the medieval Ayyubid Sultan Saladin. It is located next to the northwest corner of the Umayyad Mosque in Damascus. The mausoleum was built in 1196, three years after the death of Saladin. It was once part of the al-Aziziyah madrasah, but nothing remains of the school.

It was originally built by Saladin's son, Al-Adil I. Saladin's body was interred temporarily at the Citadel of Damascus until the construction of the building was completed in 1196. The madrasah was built later by Saladin's other son, Al-Aziz Uthman.

The mausoleum itself is rather small and modest. The main square chamber displays ablaq walls and holds four arches capped by a cupola. Drawing on its history, the interior shows a remarkable mix of Hohenzollern, Ayyubid and Ottoman architecture. The room holds two cenotaphs. The original one, a wooden tomb, richly decorated with geometric and astral patterns, holds Saladin's body. The second one, is a marble coffin which was a gift from Emperor Wilhelm II. The mausoleum also holds another chamber which is used for Quranic recitation, and is accessible from the eastern side, in addition to five smaller rooms along the northern side of the building.
Image Courtesy of Wikimedia and Heretiq.
Sight description based on Wikipedia.
10

The Umayyad Mosque, also known as the Great Mosque of Damascus or formerly the Basilica of Saint John the Baptist, located in the old city of Damascus, is one of the largest and oldest mosques in the world. It is considered the fourth-holiest place in Islam.

After the Arab conquest of Damascus in 634, the mosque was built on the site of a Christian basilica dedicated to John the Baptist (Yahya). The mosque holds a shrine which today may still contain the head of John the Baptist, honored as a prophet by both Christians and Muslims alike, and the place where Isa (Jesus) will return at the End of Days. The tomb of Saladin stands in a small garden adjoining the north wall of the mosque.
Image Courtesy of Wikimedia and Jerzy Strzelecki.
Sight description based on Wikipedia.
11

Al-Hamidiyah Souq, located near the Citadel, is a great open-air market. It stretches from Al-Thawra Street to the Umayyad Mosque and is the largest souq in Syria.
Image Courtesy of Wikimedia and Bernard Gagnon.
12

The Street Called Straight in the New Testament, or Damascus Straight Street is the Roman street (Decumanus Maximus) which runs from east to west in the old city of Damascus, Syria. It was visited by Paul the Apostle as recorded in the Acts of the Apostles.
Image Courtesy of Wikimedia and Mappo.
Sight description based on Wikipedia.
13

Azm Palace is a palace in Damascus, which was originally built in 1750 as a residence for the Ottoman governor of Damascus As'ad Pasha al-Azm. The palace now houses the Museum of Arts and Popular Traditions.

The architecture is an excellent example of Damascene traditional houses. The structure itself consists of several buildings and two wings: the harem and the salamlik. The harem is the family wing, which was a private space for the residents (originally, the Azm family). This wing includes the kitchen, servant quarters, and the baths, which are a replica of the public baths in the city but on a smaller scale. The salamlik is the guest wing, and it comprises the formal halls, reception areas and large courtyards with traditional cascading fountains.

In 1925, the Azm palace was heavily damaged by French artillery during the Syrian revolution. It has since been restored and became a museum of arts and folk traditions. It received the Aga Khan Award for Architecture in 1983.
Image Courtesy of Wikimedia and krebsmaus07.
Sight description based on Wikipedia.