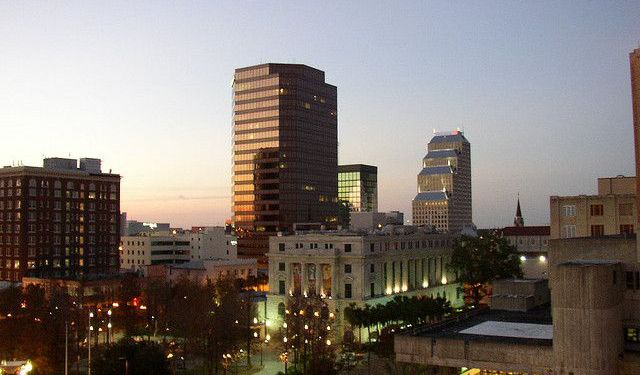 Image by sun dazed on Flickr under Creative Commons License.

In recent years Downtown Orlando, the city's cultural and commercial center, has seen much renovation done in a bid to stimulate tourism. This self-guided tour takes you to some of the city's most prominent museums, historic sites, and Lake Eola Park, a firm favorite among the locals recreation spot. Take your time to explore Downtown Orlando and enjoy yourself in this beautiful city.
How it works: Download the app "GPSmyCity: Walks in 1K+ Cities" from iTunes App Store or Google Play to your mobile phone or tablet. The app turns your mobile device into a personal tour guide and its built-in GPS navigation functions guide you from one tour stop to next. The app works offline, so no data plan is needed when traveling abroad.

The Wells' Built Hotel is a historic hotel that is now an African-American museum. It is located in the center of Orlando's historic Parramore district. Dr. William Monroe Wells built the hotel, and a nearby entertainment venue, for African Americans visiting Orlando. During the segregation era, this hotel served as host to several now famous African-American performers.

Dr. William M. Wells was a prominent African-American physician in Orlando during the first half of the 20th century. One of Orlando's first black doctors, Dr. Wells came to Orlando in 1917. In 1921 he built a hotel for African Americans barred from Florida's segregated hotels. Soon afterwards, he built South Street Casino, an entertainment venue he built to host touring black entertainers. Together, they became a central icon of the African American music community.

Although the Casino is gone, the original hotel remains and has been converted into a modest museum of African American history. Wells' Built Hotel was added to the U.S. National Register of Historic Places in February 2000.

Image by Ebyabe under Creative Commons License.
Sight description based on wikipedia
2

Constructed in 1889, Church Street Station is also known as the Old Orlando Railroad Depot. The South Florida Railroad, which connected Orlando and Tampa to the Atlantic Coast Line Railroad, served this station. The railroad was the work of Henry B. Plant, and it brought tourists from up north who developed the area. Church Street Station was Orlando's central train hub until 1926 when traffic was moved to what is now the Orlando Health/Amtrak Station. In the 1970s, the building and property were purchased to turn the area into an entertainment center.

During the 1970s and 80s, the station served as a nightclub complex, where you could club hop through different themed clubs for one admission price. At one time, it was the fourth biggest attraction in Florida. It's success led Disney to create Pleasure Island, which became part of Downtown Disney, and Universal to create City Walk. Among the many attractions were an old west saloon and opera house.

After some crazy turns of events that involved possible ghost sightings and FBI raids, and historic locomotives, the property went through several revivals and declines. SunRail trains currently stop at the station here, and there is a New Orleans-style event venue. The Mad Cow Theater puts on performances to suit every taste and style. Nearby the Amway Center hosts the local NBA team, the Orlando Magic. There are numerous bars and restaurants nearby in what is known as the Church Street district.
Image by NE2 under Creative Commons License.
3

Visiting hours are Monday through Saturday from 10 am to 5 pm and Sunday from 12 pm to 5 pm. The Docent Program hosts museum expeditions and gives volunteers of the museum’s history center.
Image by Ebyabe on Wikimedia under Creative Commons License.
4

Located on Rosalind Avenue in Orlando, Florida, the Lake Eola Park is a popular meeting place for locals and visitors. The attractive and picturesque recreational area is famous for the Linton E. Allen Memorial Fountain, located in the nearby Eola Lake, which changes colors at night. Park visitors will enjoy the 43 acres of sidewalks that allow one to jog or walk while enjoying the scenic views. In addition, there are gondolas and swan-shaped boats available for rental that glide up and down the lake.

There is something for everyone at Eola Lake. A playground for children, a small outdoor terrace café when you need a bite to eat, and the nearby Walt Disney Amphitheatre are some of the treats you will enjoy when you visit. There is also a Chinese pagoda on the grounds.

Many popular events take place in the park. The Spin City Classic features professional and amateur bicycle races every March. Each July, a fireworks exhibit celebrates the Fourth of July, and Fiesta in the Park features arts and crafts, as well as entertainment.

Tip:
Sundays, with nice weather, are a particularly good time, as there is a farmers' market (10am-4pm), along with food & beer vendors.
There are two quarter feeders if you'd like to feed the swans the bird feed – one next to the pagoda and the other by the playground.
Speaking of which, here you will find one of Orlando's better playgrounds for children. It has slides, juggle gyms, merry-go-rounds and more.

The 21st US President, Chester Arthur, once called Winter Park "the prettiest place I have seen in Florida". Founded as a resort community after the arrival of the South Florida Railroad in 1880, Winter Park is filled with historical houses, museums, acclaimed eateries, and some of the Orlando area's best shopping. Take this self-guided tour to explore the top attractions in this...  view more