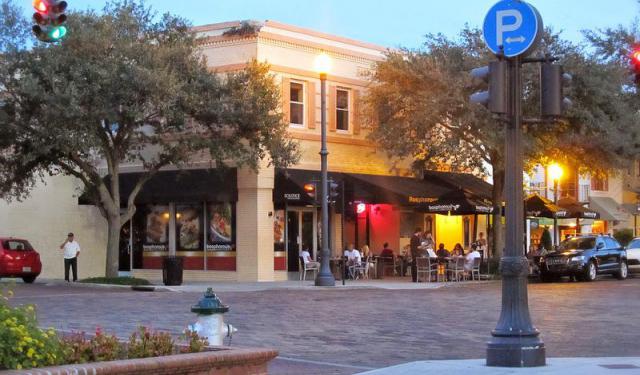 The 21st US President, Chester Arthur, once called Winter Park "the prettiest place I have seen in Florida". Founded as a resort community after the arrival of the South Florida Railroad in 1880, Winter Park is filled with historical houses, museums, acclaimed eateries, and some of the Orlando area's best shopping. Take this self-guided tour to explore the top attractions in this charming little town in Central Florida.
Image Courtesy of Flickr and miosotis jade.
How it works: Download the app "GPSmyCity: Walks in 1K+ Cities" from iTunes App Store or Google Play to your mobile phone or tablet. The app turns your mobile device into a personal tour guide and its built-in GPS navigation functions guide you from one tour stop to next. The app works offline, so no data plan is needed when traveling abroad.

Properly called the Robert Bruce Barbour House, this historic home turned museum was designed by famed architect James Gamble Rogers II. The home is currently restored to how it would have appeared in the 1930s. Barbour was a wealthy industrialist from Boston, who commissioned Rogers to build him a Spanish-style estate and gave the architect Carte Blanche, saying simply that he'd sell it if he didn't like the results. The house turned out to be one of Rogers' favorites. Barbour and the community at large were pretty happy with the stunning home as well.

Built in 1932, the house originally stood on the shores of Lake Osceola. The lakeside property was purchased in 2000 by a local doctor who decided the house was too small for his needs and must be demolished. A community of friends banded together to preserve and move the house to its current location. The City of Winter Park moved the house to a spot overlooking the Winter Park Golf Course. The 750-ton structure had to be balanced on 20 pneumatically-leveled dollies for the 300-yard journey.

Be sure to check the Casa Feliz website for days and hours that the property is open for tours. The property is not open every day and is often closed for private events. Also, check out their events page to see details about their Music at the Casa and Casa Parlor Series.

Image Courtesy of Wikimedia and Ebyabe.
2

The Morse Museum is noted for its collection of art nouveau and is also home to the world's most extensive collection of Louis Comfort Tiffany's works. The museum began on the campus of Rollins College in 1942 and moved to its current location in 1978.

Louis Comfort Tiffany was the son of Charles Lewis Tiffany, co-founder of Tiffany & Co. jewelers. But Louis Comfort set his own path from his father's business, and he started life as a painter and glassmaker.

In 1957, the museum's first director learned that Tiffany's luxury estate Laurelton Hall on Long Island had burned. He worked with Tiffany's daughter to purchase all of the surviving pieces. Today, the museum houses an impressive collection to includes Tiffany's 1893 chapel built for the World's Columbian Exposition in Chicago. There are also collections of leaded glass windows and every other medium that Tiffany explored throughout his varied career.

The museum houses other artists' works, including a significant collection of American pottery and many late nineteenth and early twentieth-century American paintings.

Winter Park was founded in the late 19th century by northern business magnates as a resort community. Henry Plant’s railroad had connected Orlando and Sanford with the Atlantic coast rail lines, and visitors were flocking in. Northerners came down to thaw out and to recuperate from various maladies. A spot along the railroad tracks, nestled between several beautiful lakes, caught the eye of Loring Chase. Together with a group of wealthy friends, they planned out the town and promoted it heavily. It eventually became the site of Florida's first four-year college, Rollins, and of the communities crown jewel, the Seminole Hotel, a long-gone luxury resort.

To further attract vacationers, the city planners borrowed some themes and names. And so was born the second-most famous Park Avenue in the US. You won't find quite the same amount of hustle and bustle here as on New York's version, but you will find shopping and dining with a cozy village vibe. Along the avenue, you'll find Central Park, with a stage on one end for local events and a beautiful rose garden.

If you have time, check out the pontoon boat tour. It's an excellent way to see the city via the many canals that connect the area's lakes. Knowledgeable and humorous tour guides fill you in on the community's history and happenings along the way. Most of Winter Park's attractions are centered around Park Avenue, making the city a great place to stroll around. You'll find the Morse Museum of American Art, Casa Feliz Historic House Museum, Rollins College, and a history museum along the avenue.
Image Courtesy of Wikimedia and Miosotis jade.
4

If you'd like to get a feel for the heydays in Winter Park, pop into the Winter Park History Museum for a quick visit. The museum features free exhibits that preserve the city's story. From the earliest settlers in the area to the luxury resorts and hotels that attracted visitors to this oasis spot, the museum looks at who came here and why. The organization also hosts history talks and events throughout the year.

Rotating exhibits have covered many of Winter Park's unique attractions over the years. From the railroads that started the town to how the great wars affected small towns like this one, exhibits focus on a specific area of Winter Park's existence. The history museum is a small facility with mostly rotating exhibits, so it's worth stopping by each time you're in town to see what's new.
Image Courtesy of Wikimedia and Ebyabe.
5

5) All Saints Church of Winter Park

The historic All Saints Episcopal Church, located at 388 East Layman Street, was formed in this location in 1883. The building that currently stands here was built in 1941 and designed by Ralph Adams Cram and H.C. Cone in the Late Gothic Revival style. The church is a growing and active parish with Sunday and weekday services, several ministries, and a school. The church is open to all. In 2000, the church was added to the US National Register of Historic Places.
Image Courtesy of Wikimedia and Ebyabe.
6

Built on the campus of Rollins College in 1932, “The Annie,” as it's called, was a gift from philanthropist Mary Curtis Bok Zimbalist in honor of her friend Annie Russell. The theater is named on the National Register of Historic Places and is the longest continuously operating theater in Florida.

Shows include musicals and plays featuring student performers. Their productions have garnered praise from the Orlando Sentinel, and Rollins' undergraduate theater department is considered one of the best in the nation. Students produce and perform four plays or musicals every year. The 360-seat proscenium theater is said to still host the "friendly ghost" of Annie Russell, who claims her seat for every show wearing her trademark lavender dress.

Annie Russell was a British-American stage actress who began performing at the tender age of eight. She worked with several theater companies over her long and varied career in New York and Philadelphia. Together with her friend Mary Curtis Bok Zimbalist, she helped found the dramatic arts program at Rollins. Russell opened the theater in 1932 with a performance of In a Balcony and continued to teach at the school until her death in 1936.
Image Courtesy of Wikimedia and Ebyabe.
7

The historic Knowles Chapel is on the Rollins Campus, and it serves as the college's spiritual centerpiece. It was dedicated in 1932 and was designed by the famous ecclesiastical architect Ralph Adams Cram. Cram supposedly considered this chapel his favorite of the more than 75 churches and cathedrals he designed. Its uniqueness shines today as a centerpiece of the Rollins' campus. The Knowles Memorial Chapel is listed on the National Register of Historic Places and was named on Florida Architecture: 100 Years, 100 Places.

The Dean of Religious Life at the school offers a nondenominational Christian Sunday worship service, Bible studies, wedding ceremonies, and retreats. The chapel is used as a quiet retreat on campus and a meeting place. The chapel is a popular local wedding venue. In the college's words, the chapel "is a visible reminder of the relationship between the religious life and the academic search for truth."
Image Courtesy of Wikimedia and Ebyabe.

In recent years Downtown Orlando, the city's cultural and commercial center, has seen much renovation done in a bid to stimulate tourism. This self-guided tour takes you to some of the city's most prominent museums, historic sites, and Lake Eola Park, a firm favorite among the locals recreation spot. Take your time to explore Downtown Orlando and enjoy yourself in this beautiful city.