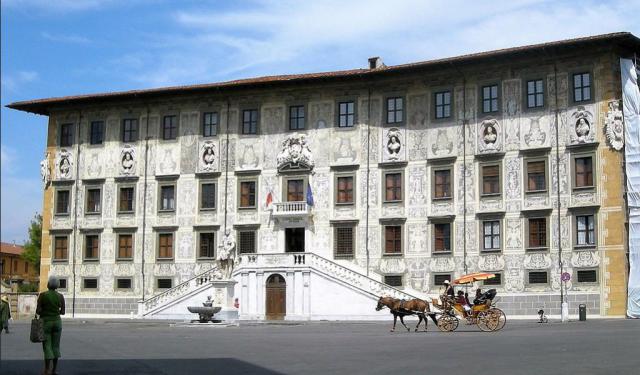 Image by Albarubescens on Wikimedia under Creative Commons License.

Italy has a glorious heritage of wonderful palaces that transport us back in time. Take our Palace Walking Tour to see the most amazing palaces and casas in Pisa and learn their fascinating story.
How it works: Download the app "GPSmyCity: Walks in 1K+ Cities" from iTunes App Store or Google Play to your mobile phone or tablet. The app turns your mobile device into a personal tour guide and its built-in GPS navigation functions guide you from one tour stop to next. The app works offline, so no data plan is needed when traveling abroad.

First built in the 12th Century, this structure was transformed into a palace in the 17th Century. Parts of the original edifice remain, although the building also had to be restored more recently after suffering damage in World War II. Highlights include the two large stone arches on the facade, two lancet windows on the first floor and an exquisite marble pillar erected on the ground floor to replace the original stone column.
Image by Sailko on Wikimedia under Creative Commons License.
2

Some of the most beautiful buildings in Pisa are to be found on the Knight’s Square and the small Palazzo del Consiglio dei Dodici is one of them. The Palace of the Council of the Twelve – and the name sounds like something out of Camelot – once belonged to the Order of the Knights of Saint Stephen. It was where they held court and made decisions. The palace was first mentioned in the Middle Ages as the Palace Archive and Chancellery. In 1509 it was known as Priory Palace. The Order took it over in 1603 and the architect Francavilla rebuilt it in harmony with the other buildings on the square.

The Renaissance style façade is of peach colored plaster with the window edgings, portal with its twin columns, the coat of arms and corner cornice reinforcements in white marble. Inside there is a bust of the Grand Duke Ferdinand I de Medici and the remains of a 16th century fresco of the Assumption. There are also the coats of arms of the Medici family and of the Order. The walls in the Hearing Room feature nautical scenes painted by Lippi and Giusti in 1681. The carved and gilded ceiling has a painting representing the Virtues, painted by Salimbeni in 1602. The centerpiece of the ceiling in the Grand Hall is of the Triumph of Saint Stephen and was executed by Gabrielli in 1692.

Image by Sailko on Wikimedia under Creative Commons License.
3

The Italian nobility often lived in “palaces”, even if the buildings were no more than huge town houses looking very much like the houses on either side of it. This is the case with the Palazzo delle Vedove. Sadly the palace has suffered over the years and if you don’t know its there, you would walk past without a second glance. It was built on the corners of via Santa Maria and via Trento for the Bocci family and at the time wasn’t a palace. Construction was long as each successive member of the family who lived there added things on or had them pulled down. Building started in the 12th century and it was finally finished in the 14th.

On via Trento you can see part of a particularly fine example of four medieval mullioned windows, but renovation during the late 16th century partly covered them with rectangular plaster and blind windows above. The building was purchased by the Medici family and they changed the name to the Palace of Widows. The elderly female members of the family lived there – the widows. The archway and corridor above it in via Santa Maria joins the palace to the Torre de Cantone and from there another arch lead to the Chiesa San Nicola. These corridors were used by the ladies so that they could visit the church without having to walk through the streets.

Image by Sailko on Wikimedia under Creative Commons License.
4

You will find the Palazzo Poschi on the corners of via San Francesco and Borgo Stretto. It very well preserved as the renovation work carried out in 2005 restored it to its former elegance. The palace consists of two buildings: the 11th century tower on via San Francesco and the main body of the building built in 1496. It was constructed on three storeys, the ground floor being loggias, that now front shops and a restaurant. The arches of the arcade are supported by Corinthian-style columns with Roman capitals. The first and second floors are of red brick with 12 lovely mullioned windows, each with three slender marble columns. Since 1905 the building was used as offices and was left remarkably untouched by interior decorators.

It was built for the Poschi family, but by 1840 the owner was up to his neck in gambling debts. He fled the city and the palace was sold by auction. It was bought for a modest sum by Toscanelli, who renovated the exterior and the interior frescoes and his family lived on the upper floors until the end of the 19th century. An insurance company took it over in 1905 and stayed there until the late nineteen fifties. It remained empty for many years, until renovation work was carried out by Albertino Luciano, who carefully restored the ancient frescoes. The palace is now rented out as individual office space.

Image by Sailko on Wikimedia under Creative Commons License.
5

This mansion was built between the 13th and 14th centuries in a structure with pillars and arches, the masonry of which is still visible in the facade. On the ground floor there are pillars of limestone, while the upper floors are in cotto. Each floor has four intricate segmental arches, while the windows are framed in sandstone. The house was the residence of the family of the Silk Gaetani (or Caetani) Mouth, along with Villa Corliano. Unusually for Pisa, it boasts large windows and extensive delicate decoration.
Image by Sailko on Wikimedia under Creative Commons License.
6

This palace's present form dates back to the 19th Century, when it was renovated at the initiative of Alexander Gherardesca. Today it's a State building which holds rich documentation on the history of the medieval city and the surrounding region. Historically, the palace is also famous for being one of the last homes of English poet Lord Byron between 1821 and 1822. A typical jewel of Pisa, it's got white stone walls and sophisticated decorations.
Image by Taccolamat on Wikimedia under Creative Commons License.
7

This casa's original construction dates from the 12th Century. Its pillars and verrucana stone corbels can still be seen on the facade. Interestingly, the upper floors and segmental arches are made of stone instead of brick. There's also a fragment of a Roman sarcophagus from the 3rd Century, possibly a muse, which popular tradition has been identified as the legendary heroine Pisan Kinzica de 'Sismondi.
Image by Sailko on Wikimedia under Creative Commons License.