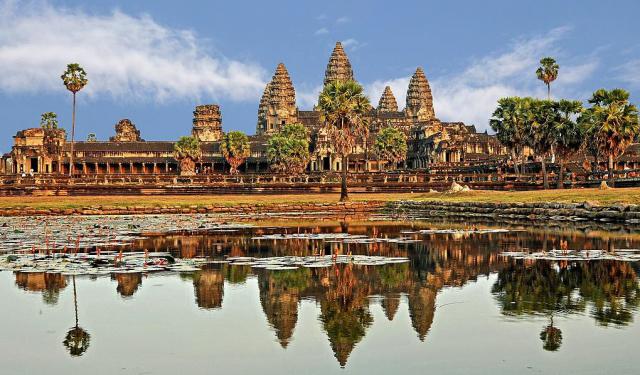 Siem Reap is famous for ancient Hindu temples. These temples serve as proof of the ancient Khmer civilization. Angkor Wat, or Angkor temple, features several remnants from this civilization. Explore old Hindu mythology, traditions, and religion with the Siem Reap Temples.
Image Courtesy of Wikimedia and Dennis Jarvis.
How it works: Download the app "GPSmyCity: Walks in 1K+ Cities" from iTunes App Store or Google Play to your mobile phone or tablet. The app turns your mobile device into a personal tour guide and its built-in GPS navigation functions guide you from one tour stop to next. The app works offline, so no data plan is needed when traveling abroad.

Angkor Wat, or Angkor temple, is considered part of the UNESCO World Heritage Site. The temple is situated inside a park with other temples that exhibit the only lasting remains of the Khmer civilization. Angkor Wat consists of several terrific towers. One tower in the middle of the temple represents the mythical Mount Meru. Inside, the walls are filled with drawings and sculptures depicting scenes from Hindu mythology.
Image Courtesy of Wikimedia and Heiner Faulhaber.
2

Phnom Bakheng at Angkor is a Hindu temple in the form of a temple mountain. Dedicated to Shiva, it was built at the end of the 9th century, during the reign of King Yasovarman (889-910). Located atop a hill, it is nowadays a popular tourist spot for sunset views of the much bigger temple Angkor Wat, which lies amid the jungle about 1.5 km to the southeast. The large number of visitors makes Phnom Bakheng one of the most threatened monuments of Angkor.

Constructed more than two centuries before Angkor Wat, Phnom Bakheng was in its day the principal temple of the Angkor region, historians believe. It was the architectural centerpiece of a new capital, Yasodharapura, that Yasovarman built when he moved the court from the capital Hariharalaya in the Roluos area located to the southeast.

Phnom Bakheng is a symbolic representation of Mount Meru, home of the Hindu gods, a status emphasized by the temple’s location atop a steep hill. The temple faces east, measures 76 meters square at its base and is built in a pyramid form of six tiers. At the top level, five sandstone sanctuaries, in various states of repair, stand in a quincunx pattern—one in the center and one at each corner of the level’s square. Originally, 108 small towers were arrayed around the temple at ground level and on various of its tiers; most of them have collapsed.

Image Courtesy of Wikimedia and Manfred Werner.
Sight description based on Wikipedia.
3

The South Gate of Angkor Thom is also a very popular tourist destination. Angkor Thom was the capital of the Khmer empire and this gate served as the southern entrance. The gate was designed with the face of the goddess Avalokiteshvara, which means in Chinese, "Lord who looks down."
Image Courtesy of Wikimedia and Manfred Werner.
4

The Bayon is a well-known and richly decorated Khmer temple at Angkor in Cambodia. Built in the late 12th century or early 13th century as the official state temple of the Mahayana Buddhist King Jayavarman VII, the Bayon stands at the centre of Jayavarman's capital, Angkor Thom. Following Jayavarman's death, it was modified and augmented by later Hindu and Theravada Buddhist kings in accordance with their own religious preferences.

The Bayon's most distinctive feature is the multitude of serene and massive stone faces on the many towers which jut out from the upper terrace and cluster around its central peak. The temple is known also for two impressive sets of bas-reliefs, which present an unusual combination of mythological, historical, and mundane scenes. The current main conservatory body, the Japanese Government team for the Safeguarding of Angkor (the JSA) has described the temple as "the most striking expression of the baroque style" of Khmer architecture, as contrasted with the classical style of Angkor Wat.

Image Courtesy of Wikimedia and Allie Caulfield.
Sight description based on Wikipedia.
5

5) Terrace of the Elephants (must see)

The Terrace of the Elephants is part of the walled city of Angkor Thom, a ruined temple complex in Cambodia. The terrace was used by Angkor's king Jayavarman VII as a platform from which to view his victorious returning army. It was attached to the palace of Phimeanakas, of which only a few ruins remain. Most of the original structure was made of organic material and has long since disappeared. Most of what remains are the foundation platforms of the complex. The terrace is named for the carvings of elephants on its eastern face.

The 350m-long Terrace of Elephants was used as a giant reviewing stand for public ceremonies and served as a base for the king's grand audience hall. It has five outworks extending towards the Central Square-three in the centre and one at each end. The middle section of the retaining wall is decorated with life size garuda and lions; towards either end are the two parts of the famous parade of elephants complete with their Khmer mahouts.
Image Courtesy of Wikimedia and Heron.
Sight description based on Wikipedia.
6

6) Terrace of the Leper King (must see)

The Terrace of the Leper King (or Leper King Terrace) is located in the northwest corner of the Royal Square of Angkor Thom, Cambodia. It was built in the Bayon style under Jayavarman VII, though its modern name derives from a 15th century sculpture discovered at the site. The statue depicts the Hindu god Yama, the god of Death. He was called the Leper King because discoloration and moss growing on the original statue was reminiscent of a person with leprosy, and also because it fit in with a Cambodian legend of an Angkorian king who had leprosy. The name that the Cambodians know him by, however, is Dharmaraja, as this is what was etched at the bottom of the original statue.
Image Courtesy of Wikimedia and Serinde.
Sight description based on Wikipedia.
7

Preah Pithu or Prah Pithu, is a group of five temples at Angkor, Cambodia. They're located in Angkor Thom, north-east of the Bayon, in front of Tep Pranam. The temples are near but they weren't built in the same period, except for two of them, so there is no apparent order. They're identified by letters: T, U, V, W and X. "X" is a buddhist temple, it remained unfinished and is probably the latest. The others are Hindu. The five temples are in bad conditions, upper levels are ruined, but their carvings are interesting and the site is rather peaceful, wooded and scarcely crowded. A moat, often dry, surrounds some of the temples. They were cleaned first by Jean Commaille in 1908, then by Henri Marchal from 1918 to 1920.
Image Courtesy of Wikimedia and Riccardo.fabris.
Sight description based on Wikipedia.