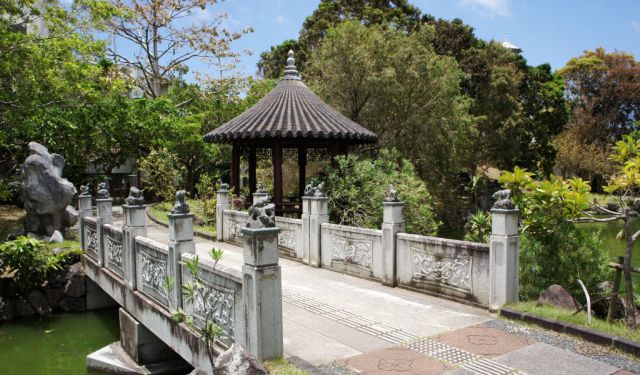 As the capital of Okinawa Prefecture and the main city on the island of Okinawa, Naha is a city with plenty to offer. This self-guided walking tour will take you to the most important attractions in the city, without which your visit to Naha wouldn't be complete. Sugar-Loaf Hill, Tsuboya Pottery Museum, just to name a few, are must sees while in Naha.
Image Courtesy of Wikimedia and 663highland.
How it works: Download the app "GPSmyCity: Walks in 1K+ Cities" from iTunes App Store or Google Play to your mobile phone or tablet. The app turns your mobile device into a personal tour guide and its built-in GPS navigation functions guide you from one tour stop to next. The app works offline, so no data plan is needed when traveling abroad.

During the Ryukyu Kingdom, Tsuboya district was the center of Okinawan pottery. Some workshops of the era have survived and can be seen today. The Tsuboya Pottery Museum shows the techniques and illustrates the history of Tsuboya pottery. You should definitely visit this amazing place and learn the facts about Tsuboya pottery.

The museum applies an admission fee of 315 yen. Tsuboya Pottery Museum is open from Tuesday to Sunday from 10 am to 6 pm (entry until 5:30 pm).

Image Courtesy of Wikimedia and 663highland.
2

Sugar-Loaf Hill is a true historic landmark, and although very different today, 60 some years ago it was the place of a great battle between the Imperial Japanese Army and US forces. Today the hill has been transformed into a metropolitan center with a water tower at the summit, however some still remember how much blood has been spilled here. The fight for the Sugar-Loaf Hill resulted in the capture of the hill by the US forces, but at great losses to both sides. A memorial plaque up on the hill gives the history of that battle.
Image Courtesy of Wikimedia and Department of Defense Photo.
3

Surprisingly large, this Catholic church impresses with its mix of architectural elements. On one hand, the orange roof leans towards the typical Okinawan architecture, on the other hand, the cross and stained glass windows towards the Roman Catholic architecture. This combination creates an atmosphere of fusion between two so very different worlds.
Image Courtesy of Wikimedia and アラツク.
4

The Okinawa Prefectural Museum & Art Museum is located is a museum complex in the Omoro-machi area of Naha, the capital city of Okinawa Prefecture. It opened in November 2007, and includes art, history, and natural history museums focusing specifically on Okinawan topics.

The museum building, constructed largely of local Okinawan limestone, was designed with the imagery of Okinawa's gusuku (castles) in mind. It contains roughly 24,000 square meters of floor space on its four above-ground levels and one basement level. The art museum and history/natural history museum are located on opposite sides of a common lobby, and visitors can buy admission to one or the other, or a combination ticket.

The Okinawa Prefectural Museum was originally established in May 1972, as a matter of course following the end of the US Occupation of Okinawa and its return to Japan, being primarily a renaming and reorganization of the Ryukyu Governmental Museum established in 1946. It was based in the Ōnaka-chō neighborhood of Shuri, near Shuri Castle, and was closed in 2007, moving to the new site. The museum in its former incarnation focused upon Okinawan history, natural history, folk life, and related topics. The art museum included on the new site is the first prefectural art museum in Okinawa.

The gardens in front of the museum include reproductions of two traditional-style Okinawan buildings - a thatch-roofed storehouse, and a traditional-style tile-roofed home - along with a number of shisa statues and other items representing Okinawa's tradition of pottery and ceramics. A sculpture garden located behind the museum features large contemporary artworks, and opens onto a large public park, Shintoshin Park.

The Natural History section of the museum is entered via a glass-floored walkway designed to look as though one is walking over coral, approaching an island. A large wrap-around screen shows short films about the geological origins of the Ryukyu Islands and about its natural environment, flora, and fauna. The History section is organized around a large map of the Ryukyu archipelago projected onto the floor and connected into a number of computer terminals allowing visitors to explore aspects of individual islands, including satellite photographs of famous sites, native flora and fauna, and local culture. The Art Museum includes spaces for special temporary exhibits along with galleries displaying objects from the museum's collection.


Image Courtesy of Wikimedia and 663highland.
Sight description based on Wikipedia.
5

Located within walking distance of Tomari port, the International Cemetery is a peaceful place near the hustle and bustle of the port, it is a place dedicated as the resting place of foreigners. As you walk among the crosses and the weather-worn memorials, you will notice a monument erected in honor of Commodore Perry. Perry was the Ambassador to the United States, sent to Japan in 1853 to form friendship relations between the two nations. He landed at Tomari Port before landing on mainland Japan, and later used it several times for official duties. Perry made great efforts to bring Americans and Okinawans together, and the small monument at the International Cemetery reminds of this fact.
Image Courtesy of Wikimedia and Abasaa.
6

Completed in 1992, the Fukushu-En Park is aimed to celebrate 10 years of partnership between Naha and Fuzhou City. The fabulous gardens are a real treasure trove of exoticism and highlight the beauty of Chinese nature, especially found in Fuzhou City. You should definitely visit this amazing corner of paradis and get lost among its unbelievable beauty.
Image Courtesy of Wikimedia and 663highland.
7

Tsushima Maru was a Japanese passenger/cargo ship that was sunk by the submarine USS Bowfin during World War II, while carrying hundreds of schoolchildren from Okinawa to Kagoshima. On August 22, 1944, Bowfin attacked the convoy in which the Tsushima Maru was sailing and sank her, close to the island of Akusekijima. 1,484 civilians, including 767 schoolchildren, were killed. 59 children survived the sinking.

In commemoration of the tragedy a park and a museum have been built. At Tsushimamaru Museum you can see the names of those who survived and who perished, the pictures of the children, a replica of the ship, and many other items reminding of the Tsushima Maru sinking. In the park, there is also a tower from which you can see the port from where Tsushima Maru departed.
Image Courtesy of Wikimedia and 663highland.
Sight description based on Wikipedia.
8

Founded in 1367, Gokokuji Temple is a Buddhist temple in Naha. The Gokokuji Temple was an important place of worship during the Chuzan and Ryukyu kingdoms. Later, this place was associated with Dr. Bernard Bettelheim, a Christian missionary, and Matthew Calbraith Perry, a Commodore of the U.S. Navy. The building itself is a typical Japanese style architecture with a red tile roof.
Image Courtesy of Wikimedia and ChiefHira.
9

Naminoue Shrine, literally "Above the Waves Shrine", is a Shinto shrine in Naha, Okinawa, Japan, the primary shrine in the prefecture. It sits atop a high bluff, overlooking Naminoue Beach and the ocean. Originally a sacred space of the native Ryukyuan religion, due to its location and natural beauty, it was dedicated to nirai kanai, the mythical source of all life, and to the sea. At some point it came to be known as Hana gusuku and Nanminsan, and later was incorporated into the Japanese system of Shinto shrines.

According to legend, it was founded after a fisherman, who had come to that spot to fish everyday, caught a mysterious stone. He began to pray to it, and began to receive better hauls in his fishing; the stone glowed, and the man treasured it. However, the gods stole the stone, and the man fled. From then on, there was an oracle at that spot, until the time when it became known as Nanminsan. Other stories tell that the man was visited by an avatar of Kumano, who commanded the spiritual protection of the nation, and that, the man having related such to the royal government, the shrine was erected. According to the historical document, a Buddhist temple was founded on the site, to be associated with the shrine, in 1367, by Raijū, a monk from Japan's Satsuma province. The shrine then came to be associated with protection of the many ships coming and going from Naha's port, as Okinawa's trade with Korea, China, Japan, and regions to the south expanded. Prayers were made for safe journeys, and kami of the sea, of navigation and related matters were enshrined there. In addition, at the beginning of each year, the King visited the shrine and formally prayed on behalf of all the nation for good harvests and good fishing, and for the peace and prosperity of the nation. Following the Meiji Restoration, the Ryūkyū Kingdom was dissolved and formally annexed by Japan as Okinawa Prefecture. The shrine was formally established as a Shinto shrine under the Imperial Household Agency in 1890, and designated as the shrine for the protection of the tranquility of all Okinawa.

The shrine was destroyed in the 1945 battle of Okinawa; the honden (main hall) and shrine office were rebuilt in 1953, as was the worship hall (haiden), eight years later. Construction of a number of other buildings, including a number of smaller shrines within the grounds, was completed in 1993.
Image Courtesy of Wikimedia and 663highland.
Sight description based on Wikipedia.

Naha, the capital of Okinawa, although small a city, does contain a plethora of historic attractions. If you decide to visit Naha, make sure to explore the Shikina-en Garden, Tamaudun Mausoleum, but most importantly, the Shuri Castle, a restored royal residence of the Ryukyu Kingdom, flourished throughout the 15th-19th centuries and recognized as the birthplace of Okinawa karate. Take this...  view more