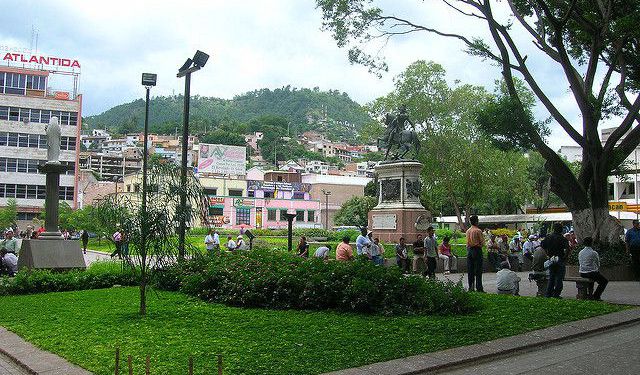 Aside from being Honduras's capital, Tegucigalpa is also the country's cultural center rich in historic, religious and artistic heritage. The city is endowed with interesting museums, presenting works in various media: picture, sculpture, literature, etc; plus a number of historic churches and parks. Take this orientation walk to discover Tegucigalpa's top attractions.
Image Courtesy of Flickr and Micah MacAllen.
How it works: Download the app "GPSmyCity: Walks in 1K+ Cities" from iTunes App Store or Google Play to your mobile phone or tablet. The app turns your mobile device into a personal tour guide and its built-in GPS navigation functions guide you from one tour stop to next. The app works offline, so no data plan is needed when traveling abroad.

For many years, the former President's house was the most impressive building in the center of the capital. It was not only the center of political and military power in the country but also one of the most impressive architectural works of the nineteenth century, with its dome in French Renaissance Revival style and its circular towers and crenellated walls in Neo-Medieval style. Now it houses the Museo de la Republica, which presents the history of the country through collectibles and artifacts, from the colonial period till the present.
Image Courtesy of Flickr and Micah & Erin.
2

Iglesia La Merced was built in 1654 by parents and mercenaries. It has two buildings that make up a whole construction, known as Paraninfo and it is located in Plaza La Merced. The church is located in an impressive building, designed in colonial Renaissance style, with its flat facade devoid of any ornaments and its main entrance accented by columns. It also features a single rectangular nave and an interior decorated with ornaments of colonial character and beautiful pictures.
Image Courtesy of Flickr and Davide Restivo.
3

The Tegucigalpa Cathedral, dedicated to Archangel St. Michael, the patron of the city, was built in the eighteenth century between 1765 and 1786, but only in the nineteenth century did it become the city's cathedral. Since then, this impressive religious site has suffered damages and was restored many times, but its own Baroque style was retained. The cathedral interior is also remarkable for its frescoes of Jose Miguel Gomez, the leading painter of the colonial period in Honduras.
Image Courtesy of Wikimedia and Stefan Zeugner.
4

Iglesia de San Francisco is the first established church in Tegucigalpa, founded in 1592 by the Franciscans and redecorated in 1735. Being the oldest existing church, it is very valuable in the religious life of the people and is an important part of the historical heritage. The church is designed in a single nave and is remarkable for its many colonial-era religious paintings, which beautify the interior.
Image Courtesy of Flickr and jrozwado.
5

Located in Valley Park in Tegucigalpa, the Historical Military Museum boasts a great collection of items belonging to important personalities and military officers of Honduras, hence providing a retrospective on the military history of the country. Of great interest to visitors is the room with antique and modern firearms. The museum is open Monday through Friday between 8 am to 16 am.
Image Courtesy of Flickr and madmack66.
6

Parque Central, also known as Plaza Morazan, is a nice place to stop by. Sitting on a bench, you can observe the local people and their behavior, the little vendors and the nearby attractions such as Cathedral San Michael and the remarkable monument of General Francisco Morazán on horseback.
Image Courtesy of Flickr and Micah & Erin.
7

Museo Para La Identidad Nacional is located in the former Palacio de los Ministerios, dating from 1880, which was designed in late Neoclassical style and was declared a National Monument. Its mission is to display the historical and cultural heritage of the country and spread universal culture. The museum's permanent collection is presented in 4 rooms, reflecting the geography, geology, culture and history of Honduras. A great feature is the Virtual Copán auditorium, which shows the virtual tour of the Mayan city "Copán".
Image Courtesy of Flickr and Adalberto.H.Vega.
8

The National Theater Manuel Bonilla was established in 1915, upon the initiative of a group of artists, and it is considered to be an architectural masterpiece, because of its spacious interior inspired by the Athens Theatre of Paris and its exterior that was designed in Renaissance style. It occupies an important place in the cultural life of the city, housing different performances such as plays, dance shows and live concerts.
Image Courtesy of Flickr and Micah & Erin.
9

A monument that today belongs to the cultural and religious heritage of the capital of the country, valuable for its history and architectural structure, is the church of El Calvario. Its name refers to the place in Jerusalem where the crucifixion of Jesus took place. It is also known as the chapel El Cementerio, established in 1783 in colonial Renaissance style, and is located next to Herrera park.
Image Courtesy of Flickr and Valerie's Genealogy Photos.
10

Parque La Concordia is an almost perfect replica of the greatness of Maya's people, as it is one of the most wonderful sights in the capital's historic center. The park was established in 1883 as Bográn park and was later transformed into a garden, where one could admire Mayan replicas of stelae, temples and figures from the ruins of Chichen Itza and Copan.
Image Courtesy of Flickr and vastateparksstaff.
11

The Villa Roy National Museum is housed in a beautiful building, which was once the former residence of ex-Honduran president Julio Lozano. It reflects the life and activity of the Honduras heads of state from 1821 to 1960 and possesses an interesting collection of vintage cars used by them. The museum shows the country's history and exhibits pre-Columbian and contemporary artifacts that include a variety of fields.
Image Courtesy of Flickr and Micah & Erin.
12

Iglesia de Nuestra Señora de los Dolores is a Roman Catholic church, remarkable for its Baroque architecture, and it was built over 80 years, from 1732 to 1815. It is the second largest church in the city and has considerable religious significance, serving as an example of the combination of the Catholic religion with Indian and African influences.
Image Courtesy of Flickr and Carlos Adampol.
13

The park La Leona was opened in 1925 and since then became one of the most visited sites in the capital. In its center there is a bronze statue of General Manuel Bonilla, former president of the republic. With spectacular views of much of Tegucigalpa and Comayagüela, fresh, cozy and renovated in 2004, La Leona is one of the nicest old corners of the capital, and it is worth visiting.
Image Courtesy of Flickr and scott.zona.