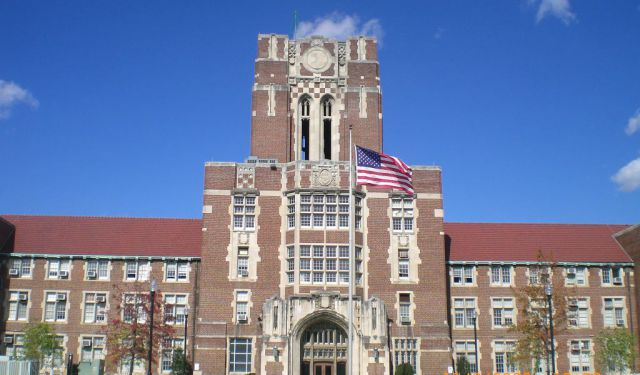 The University of Tennessee in Knoxville, located in downtown’s west end, draws many visitors to the city. Founded in 1794 as William Blount College, nowadays it covers 550 acres, including over 200 buildings and a faculty of more than 1,400. Take the following tour to discover UTK’s best attractions.
Image Courtesy of Flickr and Tim Bounds.
How it works: Download the app "GPSmyCity: Walks in 1K+ Cities" from iTunes App Store or Google Play to your mobile phone or tablet. The app turns your mobile device into a personal tour guide and its built-in GPS navigation functions guide you from one tour stop to next. The app works offline, so no data plan is needed when traveling abroad.

Ayres Hall is a central iconic and historic landmark building at the University of Tennessee (UT) in Knoxville.

The building was designed by Miller, Fullenwider and Dowling of Chicago, and completed in 1921. It is named for Brown Ayres (1856–1919), the university's 12th president from 1904-1909. A extensive restoration began in the fall of 2008 and ended in January 2011. The renovations included central air conditioning and heating, terrazzo floors and benches, faces for the tower's four clocks, refurbished classroom furnishings, such as chairs, tables, and slate chalkboards, and stairways, and a north courtyard. The faces for the clocks and the terrazzo floors were in the original designs, but had never been installed due to costs. The north courtyard, which faces Cumberland Avenue, was never implemented in the original designs.

The Gothic Revival structure rises 140 feet (43 m) above its base. The distinctive checkerboard feature at the top of the tower has been replicated in UT Orange and white in the endzones at Neyland Stadium and at the ends of the court in Thompson–Boling Arena, both nearby. The building houses the offices of the University's College of Arts and Sciences as well as UT's mathematics department.

Image Courtesy of Wikimedia and Nightryder84.
Sight description based on Wikipedia.
2

Neyland Stadium, the central attraction of the UT campus with over 100,000 seats, is the third largest stadium in the U.S. Named after General Robert Neyland, the former athletic director and coach, it was built in 1921. It has been extended several times throughout the years. This magnificent structure features a stunning brick archway, a bronze statue of Neyland, a 4,500 square foot scoreboard and the original orange and white checkerboard end zone. It also houses the UT's Department of Anthroplogy. This stadiums hosts a variety of large events in addition to college and professional football games.
Image Courtesy of Wikimedia and Knoxville Area Transit.
3

Around 1930 funds were allocated to host a contest to create a sculpture capturing the spirit and ideals of the University of Tennessee. Theodore A. Beck, a student of the Yale School of Fine Arts, designed this winning statue of a man bearing a torch. His nine foot Volunteer Statue was cast and placed in Circle Park in 1968. Circle Park is a green space flanked by the UT’s Communications and University Extension buildings.
Image Courtesy of Flickr and Joelk75.
4

This remarkable building accommodates the University of Tennessee’s main library. Named after John C. Hodges, honored scholar and library patron, the original building constructed in 1969 is at the core of the present one built in 1987. This six-story building houses the Special Collections department, a studio, administrative offices and an auditorium. Its collection consists of over two million books, periodicals, microfiche, multimedia materials and more. It also has permanent exhibitions of art on the lower floor.
Image Courtesy of Wikimedia and Zereshk.
5

The University Pedestrian Mall connects Hodges Library and the Humanities Department. This granite walkway features an amphitheater, green space and the UT seal. Formerly named the Joe Johnson and John Ward University Mall, this walkway is the site of several major university events.
Image Courtesy of Flickr and Mike O'Neil.
6

Clarence Brown Theatre, built in 1970 as a non-profit venue of the UT Department of Theatre, features a variety of plays each season, sometimes including famous guest artists. It also houses the small Lab Theatre for experimental performances. Next door, the smaller Carousel Theatre is a round venue with mobile seats, the first of its kind.
Image Courtesy of Flickr and slider5.
7

7) University of Tennessee Gardens (must see)

The University of Tennessee Gardens, adjacent to the UT Institute of Agriculture, was founded in 1983 by the Department of Plant Sciences, with an additional location in Jackson, Tennessee. This horticultural garden is an open laboratory and an All American Selections test site for the study of geologic compositions and a variety of flora. It offers free admission, guided tours and sometimes special events.
Image Courtesy of Flickr and Joel Kramer.

Knoxville is home to over 450 churches of many religious denominations. Situated at the core of the Bible Belt, many of them are Protestant. The following tour highlights the city’s most impressive religious sites, including Knoxville’s oldest church and other historically significant ones.