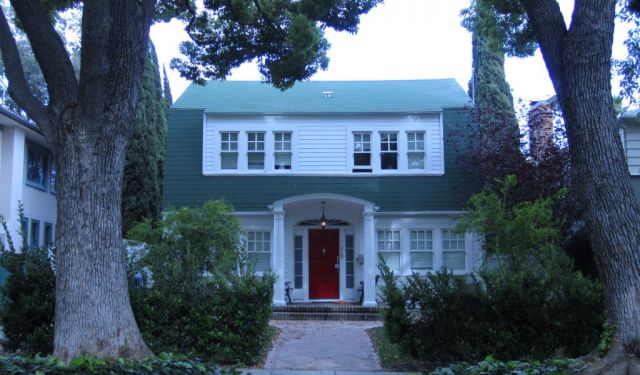 Amidst the glitzy glamour of LA lies a fascinating dark underbelly filled with murders, suicides and debauchery dating back nearly a century. View the homes where iconic Hollywood stars like Jean Harlow met their untimely demise, as well as those homes that are just plain infamous. Starting in Hollywood and ending in Beverly Hills, tour this keen selection of unusual landmarks and residences of the famous and infamous who lived here.
This article is featured in the app "GPSmyCity: Walks in 1K+ Cities" on iTunes App Store and Google Play. You can download the app to your mobile device to read the article offline and create a self-guided walking tour to visit the attractions featured in this article. The app turns your mobile device into a personal tour guide and it works offline, so no data plan is needed when traveling abroad.

This apartment building is the last known residence of Elizabeth Short, better known as the Black Dahlia – undoubtedly the most famous unsolved murder in Los Angeles History. Elizabeth Short who was found dismembered in a vacant lot in the Leimert Park neighborhood of LA which would now be considered South Central LA. Ironically this block is now filled with picturesque middle class homes. Unsolved to this day, there’s been ample speculation over the years, yet researcher and writer Larry Harnisch’s theory of the USC surgeon, whose daughter knew Elizabeth’s sister, seems most plausible. Elizabeth reportedly lived in this Hollywood apartment only a few months prior to her death and is only steps from the Kodak Theater and the touristy Hollywood and Highland shopping complex. She also is said to have lived above The Florentine Gardens nightclub, which still stands, just down the street at 5951 Hollywood Blvd., and is reportedly haunting the Biltmore Hotel downtown which is where she was last seen.
2

Janis Joplin lived at the Landmark Motor Hotel, now the Highland Gardens Hotel, for a short time while recording her final album, "Pearl" in the summer of 1970. She was recording at Sunset Sound Recorders, where Rolling Stones had recorded Exile on Main Street, and the Beach Boys recorded Pet Sounds, among many others. It was here, in room 105 where she accidentally overdosed on heroin. It is speculated that Janis had accidentally been given a much more potent form of heroin than she was used to, given that several of her dealer's other customers also overdosed around that same week. In her will, Janis set aside $2,500 for her wake, and the invitations read “Drinks are on Pearl” while the Grateful Dead provided the entertainment.
3

3) "Halloween" Houses - The Scene of the Murders / The Doyle House

Sitting adjacent to each other are the two homes used during the filming of the 70’s horror classic Halloween. The house at 1537 was the Wallace’s home and the scene of the murders, 1530 was where Laurie Strode’s character, played by Jamie Lee Curtis, babysits the Doyle kids. The Myers house at the beginning of the film is located in South Pasadena at 1000 Mission Street. Apparently just as run down and decrepit as in the movie, the entire cast and crew pitched in to clean the old house in preparation for the filming of the movie’s early scenes with a young Michael Myers. Both homes are currently private residences, while the Myers home, in Pasadena is a chiropractor’s office.
4

This creepy home is located in the historic Spaulding Square Neighborhood of Hollywood, and was used in the filming of "Nightmare on Elm Street". Spaulding Square is a small, quiet residential community situated just off Sunset Blvd. consisting of about 160 single family homes and literally encompassing only a few blocks. This tiny neighborhood is named after California architect, Albert Spaulding, who developed the area between 1916 and 1926. Most of the early residents were silent film stars and directors. In an interesting side note, New Line Cinema was reportedly saved from Bankruptcy thanks to the success of the film. The home is a private residence.
5

Dorothy Dandridge died in her West Hollywood apartment of a drug overdose at the age of 42. In September of 1965 Dorothy was discovered by her manager, Earl Mills, her in unit D2, (which faces Fountain Ave.) on the eve of him re-launching her career, as she was scheduled to fly to New York the next day to start an exclusive nightclub engagement. In her later years Dorothy was depressed and in debt, and forced to leave her disabled daughter in a mental institution. The medical examiner had later determined that she had overdosed on a common anti-depressant.

Dorothy was cremated and her ashes interred in the Freedom Mausoleum at Forest Lawn Cemetery in Glendale, California. Many celebrities are buried here, including most recently Michael Jackson and Elizabeth Taylor. Others that share the same mausoleum space with Dandridge include Clara Bow and Nat King Cole, as well as George Burns and Gracie Allen, entombed together.

This is the West Hollywood Apartment where actor Sal Mineo, made famous for his performance in "Rebel Without a Cause" lived and died. He was stabbed in the alley behind this apartment building during an apparent robbery attempt by a 19 year old pizza delivery man. Sal had recently moved to Los Angeles from San Francisco for the LA engagement of his hit play "P.S Your Cat is Dead", in which he co-starred. The night of his death he was walking home after a late night rehearsal when he was attacked. Sal’s tragic death represents the alleged “Rebel Without a Cause Curse” that had also claimed the young lives of co-stars Nick Adams, Natalie Wood and James Dean.
7

7) The Death of Dominique Dunne

Actress and daughter of journalist Dominick Dunne and sister to actor Griffin Dunne, was strangled by her on again off again boyfriend in the driveway of her WEHO bungalow. She later died at Cedars Sinai Hospital after being in a coma for five days. Dunne was buried in Westwood Village Memorial Park near family friend Natalie Wood. Ironically, in 1988 Heather O'Rourke, Dunne's young "Poltergeist" costar, was also buried close to her. Dominique is part of the supposed “Poltergeist Curse”, where numerous actors and crew associated with the trilogy had died tragically and unexpectedly. Other notables buried at Westwood Memorial Park include Marilyn Monroe, Jack Lemon and Dean Martin and Frank Zappa who lies in an unmarked grave.
8

8) The Murder of Rebecca Schaeffer

This is the Tudor style apartment building of the 80’s TV actress and star of "My Sister Sam", Rebecca Schaeffer. It was here, at the buildings front entrance, where she was shot and killed by a deranged fan, Robert Bardo. He was able to ascertain her address through a hired private investigator and showed up unannounced at her front door. After a cordial initial meeting and handshake, he walked to Jan’s Restaurant which is a diner only a few blocks up the street on Beverly. He then returned a short time later and shot her at the front door of her apartment building. Marsha Clark prosecuted Bardo before famously prosecuting OJ Simpson a few years later. The apartment is only a few blocks from the famous Farmers Market and The Grove complex.
9

Practically next door to Jean Harlow's last home stands the adorable ivy covered cottage built in 1927 where Joe and Marilyn lived during the short duration of their marriage. The famous press conference held by Marilyn and her lawyer in 1954 regarding the divorce took place right in front of this house. The Daily News headline read “Marilyn Splits With Joe Over Sexy Pictures” as only a few months prior, Joe was present at the New York City filming of the famous skirt blowing scene in "The 7 Year Itch", which had resulted in a much publicized fight between the couple. Marilyn would die 8 years later in her Brentwood home, which happens to be within close proximity to Nicole Brown Simpson’s condo.

In 1937, Jean Harlow died in this home of kidney failure at age 26. A bout with scarlet fever as a child is said to have lead to her condition of Nephritis. It was believed that her mother Jean, a strict Christian Scientist, refused any treatment for her daughter due to her beliefs. It is true however that her mother refused any friends or MGM associates including the doctor MGM had hired to look after Jean, into the home. This lead to the false presumption that Jean was alone and suffering without any medical care. Jean had already met tragedy in her early 20’s after the suicide of her then husband, MGM movie producer Paul Bern, in their Benedict Canyon home. Jean never publicly spoke of Bern or the matter for the rest of her life. Rita Hayworth is reported to have lived in the home on Palm Drive soon after.
11

This Beverly Hills Mediterranean mansion is where Lyle and Erik Menendez shot and killed their parents, Jose and Kitty Menendez in the summer of 1989. Jose moved his family to California from Princeton, New Jersey after getting a job at Carolco Pictures, which produced blockbusters like "Terminator 2" and "Rambo". The brothers contested that lifelong abuse had led them to the killings, but their past criminal records and lavish spending immediately following the murders contradicted their defense and were subsequently found guilty. Interesting fact is that the home is located directly behind the former homes of Walter Winchell, George Burns and Simon Cowell, and the house itself had been rented to such luminaries as Prince and Elton John.