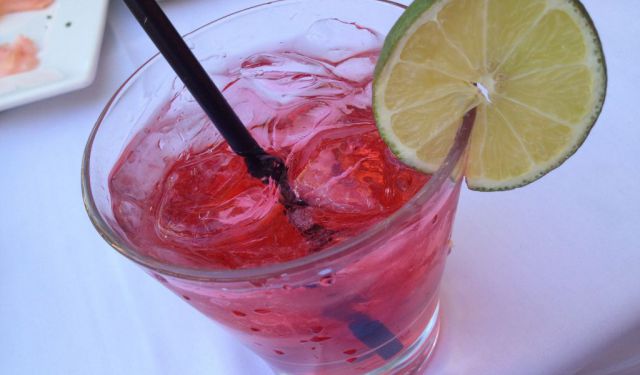 This crawl runs through Fushimi and Sakae, the down town area of Nagoya. It is a real mixed bag and every establishment has a different vibe and (more importantly) menu. All of the bars are gaijin friendly and each would be a decent place to have a meal.
This article is featured in the app "GPSmyCity: Walks in 1K+ Cities" on iTunes App Store and Google Play. You can download the app to your mobile device to read the article offline and create a self-guided walking tour to visit the attractions featured in this article. The app turns your mobile device into a personal tour guide and it works offline, so no data plan is needed when traveling abroad.

First off is one of the best known English pubs in Nagoya, a big bar called The Elephants Nest. The Elephant’s Nest is one of the only places in Nagoya to have a real darts board (instead of the electronic variety), as well as drinks so odd, it’s not out of the question to see a dead snake trapped inside a bottle of booze. Each month there are special drinks and foods on offer, advertised on the chalkboard on the left hand side of the bar. The staff are amazingly friendly and great at English, but the food is far from delicious and the place itself is a little run down…but these 2 facts alone make The Elephant’s Nest the most authentic English pub in Nagoya.
2

Stop number 2 is another English bar, but as different to The Elephant’s Nest as chalk is from cheese. The place has a tiny sign outside and an old archaic oak door, a rather nondescript exterior which can be a little hard to fine, but if you do, it will be one of the best reasons to never judge a book by it’s cover. Beyond the door is a brick staircase which leads you down into a basement/courtyard, behind which is huge, underground bar that is possibly one of the classiest English themed bars in Nagoya. It is a touch expensive, but has a huge selection of whiskies (single malts and blends), gins, vodkas and anything else you could dream to ferment. The food is also delicious, but the portions may seem a little on the small side compared to other places. It is rather expensive, but it offers up a more sophisticated and mature version of English culture (it has pictures of Shakespeare instead of John Lennon), a fact not wasted on Nagoya’s football team, Nagoya Grampus, who are rumoured to frequent Igirisuya.
3

Shooters is a lively sports bar with pool, table football and free electronic darts. The menu is a great selection of American diner and party foods, all of which are served up with gusto and portions so big the food spills off the plate. There is also a wide selection of bottled beers and cocktails, which bring in a large crowd every weekend. It may seem a little expensive, but the real crutch of the matter is that cash-on-delivery is not an option, instead a waiter will take your order at the table and give you a bill to pay on your way out. It may seem convenient to be able to avoid the bar, but if you’re drinking with friends who sooner split hairs than split bills, you may be in for trouble. Also, on busier nights you may be waiting a little while for your orders and wishing you could just stroll up to the bar and get it yourself.
4

Once you’ve finished at Shooters,you can head to one of the busiest bars in Nagoya, Sakae’s Hub. Like the Nagoya Hub, it is very gaijin friendly, with cheap food and drinks, English menus and English speaking staff. Unlike the Nagoya Hub, it seems to be a popular hangout for guys hoping to pick up girls and the odd female willing to comply. It is a friendly place but has a slightly sleazy feel to it, especially between the witching hours of 4:00am-5:30am when clubbers are hanging out waiting for the first train home.
5

Opposite the Sakae Hub is a tiny Mexican bar, Bar Mexigan, a relatively new establishment that has great cocktails, more tequila than you could possibly try in one night and cheap (if not spectacular) Mexican food. There is a happy hour between opening and 7, but even if you miss this, it should still seem like a reasonable tariff. It is a cool little place with an interesting décor, a mini, artificial desert under glass flooring is just one of it’s oddities. On warmer nights the bar opens up and the crowds spill out into the street via the usage of cheap garden furniture. It is a nice balance between being cheap and a little different, but if you are looking for authentic Mexican cuisine, you may leave a little disappointed.
6

This crawl`s wild card is American Dining Bar BJ, a place that welcomes you with the subtle humming of garish, neon lights, which mark the entrance to this American Diner, where the slightly pricey food and drinks are served by cowgirls wearing little else besides a cute smile. On Friday nights there is a free pole dancing performance on the bar, but somehow BJ avoids being too untoward, as the staff are very friendly and any sexual implication is played off as a harmless gimmick. Insides there is table football, darts boards and flat screen TVs, but the place also charges an entrance fee and service charge, so don’t be too upset when the bill arrives. BJ is very welcoming to both male and female customers and seems a popular place to have a birthday party, as the lights often dim down as an attractive waitress approaches the birthday boy/girl with a delicious looking cake and enough energy to get everyone in the bar singing “Happy birthday to you.” Don’t let the name discourage you either, Westerners may be a little anxious to enter somewhere called BJ, but the staff have reassured me that BJ stands for Big Joy.