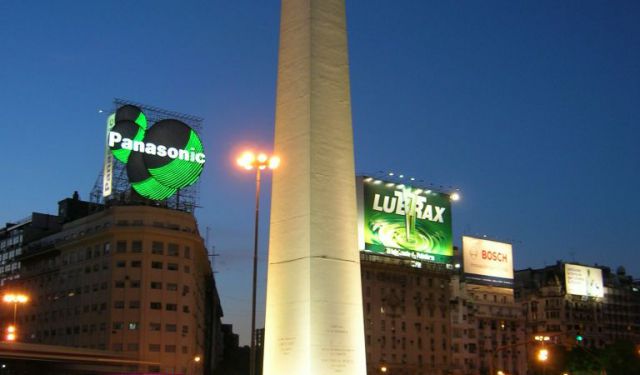 This audio-narrated walking tour makes it easy for you take in the classic picture-postcard sights of Buenos Aires city centre while also helping you discover the Argentinean capital's lesser known, but equally as fascinating and historic, buildings and monuments.
This article is featured in the app "GPSmyCity: Walks in 1K+ Cities" on iTunes App Store and Google Play. You can download the app to your mobile device to read the article offline and create a self-guided walking tour to visit the attractions featured in this article. The app turns your mobile device into a personal tour guide and it works offline, so no data plan is needed when traveling abroad.

Create Your Own Self-Guided Walks in Buenos Aires
Guide Name: Landmarks
Guide Location: Argentina » Buenos Aires
Guide Type: Self-guided Walking Tour (Article (A))
# of Attractions: 10
Tour Duration: 2.0 Hour(s)
Travel Distance: 6.1 Km or 3.8 Miles
Author: Paul Costello
Author Bio: My name is Paul Costello, I am 33 years old and I have lived in the city of Buenos Aires for almost a year. I moved here from the north of England after falling in love with the city’s architecture, vibrant nightlife and passionate people. I am a journalist by trade and have worked for the BBC as well as newspapers in the UK.
Sight(s) Featured in This Guide:
1

The Congress building houses the legislative branch of the Argentinean government, with the executive being sited in the Casa Rosada at the other end of Avenida de Mayo. It was inaugurated in 1906 and currently has a 72-seat Senate and 257-seat Chamber of Deputies. An annex was added to the building in 1974 to provide room for the offices of the deputies. Plaza Congreso, which faces the building, was opened in 1910 and although it still retains hints of its former grandeur it is now in places rather scruffy and noisy traffic passes it on all sides. It does however, play an important role in housing public demonstrations designed to pressure the law makers inside Congress. For instance, thousands of supporters and opponents gathered in the plaza in 2010 to hear that the Senate had passed into law an act legalising gay marriage.
2

A combination of the height, size and the freakish beauty of this building make it difficult to take in at first sight. Italian architect Mario Palanti took inspiration for his design from Dante’s Divine Comedy in dividing the building’s 22 floors into three sections representing hell, purgatory and heaven. The basement and ground floor take the unenviable honour of symbolising hell, while floors one to 14 are purgatory and 15 to 22 are heaven. A lighthouse, which symbolises God, is based at the top of the 328-feet height structure. Palanti was commissioned by Italian immigrant and textile merchant Luis Barolo and the building, which was the tallest in South America until the Kavanagh Building was unveiled downtown, was finished in 1923. It still retains its original purpose as offices and guided tours can be requested at the reception.
Image by José María Pérez Nuñez under Creative Commons License.
3

The Obelisco, which was built in 1936, is one of Buenos Aires' most iconic sights. Standing at 221-feet tall the monument dominates the city centre skyline for pedestrians and motorists on Avenida Nueve de Julio, Avenida Corrientes and Diagonal Norte. Its four faces are each inscribed with different significant dates in the history of the city - the first foundation of Buenos Aires in 1536, the second foundation in 1580, the first flying of the Argentinean flag in the city in 1812 and the establishment of the city as the national capital in 1880. Despite initially being unpopular with the local populace, with some even calling for it to be knocked-down, it has grown overtime to become a focal point for celebrations in the city. Indeed, it recently provided the backdrop for a huge stage erected as Argentina celebrated its bicentennial.
4

The Teatro Colon is world renowned for the exceptional acoustics created by the size and design of its main hall. The list of great singers, composers and dancers who have performed at the theatre since its opening in 1908 is exhaustive. Among just some of the names to have starred there are Strauss, Stravinsky, Pavarotti, Maria Callas, Nijinsky and Nureyev. When the original Teatro Colon, which faced Plaza de Mayo, closed to become the Banco National in 1888 the city government hoped to unveil its replacement on its current site four years later. However, despite work starting the next year, it was not until almost 20 years and three chief architects later that the building was completed. This ‘tradition’ of delays and rows was continued into the 21st Century when its doors were closed to the public in 2006 for a major refurbishment scheme. The theatre was supposed to reopen in May 2008, marking 200 years since its inauguration, but it remained encased in scaffolding until 2010 when it was re-inaugurated as part of the bicentennial celebrations.
Image by Gobierno de la Ciudad de Buenos Aires under Creative Commons License.
5

Ledged has it that millionairess Corina Kavanagh plunged massive sums of her inheritance into constructing this 394-feet high building to avenge a upper-class Buenos Aires family who had snootily disapproved of her daughter’s engagement to their son. It is said she promptly had the modernist, art deco style 32-storey skyscraper designed in order to block the view from their family’s palatial home of their newly built church across Plaza San Martin. The Kavanagh Building was opened in 1936 and stole the crown as the tallest building in South America from Palacio Barolo on Avenida de Mayo. The building’s 105 apartments were designed for the luxury market and Corina Kavanagh lived there for many years after moving into an apartment which took up the entire 14th floor.
Image by Dubstar under Creative Commons License.
6

This 248-feet high clock tower was presented to the city in 1910 by its British community, many of whom had settled in Buenos Aires after coming to build the nation’s railway network. The gift was in order to mark Argentina’s centennial celebrations. It is decorated with symbols of the British Isles and above its doors there are shields of Great Britain and Argentina together with an inscription that reads: “Health to the great people of Argentina from the British residents May 1810 - 1910.” Following the 1982 Falklands War between the two nations the tower was renamed Torre Monumental and the square in which it stands changed from Plaza Britanica to Plaza Fuerza Aerea Argentina. The tower has eight floors and visitors can reach the top by taking an elevator. A small museum displaying photographs is also open to the public.
Image by Miguel A. Monjas under Creative Commons License.
7

This central post office building was opened in 1928 after rows, various budget cut backs and design alterations delayed both the planning and construction process over a period of almost 40 years. Built in a French architectural style on reclaimed land from the River Plate, it was the largest public building in Argentina on its opening, with visitors being wowed by its grand main hall of marble, stained glass windows and statues. Eva Peron used a wing of the building for a time as the first headquarters of her charitable organisation after her husband was elected president. Indeed, during this period most of its postal duties were moved to another building. Its final post office bureau closed in 2005. The palacio, which was declared a National Historic Monument in the 1990s, is now being transformed into a Bicentennial Cultural Centre as part of an ongoing scheme to renovate the building.
Image by Barcex under Creative Commons License.
8

The Pink House, which houses the offices of the President of Argentina, has witnessed many momentous events in the history of the nation. It was from its balcony in 1945 that General Juan Domingo Peron effectively sealed his path to the presidency, after the country’s military leaders, who had early arrested him, were forced allow him to address a crowd of up to 300,000 people calling for his release. His wife Eva Peron would later make the balcony world famous with her passionate addresses to the Argentine public. The building also served as the focal point for protest as the nation experienced the darkest chapter in its history during a brutal military dictatorship which is estimated to have killed as many as 30,000 people from 1976 to 1983. It was under these circumstance that the Mothers of Plaza de Mayo group bravely began to gather outside the building each week to demand information on their missing sons and daughters. The building took its present form in the late 1800s when an archway was built to link a government palace with an elaborate post office. It is based on the site of two old forts, the first of which was founded in 1594. Some say it was originally painted pink in the late 19th Century as cows blood was purposely mixed into the paint to protect the building from the city’s humid climate. However, others say it was painted pink to appease the two main political parties of the time whose rival colours were red and white.
9

Six churches have been built on this site since Spanish conquistador Juan de Garay allocated the land for the first structure in 1580. Construction of the present cathedral was begun in 1753 and it took until the early years of the 20th Century to complete some of its internal features. Its dome was completed in the 1770s, while the façade’s 12 columns were built during the 1820s and the external decoration, showing the reunion of Joseph with his brothers and fathers in Egypt, was added between 1860 and 1863. As a result of this elongated construction period the cathedral is a patchwork of different architectural styles. Its mausoleum contains the remains of the liberator General Jose de San Martin, which were brought there from France in 1880. He fought to free Argentina, Chile, and Peru from Spanish control and is regarded in Argentina as one of the ’Fathers of the nation”.
10

The original Cabildo building was completed in 1610 to house the city council of the then small Spanish settlement in Buenos Aires. As the colony began to grow in the 18th Century the need for a more spacious building became apparent and a new Cabildo was eventually inaugurated in 1740. Following the 1810 May Revolution the building witnessed the first appointment of a council in the city independent from Spain. It has undergone numerous modifications since its construction and it lost six of its original arches to make way for the creation Avenida de Mayo and Avenida Julio A Roca in the late 19th and early 20th centuries respectively. Restoration work in the 1940s saw the return of many of its former colonial features. Today the building is the site of the National Museum of the Cabildo and the May Revolution.