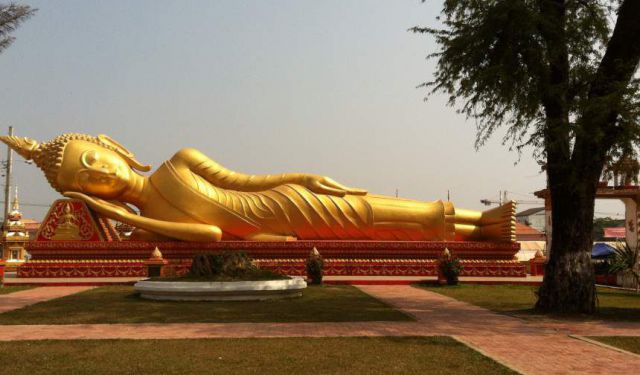 5 Reasons to Visit Vientiane in Laos, Vientiane, Laos (B)

If you want to experience the old Asia first hand, this charming laid-back colonial capital city has a lot to offer the visitor. Many travellers will only give Vientiane a 24-hour stopover on the way to visit many of the unique destinations that Laos has to offer. We highly recommend spending at least a few days in and around the capital to sample the cuisine, the locally grown Laos coffee, monuments, markets and the riverfront in the evening.

Vientiane has had a turbulent past and the Vietnamese, Khmer, Burmese, Siamese and the French all have had a hand in its history. In 1560 King Setthathirath relocated the capital from Luang Prabang in the north to the present location of Vientiane. In 1893 Laos was passed to French rule and became a protectorate in 1899 and in 1953 it sought independence from France after several successful campaigns led by local independence groups.

Unfortunately, during the Vietnam War, Laos became the most heavily bombed country, many villages were destroyed and thousands were displaced. After the government of Laos introduced market reforms in 1988 Laos has grown rapidly as a nation and tourism is its fastest growing industry. It is one of the poorest countries in South East Asia but one of the friendliest that we have visited. ...... (follow the instructions below for accessing the rest of this article).
This article is featured in the app "GPSmyCity: Walks in 1K+ Cities" on iTunes App Store and Google Play. You can download the app to your mobile device to read the article offline and create a self-guided walking tour to visit the attractions featured in this article. The app turns your mobile device into a personal tour guide and it works offline, so no data plan is needed when traveling abroad.