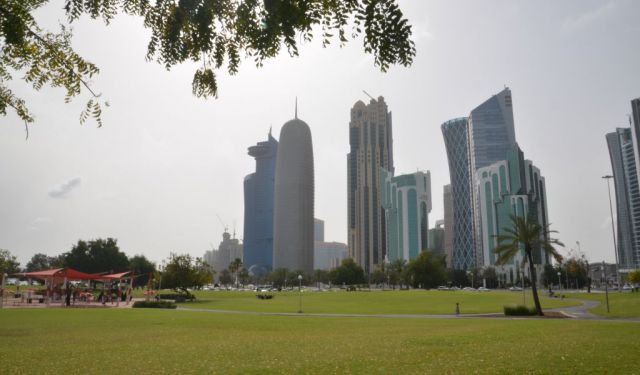 I’m sure most of you have heard of Dubai, but Qatar may not be on your radar, unless of course you’re a soccer fan. In which case you’ll be aware the FIFA World Cup will be held there in 2022. I’m not going to dig any deeper on that, just please don’t judge a place or its people until you’ve been there.

Dubai is leading the field in this area in the development of tourism but Qatar is not far behind, and with all the positivity and enthusiasm I’m sure they will soon be not far behind. The good thing about Qatar is that whilst it isn’t cheap, it isn’t prohibitively expensive so try it now before the crowds.

The modern hi-tech airport in Doha is an award winner and their staff are probably the friendliest airport staff I’ve come across. I’m impressed as I’m sure it’s not easy to keep your calm when stressed travellers are shouting in every language you can imagine. The taxi rank is easy to find, the taxis are all aqua blue.

You’ll no doubt be ferried down the city centre roads which are 6 lane motorways. They are packed with the biggest variety of 4x4s doing U turns and lane jumping you’ll see. If you don’t need to drive, don’t, it’s a skill here so let the taxis take the strain. The taxi drivers are mostly Indian, I asked ours if he liked driving in Doha or India. He laughed, much preferring Doha, as in India he advised us the traffic is just as chaotic but there are people, cattle, dogs and tuk-tuks as well. He thought the actions of the Ferraris, Bentleys and 4x4s were much easier to predict! ...... (follow the instructions below for accessing the rest of this article).
This article is featured in the app "GPSmyCity: Walks in 1K+ Cities" on iTunes App Store and Google Play. You can download the app to your mobile device to read the article offline and create a self-guided walking tour to visit the attractions featured in this article. The app turns your mobile device into a personal tour guide and it works offline, so no data plan is needed when traveling abroad.