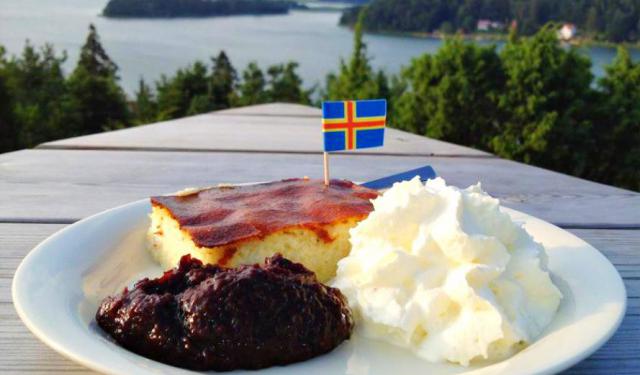 A FINNISHing Touch To Pastry Making, Helsinki, Finland (B)

Korvapuusti (Finnish for "slapped ears") are essentially perfectly baked sweet buns of cinnamon and cardamon-spiced yeasted dough with plenty of butter, generously sprinkled with pearl sugar on top! Quite similar to the American cinnamon rolls, korvapuusti are not exactly the same – they are simpler to make and, in some opinions, taste better. Their lovely smell makes them an ideal pair for a nice cup of coffee!

Leipäjuusto or Juustoleipä ("cheese bread" or "bread cheese"), also commonly referred to as the "Finnish Squeaky Cheese," is a several centimeter-thick circle of cheese baked over an open fire. Most often it is made of cow’s milk, but sometimes reindeer's or goat’s milk is also used. This mild bread cheese boasts a very unique texture, to attain which the milk is first curdled and then fried or baked in a pie tin, upon which it is cut to wedges. Leipäjuusto is traditionally eaten with a cloudberry jam, but nowadays strawberry or raspberry jams are also applied quite often, producing a great sweet and sour combination. A weird thing is that, back in the day, it was such a valued delicacy in Finland, that oftentimes, seasonal workers in the field would get their wages paid in-kind with bread cheese. Today, the dish is still very much popular, often eaten as a dessert, cold or hot, paired well with coffee! ...... (follow the instructions below for accessing the rest of this article).
Image Courtesy of Toyah.
This article is featured in the app "GPSmyCity: Walks in 1K+ Cities" on iTunes App Store and Google Play. You can download this article for FREE and read it offline on your mobile device.