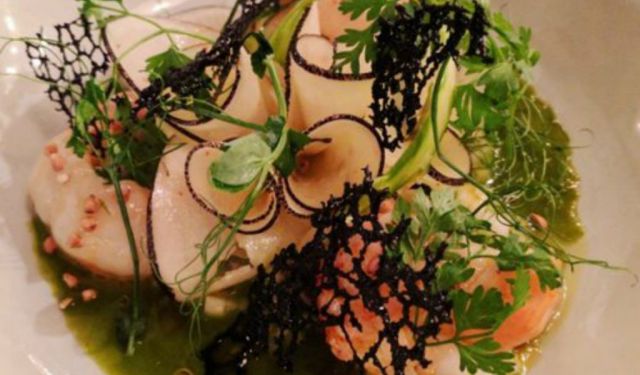 A Foodie’s Guide to Paris, Paris, France (B)

Paris: City of Lights, City of Love, Gourmet Capital of the World… But better known to me as the first place I lived after leaving home aged 18. I was studying at the Cordon Bleu school. I don’t remember all that much about those three months except for nursing an unrequited crush on an incredibly posh boy with a double-barrelled surname, and getting into trouble with French chefs in enormous white hats for not following their recipes properly. 18 years later (good grief, that was half my lifetime ago?!) and French chefs still aren’t too impressed with my laissez-faire attitude towards cooking (more on that later), but at least I seem to have got past the unrequited-crushes-on-posh-boys phase.

Despite its down-to-earth interior, L’Ami Jean is undoubtedly serving some of the best food in the Paris, which is probably why it was recently lauded as one of the top 100 bistros in the city.

I’ve been lucky enough to visit Paris twice in the past month or so – once under my own steam, and once as a guest of the City of Paris Tourism Office. I can only assume that in the wake of the recent terrorist attacks the city is struggling to attract as many visitors as it used to. Plus, now that European cuisine has strongholds in Copenhagen, London and San Sebastian (to name just a few of the more recent “foodie cities”) gastronomy in Paris doesn’t have quite the same reputation it used to. That’s a shame, because there are still plenty of reasons – culinary and otherwise – to visit the French capital. I’m bringing you just a few of them in my Paris Food Guide. ...... (follow the instructions below for accessing the rest of this article).
This article is featured in the app "GPSmyCity: Walks in 1K+ Cities" on iTunes App Store and Google Play. You can download the app to your mobile device to read the article offline and create a self-guided walking tour to visit the attractions featured in this article. The app turns your mobile device into a personal tour guide and it works offline, so no data plan is needed when traveling abroad.