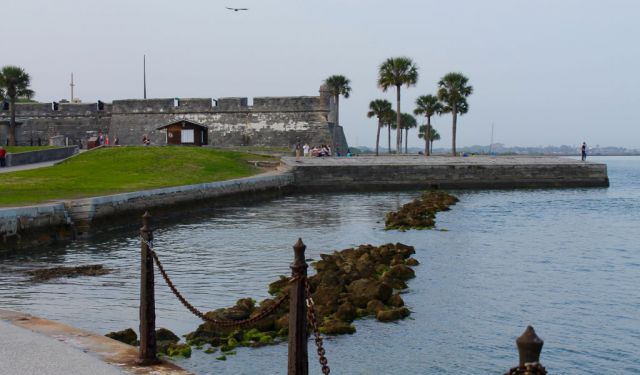 Saint Augustine, Florida. The oldest city in the United States. Founded in 1565 by Spanish explorer Pedro Menéndez after defeating the native Seminoles and stealing their land, the city once served as a seaport as well as the foothold on colonization of the land mass that we now call the United States. Today it is a quaint tourist town boasting a wide variety of shops, historical attractions and scenic walks that seem like something from a movie set.

While it is a much less popular Florida destination than Miami, Fort Lauderdale or Daytona Beach, Saint Augustine hosts history, culture, shopping and a beautiful beach, all perfect for the Florida traveler who wants a change of scenery and access to corny war re-enactments. Located less than an hour south of Jacksonville, getting there from the Jacksonville airport is easiest by rental car, and for lodging there is a plethora of small hotels and charming bed and breakfasts scattered within the small city.

The old town is shaped by the intracoastal waterway, with beautiful boats filling up the marina. The Castillo de San Marcos, a historic Spanish fort sits on the waterfront and is available to tour, providing a glimpse into the history of the founding of the city as well as ceremonies of shooting off cannons and re-enactments. ...... (follow the instructions below for accessing the rest of this article).
This article is featured in the app "GPSmyCity: Walks in 1K+ Cities" on iTunes App Store and Google Play. You can download the app to your mobile device to read the article offline and create a self-guided walking tour to visit the attractions featured in this article. The app turns your mobile device into a personal tour guide and it works offline, so no data plan is needed when traveling abroad.