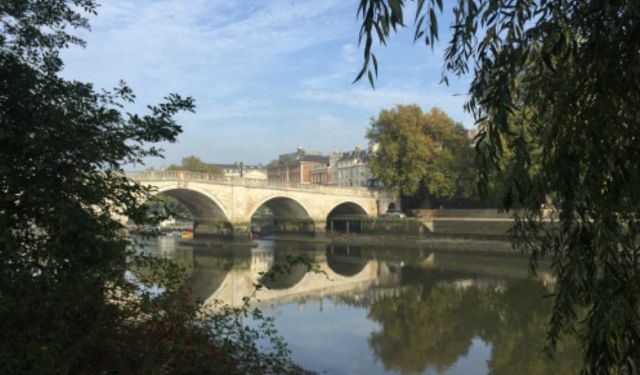 A Walk from Eel Pie Island, Twickenham to Richmond Bridge, London, England (B)

Most people associate Twickenham with rugby. As home to England Rugby with a stadium that seats a crowd of 82,000 for a big match, it’s most visitors’ reason for coming here. However, Twickenham has other claims to fame and just a fairly short walk along the Thames from Eel Pie Island, just off the high street in Twickenham, to Richmond Bridge (about 3km/2 miles) is a good indicator of all that Twickenham has to offer in terms of history and a beautiful location in SW London.

I set off soon after 9am this morning. It had been a foggy start as you’ll see from my photos, but by the time I got to Richmond Bridge, the fog had pretty much burned off revealing sun, blue skies and the promise of a fine autumn day. It takes me about 10 minutes from my house to head down to the centre of Twickenham where from King Street, I took a side road – Wharf Lane – down to the Thames and saw Eel Pie Island in front of me.

It’s said that Eel Pie Island may have been a ‘courting’ ground for Henry VIII. It gained its name from as far back as the 17th century when day trippers picnicked on pies made from locally caught eels. In more recent history, it became a famous venue for music in the 1960s when fans flocked to its hotel to hear bands such as The Who and the Rolling Stones when they were starting out. ...... (follow the instructions below for accessing the rest of this article).
This article is featured in the app "GPSmyCity: Walks in 1K+ Cities" on iTunes App Store and Google Play. You can download the app to your mobile device to read the article offline and create a self-guided walking tour to visit the attractions featured in this article. The app turns your mobile device into a personal tour guide and it works offline, so no data plan is needed when traveling abroad.