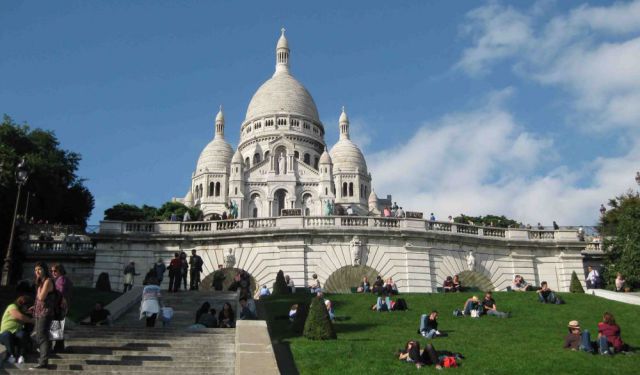 Adventures in Paris, Paris, France (B)

My money clip stolen, a sprained ankle, and Petey going to doggie heaven all in a month…that was enough for a spur of a moment trip to France! I joined some friends for drinks during the floods in Colorado when I found out one was visiting France and Spain in just six days.

So that’s where my journey began. Six days before takeoff, Theresa didn’t have a plan or any reservations…only her plane ticket, and aside from picking hotels four days before we boarded the plane, that’s the way our trip remained. We took recommendations from friends and obviously focused on the tourist highlights and began our adventure to France…our first stop Paris!

To get a ticket on Theresa’s plane connecting through Chicago was going to costs $5,000, so I flew with a longer flight time but for SUBSTANTIALLY less money, and we met up at Charles De Gaulle. I was to land 30 minutes after Theresa, but after her delays I cooled my heals by the bathroom outside customs waiting on her. That was our only plan so far. ...... (follow the instructions below for accessing the rest of this article).
This article is featured in the app "GPSmyCity: Walks in 1K+ Cities" on iTunes App Store and Google Play. You can download the app to your mobile device to read the article offline and create a self-guided walking tour to visit the attractions featured in this article. The app turns your mobile device into a personal tour guide and it works offline, so no data plan is needed when traveling abroad.